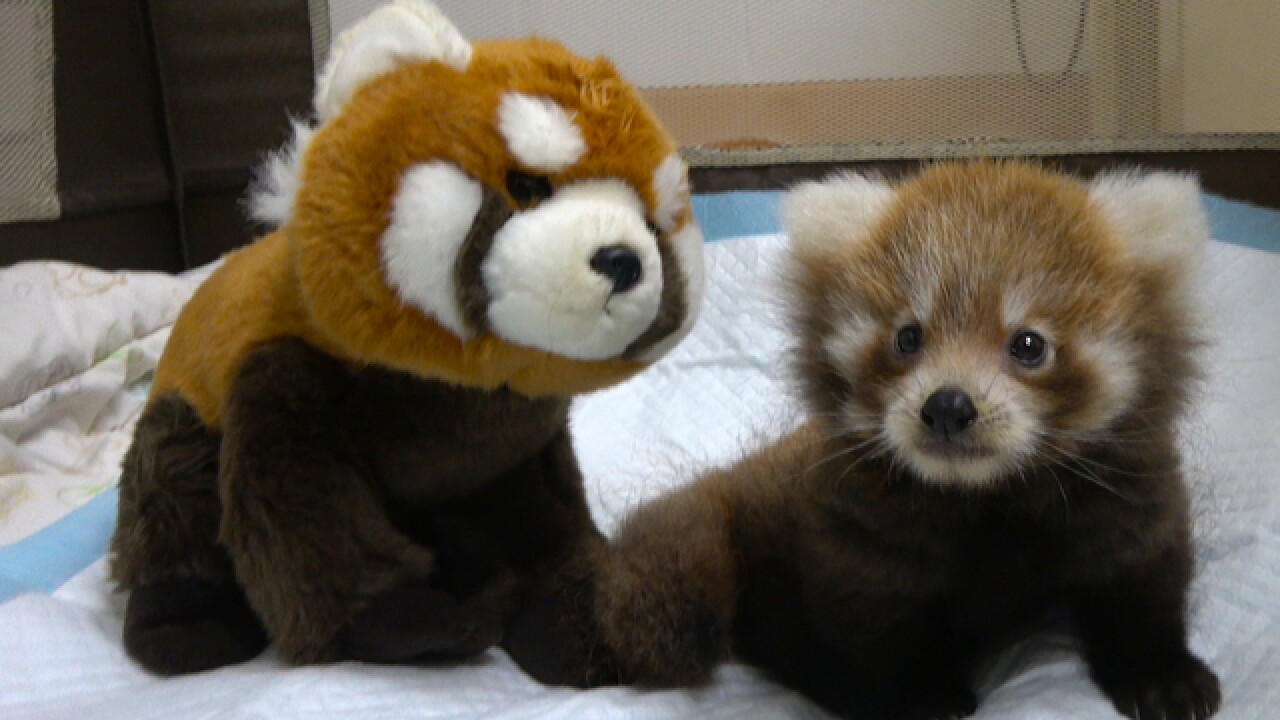 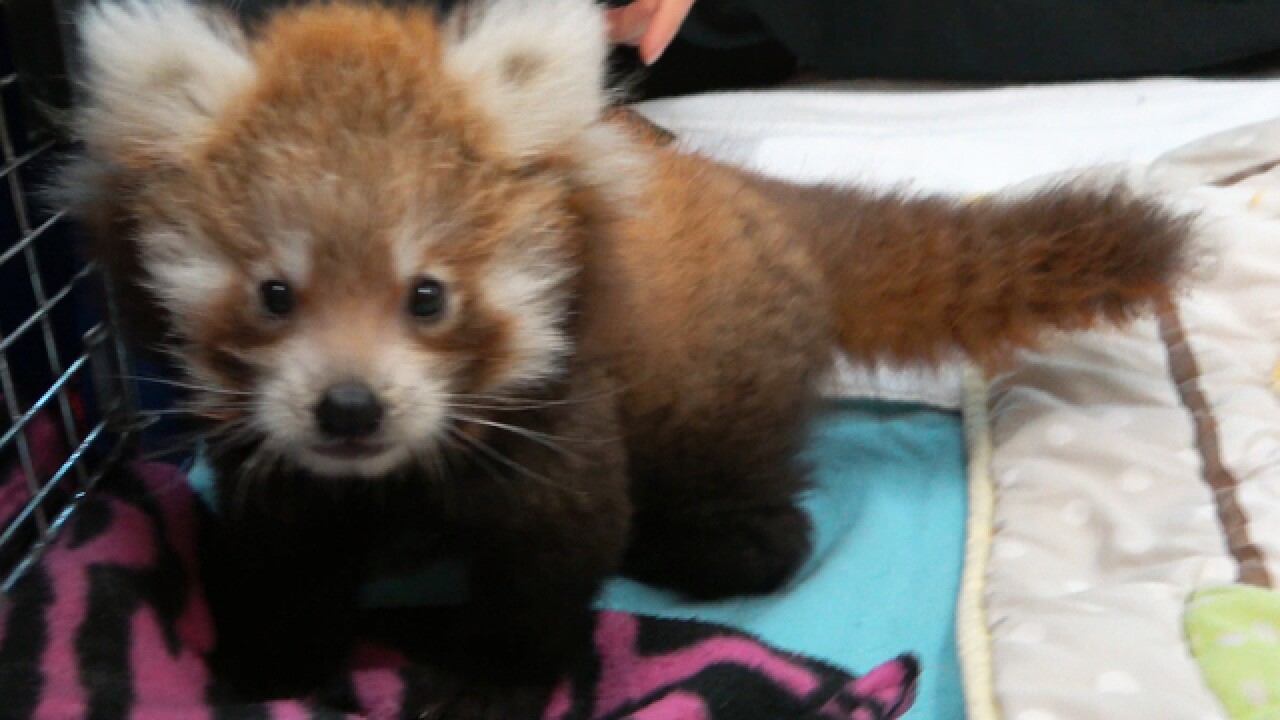 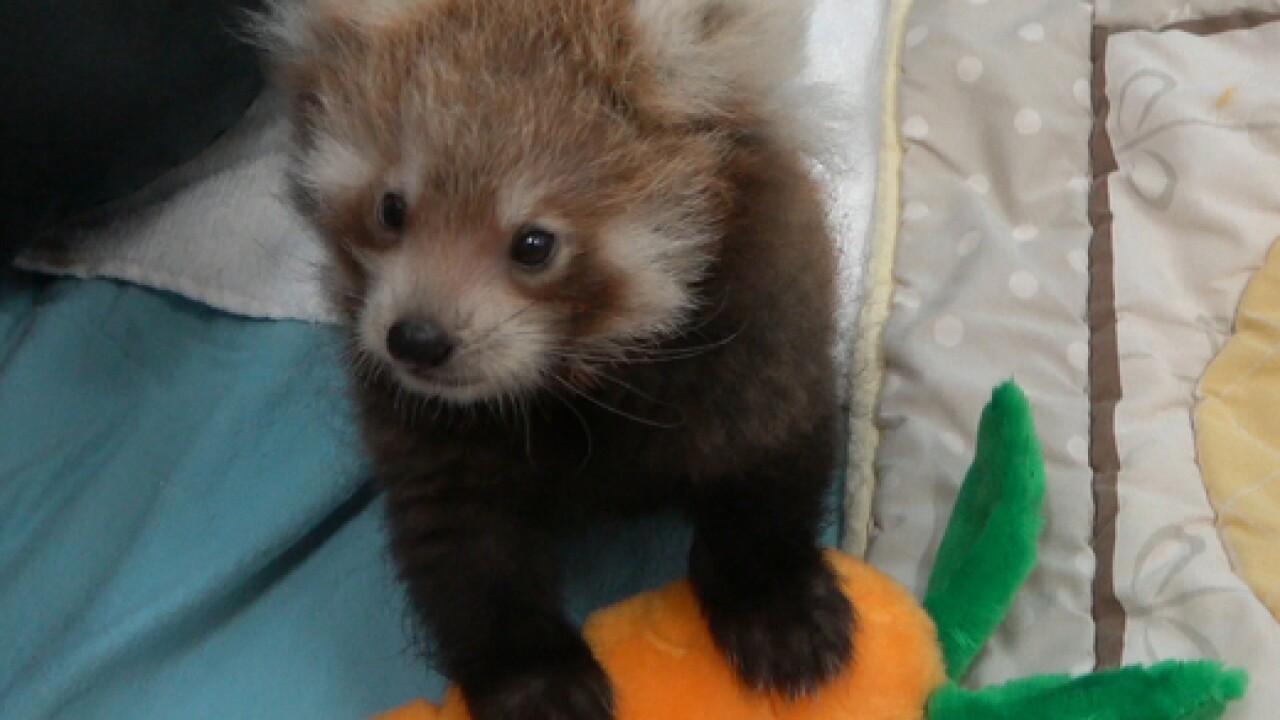 By: Press Release
Posted at 10:50 AM, Sep 26, 2018
Binder Park Zoo announces the news of a baby red panda now on exhibit at the zoo. A male red panda cub named Oolong was born on June 29 to parents Cinnamon and Mowmow. Oolong’s mother Cinnamon died unexpectedly of pneumonia in August requiring the intervention of animal care and veterinarian staff to hand rear the cub. Weighing in at 588 grams or 1.3 pounds, Oolong is about 25% smaller than most red panda cubs of the same age due to a disorder known as congenital hypothyroidism, caused by a lack of active thyroid hormone. Oolong’s condition is improving with treatment and a diet consisting of Esbilac, a milk replacer formula for puppies that has him thriving and gaining weight. While small in size, Oolong is big on personality! He is playful, rambunctious and curious as he ambles about his surroundings, his squeaks and snorts are typical red panda vocalizations as he responds to the keepers. Oolong is currently being housed in the nursery of the vet hospital where guests can see him during his feedings and periods of socialization that generally happen for 30-45 minutes at 10:00am, 1:00pm and 4:00pm. Oolong also has access to a crate where he may choose to nap or hang out during the rest of the time.
With a long time participation in a Species Survival Plan through the Association of Zoos and Aquariums (AZA), Binder Park Zoo has a history of successfully breeding red pandas. These animals are kept behind the scenes in an area not available to the public in order to limit disturbances. A cub born to Cinnamon and Mowmow in June, 2017 named “Bo” was later successfully placed at the Norfolk Zoo.
“While the loss of Oolong’s mother and the need to hand-raise the cub is not the circumstance we would ever hope for,  this is an unusual and rare opportunity for the public to be able see a young red panda cub up close” states Kathryn Sippel, Curator of  Collections at the zoo.
Oolong is not related to Tushar, the ten year old red panda currently on exhibit at the zoo, nor will the two be on exhibit together.
The red panda (Ailurus fulgens), also known as the lesser panda, red bear-cat, or red cat-bear is a mammal native to the eastern Himalayas and southwestern China. It has reddish-brown fur, a long, shaggy tail, and a waddling gait due to its shorter front legs and is roughly the size of a domestic cat, It is arboreal, feeds mainly on bamboo, but also eats eggs, birds, and insects. It is a solitary animal, mainly active from dusk to dawn, and is largely sedentary during the day.
The red panda has been classified as endangered by the IUCN, because its wild population is estimated at less than 10,000 mature individuals and continues to decline due to habitat loss and fragmentation, poaching, and inbreeding depression.
The public is invited to visit Oolong at the nursery of the vet hospital now through October 7 when the zoo will close for the season.  Guests are encouraged to check at the front gate about possible changes to feeding times.
“It’s well worth a visit to the zoo to see Oolong  –  babies grow fast and red pandas are one of the most popular animals with zoo patrons, says Leslie Walsh, Marketing Manager. “The chance to see this tiny cub is sure to be thrill with an enormous “cuteness factor!”
Binder Park Zoo is open Mon-Fri. 9-6, Sat. 9-6 and Sun. 11-6 through October 7. For more information, visit www.binderparkzoo.org [binderparkzoo.org] and follow us on Facebook.
Press Release