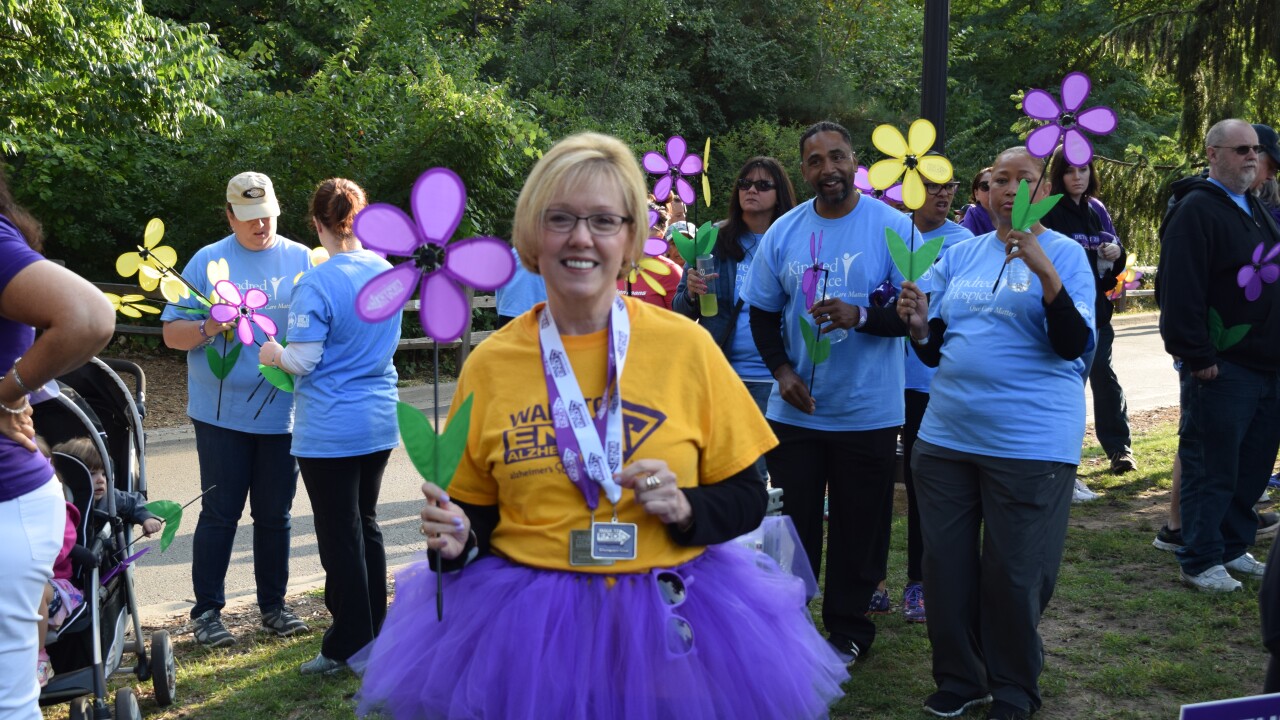 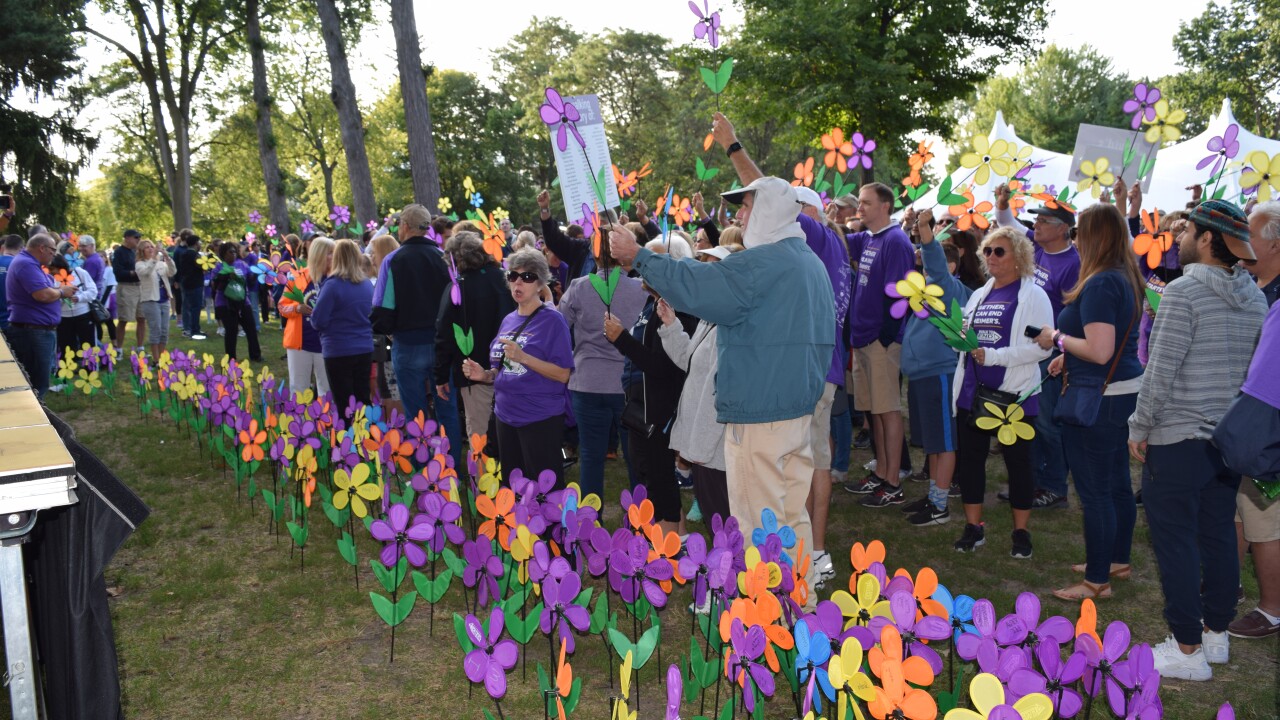 LANSING, Mich. — Julie Duesing was introduced to the disease of Alzheimer's while working for an at-home caregiving company in Lansing. While first starting out in her career, she was not extremely familiar with Alzheimer’s disease. In order to better serve her patients, she quickly educated herself on the realities of the disease. Through this education, she not only was capable of learning a great deal about how to care for Alzheimer’s patients, but also about the vast prevalence among seniors and how it robs people of so much more than just memory.

Julie worked in the private home care profession for nearly five years and retired nearly four years ago. Very soon after she retired, she began to notice some warning signs within her own mother. One of the first signs was when they had attended one of her mother’s friend’s 90th birthday parties, and her mother had refused to thank the family for inviting her to the party. Julie had explained that her mother had raised her in a way where it was extremely important to thank others for their kindness. In that moment, Julie realized that something was really “off” with her mother.

Julie’s mother was an amazing woman. She was a seamstress, and she made all of her family’s clothes. She taught deaf children and mentally challenged adults. In her free time, she loved gardening, quilting, and repurposing items for new uses. This came from her love of treasure and bargain hunting, as she loved to attend flea markets and visit antique stores. Julie described her mother as incredibly resourceful, smart, creative, and adventurous - recalling the fact that her mother and father built their own home and did all of the wiring in the house, despite having no experience with doing so previously.

From Julie’s background and education related to the field of Alzheimer’s, she could see the warning signs early-on, but it took almost a year to convince her sisters that what they were seeing was actually Alzheimer’s. Coming to a full realization of a loved one having a currently incurable disease can be extremely difficult. It is very common for family members to experience denial and Julie’s sisters had a tough time accepting that their mother could have Alzheimer's. After the realization came, Julie and her sisters began caretaking for their mother. Caregiving was difficult as Julie and her sisters all lived far from their mother.

As the disease progressed, Julie’s mother experienced impatience, paranoia and a lack of trust in others. She also lost all of her “filters” so taking her out could be very difficult. Essentially, Alzheimer's disease took Julie’s incredibly thoughtful, loving, and adventurous mother and transformed her into a very different person.

One of the most helpful ways for Julie to emotionally deal with the progression of the disease was to reach out to others going through similar struggles. One of the biggest pieces of advice Julie gives to those with loved ones also going through the disease is to get help from others, either friends, family, or

support groups, such as the Alzheimer’s Association. She also strongly urges people to educate themselves about the disease, and become informed about what the progression will entail, how to see early warning signs, and how to be the best caregiver one can be.

Towards the end of her mother’s life, she quit eating, which was an extremely sad and heart-wrenching part of the disease. Julie describes it as being incredibly hard and painful for everyone involved. She passed away in March of this year, which makes this year’s Walk to End Alzheimer's especially meaningful to Julie. This year, Julie will be no longer walking in honor of her mother, but now in memory of her.

Julie has been walking in the Alzheimer’s Association’s Walk to End Alzheimer’s for 14 years. She originally began walking as a part of her job by heading the business team for her workplace, as well as joining the walk committee. She helped to fundraise in her workplace by doing events, such as forget-me-not flower sales and a hot dog fundraiser, to help raise awareness and support among the caregivers. Julie also started her own personal walk team to also help raise funds for the organization, and she also supports the local Foot Notes of the Jackson Symphony Guild team. One important event to help raise funds for Walk and the Alzheimer’s Association that the Foot Notes put on is that of a donation-based movie night that is free of charge to the community. It will be taking place this September at the Michigan Theater in Jackson.

One of the most important reasons Julie is becoming such an advocate for Alzheimer’s disease is because of the stigma surrounding diseases that have to do with mental or cognitive health. As a 25-year cancer survivor, she feels pride in sharing her story with others. Julie wants people to be able to talk about all mental or cognitive health with comfort so folks can get the education and support they need.

Walk to End Alzheimer’s is the world’s largest event to raise money for the purpose of advancing research of the disease, providing care and support for those affected, and promoting brain health to reduce the risk of dementia. Every dollar raised during the walks works to benefit those affected by Alzheimer’s in the community. The Walks have contributed to more than $455 million invested in nearly 3,000 scientific proposals. They also contribute to local programs and services through support groups, education programs, and a 24-hour helpline (1-800-272-3900).

Sue Prynn is in her first year as Walk Coordinator for the Washtenaw walk. She originally got involved in Walk as a Girl Scout leader, as her troop had helped with the Chelsea and Brighton walks. Through this, she had realized the lack of knowledge and awareness out there regarding Alzheimer’s. She said she had learned at an early age to stop and smell the roses; working to cherish everyday memories. As the disease takes away that ability, she has become extremely passionate about helping the cause to find a cure. To do so, Sue made it her goal to increase awareness of both the walk and the disease itself. She realized the devastating progression of the disease but has witnessed the hope that Walk provides. Not only does it bring awareness to the health crisis that Alzheimer’s is, but it helps to raise support, funds, and hope around finding a cure. Therefore, Walk to End Alzheimer’s is much more than just a fundraising event - but rather it is a support group, a source of hope with a devastating topic, a place to honor one’s loved ones, and so much more.

Jackson’s Walk to End Alzheimer’s will be taking place on Friday, September 20th at Horace Blackman Park in Jackson. Registration begins at 5:00 pm and the opening ceremony takes place at 6:15 pm. Walkers have their choice of participating in a 2-mile or 1-mile walk starting at 6:30 pm. Registration for Walk and more information can be completed on the Alzheimer’s Association’s website (alz.org/walk).

One key way this event is capable of happening is through volunteers. If you are interested in volunteering, visit the volunteer page on the Alzheimer’s Association's website.

For more information on the Alzheimer’s Association, visit their website at alz.org or call the 24/7 helpline at 800.272.3900