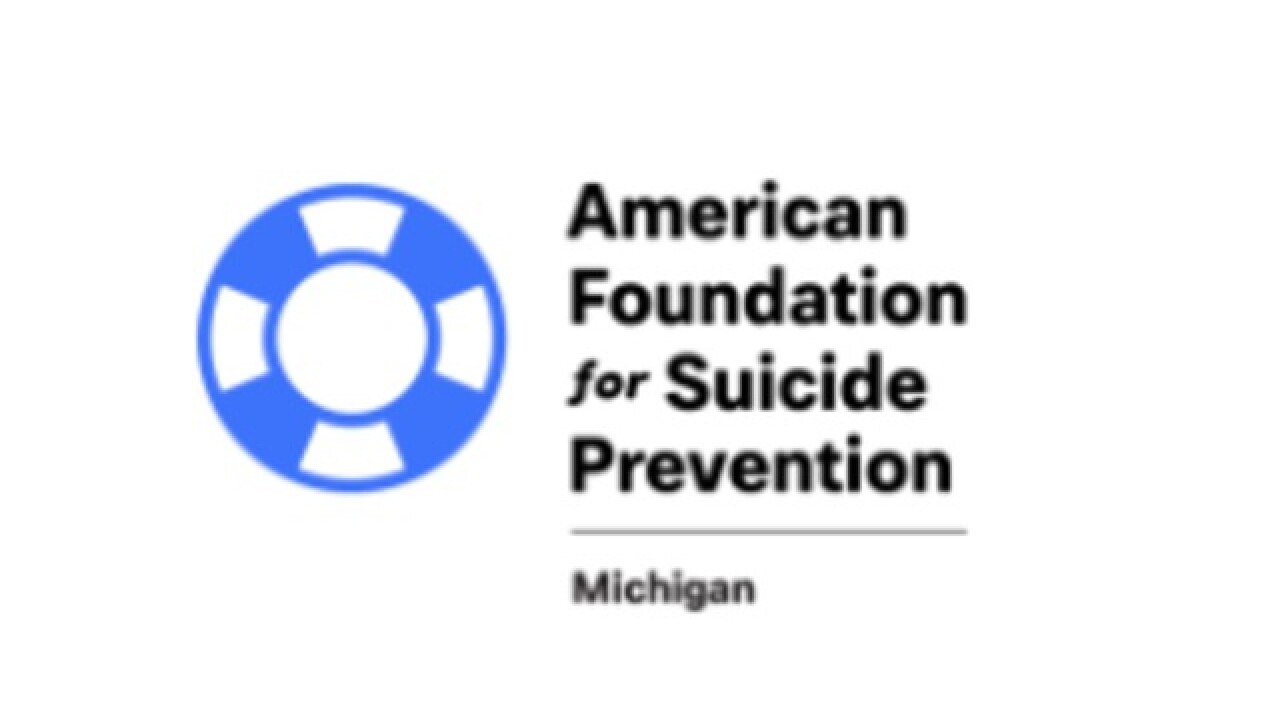 It’s responsible for 123 deaths per day, and yet suicide is often only discussed in hushed tones. It's the tenth leading cause of death in the United States, but suicide is preventable. Volunteers from throughout the Capital Area are expected to join the quarter of a million people who are walking in towns across the United States to draw attention to the fight for suicide prevention.

The annual Lansing/Capital Area Out of the Darkness Community Walk hosted by the AFSP Michigan Chapter at 9:30am at Hawk Island Park. This fundraising walk supports the American Foundation for Suicide Prevention’s local and national education and advocacy programs and its bold goal to reduce  the  annual rate  of suicide  20 percent by 2025.

“Suicide is a devasting issue that effects one in five American families. We lose nearly 1,400 Michiganders to  suicide  each  year. We  walk  to  raise  awareness  about  this  important  health  issue.  We  hope  that  by walking we save lives and bring hope to those affected by suicide,” said Corbin J. Standley, Board Member for the Michigan Chapter of the American Foundation for Suicide Prevention.

The Lansing/Capital Area Out of the Darkness Walk is one of more than 550 Out of the Darkness Walks being held nationwide  this year. The walks  are  expected to unite more than 300,000 walkers  and raise millions for suicide prevention efforts. With this walk last year, the Lansing AFSP Committee raised over $80,000. This year the event planners hope to reach $100,000.

Among  others, the Lansing/Capital  Area Out  of  the  Darkness  Walk  will recognize  the  efforts  of State Senator Curtis Hertel, Jr. (D-23) in promoting mental health and suicide prevention legislation, as well as our active duty military, veterans, and first responders. “These walks are about turning hope into action,” said AFSP  CEO  Robert  Gebbia. “Suicide is a serious problem, but it’s a problem we can solve. The research has shown us how to fight suicide, and if we keep up the fight the science is only going to get better, our culture will get smarter about mental health, and we’ll be able to save more people from dying from depression and other mental health conditions.”

Local  sponsors  for the  Lansing/Capital  Area Out  of  the  Darkness  Community  Walk  include Community Mental Health, Meijer, Sparrow, Flagstar Bank, and McLaren.

The event is free to attend, but donations are encouraged and walkers who raise $150 by walk day will receive a free t-shirt.

Attendees can register and donate at afsp.org/Lansing. The American Foundation for  Suicide Prevention is  dedicated to saving lives  and bringing hope to those affected  by  suicide.

AFSP creates a culture that’s smart about mental health through education and community programs, develops suicide prevention through research and advocacy, and provides support for those affected by suicide.

Led by CEO Robert Gebbia and headquartered in New York, and with a public policy  office  in  Washington,  D.C.,  AFSP  has local  chapters in  all  50  states  with  programs  and  events nationwide.  Learn  more  about  AFSP  in  its  latest Annual  Report,  and  join  the  conversation  on  suicide prevention by following AFSP on Facebook, Twitter, Instagram, and YouTube.