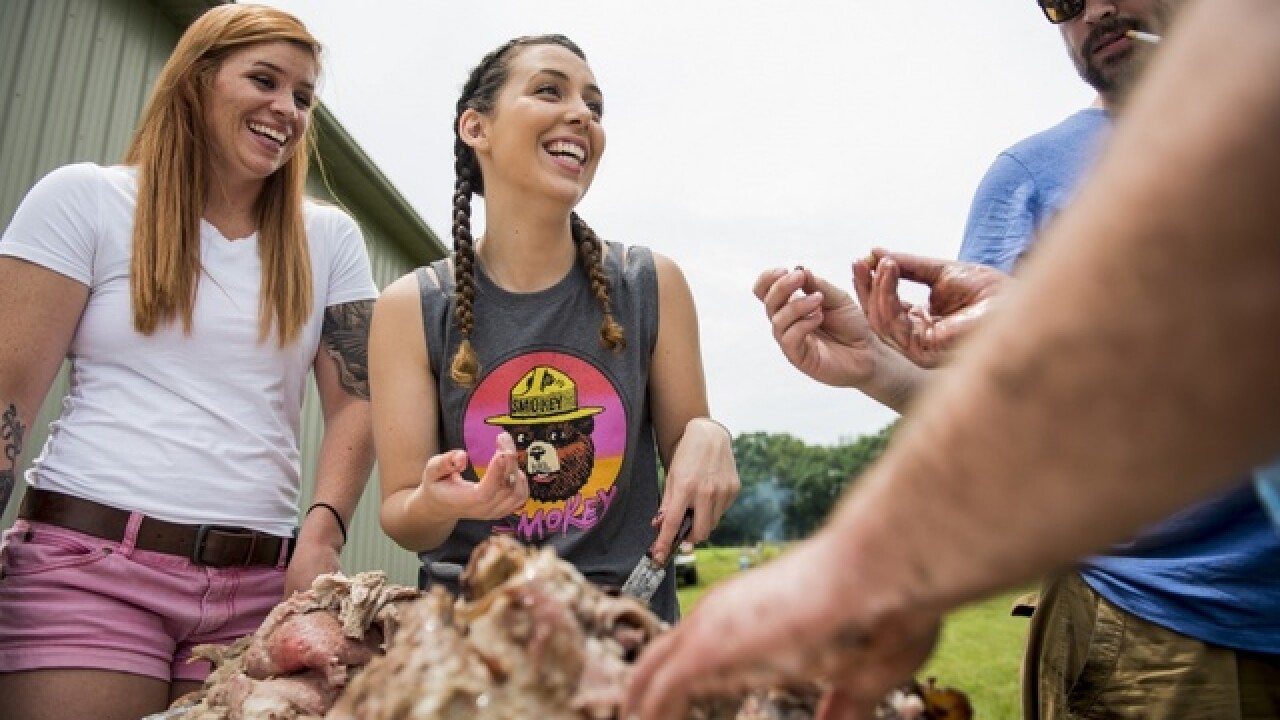 Press Release
<p>Photo By <a href="https://www.dvidshub.net/portfolio/1029381">Master Sgt. Michel Sauret</a> | Former U.S. Army Reserve Soldiers from the 303rd Military Police Company, of Jackson, Michigan, and their friends joke around while eating a roasted pig during their annual "Happy Alive Day" picnic in Stockbridge, Michigan, June 16, 2018. The Soldiers were military police who survived a Taliban attack on their base while deployed to Kandahar, Afghanistan, June 19, 2012.</p>

When the explosion happened, Spc. Scott Stanley thought it was just the generator backfiring. But as AK-47 gunfire cut through the small compound, Stanley realized they were under attack.

Men dressed in Afghan police uniforms threw grenades and shot up the tents around them. In reality, the invaders were Taliban members in disguise. This was 2012, the worst year for Green on Blue attacks in Afghanistan. According to a report by Real Clear Defense, those attacks resulted in 61 dead and 81 wounded in a 12-month span. There were 44 Green on Blue incidents that year, and this was just one of them.

“My tower got hit … I think it was around 40 to 50 rounds that whizzed by. On top of the tower looking like a piece of Swiss cheese – there were holes everywhere – sandbags to the right of me were exploding,” Stanley recalled years later.

“I couldn’t hear for a couple of days because I shot 70-some rounds in – I don’t know – a five-by-five enclosure,” he said.

Stanley was put in that tower as punishment. He had smarted off to a lieutenant colonel the day earlier who was in charge of their mission. The base was called Provincial Reserve – all the Soldiers called it PR – located in “Old Kandahar” with its back pressed against a steep mountainside. PR was essentially a training base for the Afghan police. Stanley’s platoon of U.S. military police was deployed to train the Afghan forces to regain security in their own country.

He killed two of the four attackers from his tower that morning, but as the gunfire settled, a terrible thought came to his mind.

“I thought I was the last one alive,” he said.

The attack is reported to have lasted only 14 minutes, but in that span of time the Taliban managed to kill two men – a contractor named Tom Boyle and an interpreter – and wounded 12 Soldiers from the 303rd Military Police Company, a U.S. Army Reserve unit from Jackson, Michigan. Nine of those Soldiers were evacuated by helicopter, first to Kandahar, then Germany, and eventually back to the U.S.

Instead of looking back on that day with dread, the Soldiers of the 303rd Military Police Company gather each year for a picnic to celebrate life. The company is a U.S. Army Reserve Unit headquartered in Jackson, Michigan. The surviving Soldiers call the event Happy Alive Day, hosted around June 19 each summer, the attack’s anniversary date.

“That’s the day that all our lives changed. What this day means to me is a gathering of comrades,” said Zack Leys, who responded to the scene as a member of a quick reaction force. His brother, Will, was inside the base, and for what felt like hours, he didn’t know whether his brother was dead or alive.

Mark Bowdish – the unit’ medic who now sports a lumberjack beard – hosts the anniversary picnic at his farm each year in Michigan. The celebration started out as a small gathering, but over time the picnic grew to include more friends, family and members of the community who have supported them in their recovery.

This year, Bowdish and a few Soldiers built a smoke pit out of cinderblocks to roast a 180-pound pig on a spit that he welded together from scratch. With the help of a friend, Eric Wheeler, they roasted the hog overnight, stuffed with handfuls of garlic, apples, onions, peppers and whole Italian sausage links.

When the hog is brought out onto a table and carved, the skin is brown and crispy. Wheeler, the roast-master, cuts the stitches that held the belly shut. The vegetables and Italian sausage spill out. Too eager to wait, a few friends start picking at the stuffing and pull tender pieces of pork with their fingers.

“So that’s how sausage is made,” someone jokes as Wheeler chops the links on the table that had slow-cooked inside the pig’s belly overnight.

Bowdish, the party’s host, was shot in his stomach, the groin and both legs as soon as he exited one of the tents. He wears a tattoo on his left shin of a bullet wound that shows the exact spots where one of the rounds entered his leg.

“Time slows down,” he said while recalling that day. “I don’t know how to explain it. I watched every bullet hit my body.”

Tyler Rosas was shot through both legs by one bullet. His wife was seven months pregnant with a girl at the time. The bullet took him down to his knees. He didn’t even realize he was hit until someone had already put a tourniquet on one leg and was working on the other. The first thing that came to his mind was not being able to share a daddy-daughter dance with his little girl.

Keith Blake still has shrapnel pieces embedded in his back. Ryan Barger has to wear sunglasses outdoors because his brain injury makes his eyesight sensitive to light. After the rescue, Barger called his girlfriend Andi – they’re now married – to reassure her that he was okay. But afterward she got a call telling her that Barger had suffered Traumatic Brain Injury.

As bad as the experience was for the Soldiers, the family members had to uproot their lives so they could be with their sons, fiancés and husbands in Maryland and Virginia as they recovered at different Army hospitals.

In spite of the long months of recovery ahead, many of them were thankful because they never thought they’d make it back to the U.S. The first grenade had destroyed the power generator so they couldn’t radio for help.

He lost his left eye when a grenade exploded outside of a tent as he searched for locator beacons to signal for help.

“There are four sections of my brain that were damaged severely by a concussive wave, and a piece of shrapnel about the size of a dime that went straight through,” he said.

He now wears a prosthetic eye that he likes to use as a practical joke on friends and strangers he meets for the first time. One of his signature moves is dropping the eye in a friend’s beer glass at the bar so that he can have it for free. Only one friend was brave enough to drink the beer after that stunt, and almost swallowed the $1,700 eye by accident.

While cracking jokes one day, a man told him, “Oh, we got a funny guy. I’m going to have to keep my eye on you.” So Weinrick took out his eye, placed it on his shoulder and said, “How about I keep an eye on myself?”

Weinrick’s whip-cracking sense of humor continues at the picnic. He’s the center of gravity for many of the Soldiers and their spouses, among games of darts, corn-hole and hula-hoops.

“Some of the guys and girls that come here, I may see only once a year, but when we get together and we have conversations, it’s like time never passed,” said Leyes.

Each year brings new updates on life. A new pregnancy or marriage or milestone in their kids’ growth.

“It reminds me of what life has to offer, besides for all the bad stuff … We’ve seen what the worst of humanity has, so now let’s focus on the best of what humanity has to offer. That’s what this day represents for us,” said Leyes.

When the Soldiers talk about what helped them through their recovery, they all thank someone else who survived with them that day.

“I don’t know if it’s necessarily the brotherhood of the military, but it’s more the brotherhood of the 303rd, especially second platoon … You only develop that level of trust and confidence in a group by going to war. You can only do that with another man with a rifle behind your back. It’s the only way to gain that trust. You have to. It’s how you live. Without that, you don’t survive,” said Bowdish.

That’s how they survived that day. Each Soldier knew their role. When Bowdish went down, the rest of the Soldiers knew how to bandage wounds and care for their battle buddies. They killed all four invaders in 14 minutes. And even though 12 of those Soldiers received a purple heart, at least they didn’t receive a funeral.

Yet, even as that horrific day ended, surviving the days ahead was just as important, especially through the painful recovery.

They talked each other through the angry days. The dark days. The scary ones. No matter how close they were with their families, nobody could understand or help them process so clearly what they experienced as the other Soldiers who were in Afghanistan with them on that day.

As they gather for roasted pig, beer and stories, Weinrick and other Soldiers from the 303rd recognize an important perspective.

The attack was a horrific, yes. It changed their lives, yes. But they come together to celebrate life and reclaim hold on the territory the attackers tried to take from them. They take back that day for themselves.

“The attack was (just one) day,” said weinrick. “Just a really bad day. But we made it through. We pulled through. And now we are joined in battle … (On this day) we choose to say, we’re still winning. You didn’t win. You didn’t get us. And we’re still alive.”

Though the years have passed, facing the anniversary of the attack is never easy. Weinrick’s voice becomes coarse with wrath as he recalls that day.

“On June 19th of every year, they get five minutes of my life. I let them take five minutes on that day to control my anger. And I feel the blood boil. And I want to go back and kill every one of them,” said Weinrick.

He closes himself off through those minutes, away from his wife and children, allowing the anger to consume him. But he doesn’t allow a second longer to pass.

“It’s not a place you want to be around when that five minutes happens. It’s very controlled for me. But it’s all I afford them. Every year. That’s all they get … After that five minutes is done, I reset, and I come back to my family … I drink a stiff drink. Smoke a nice cigar. I inhale. And I take in all of this. And this day helps me get through. Because I know my guys are still alive. They’re still taking care of each other,” said Weinrick.