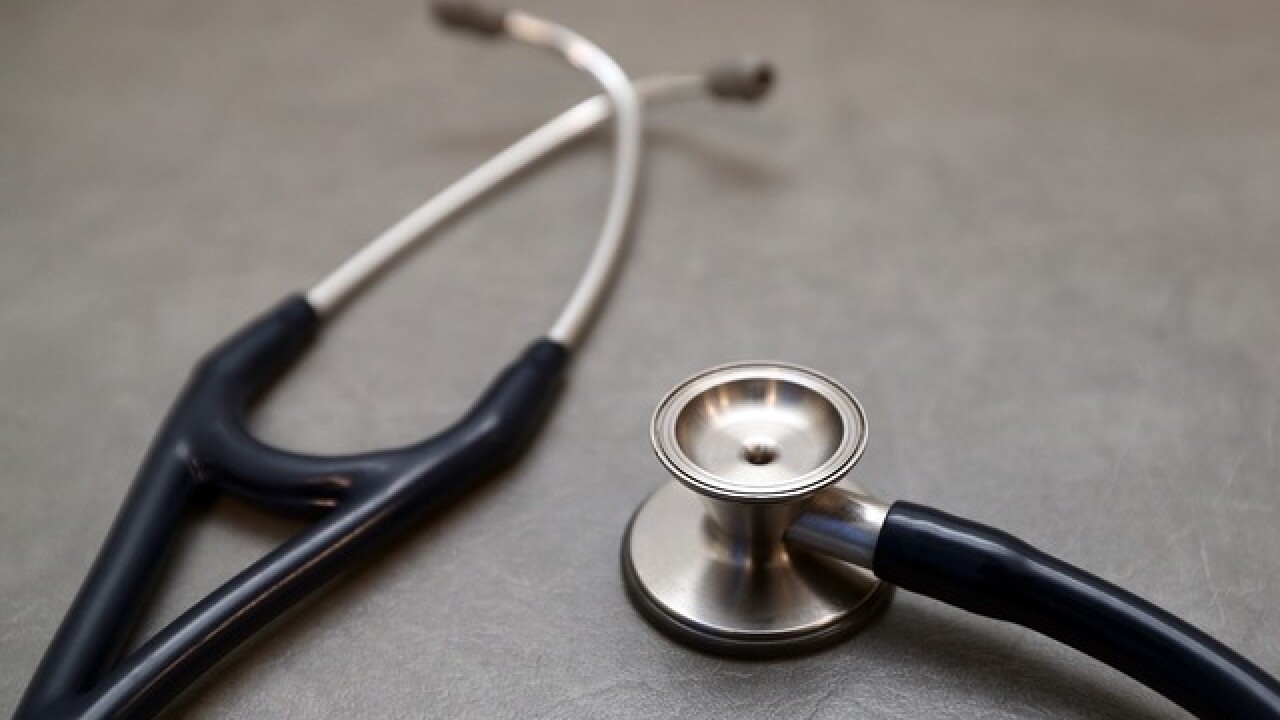 2014 Getty Images
Carl Court
<p>LONDON, ENGLAND - DECEMBER 04: A stethoscope is pictured in a General Practitioners surgery on December 4, 2014 in London, England. Ahead of next years general election, the Chancellor of the Exchequer, George Osborne, has said he will put an extra ?2bn into frontline health services across the UK, ahead of a plan drawn up by NHS bosses calling for an extra ?8bn a year by 2020. In England, everyone would be able to see a GP seven days a week by 2020. (Photo by Carl Court/Getty Images)</p>

By: Press Release
Posted at 11:20 AM, Aug 23, 2018
Michigan Attorney General Bill Schuette announced today that he has charged physician Jonathan Robertson, 43, with 8 counts of criminal sexual conduct in the 3rd degree, related to sexually assaulting female patients in his care. Robertson, who has offices in Marquette and Traverse City, was charged following an investigation for allegedly prescribing narcotics in exchange for sexual favors. CSC-3 is a felony punishable by up to 15 years in prison.
“When a woman visits her doctor, she rightfully has the expectation that she will not be sexually assaulted,” said Schuette. "I encourage anyone with information about this case to contact the Michigan State Police."
Robertson was arraigned before Judge Roger Kangas on August 22, 2018 at 2 P.M. in the Marquette District Court. Robertson was held on a cash surety bond of $250,000 for each count, totaling $2,000,000.
It is believed that two different women were sexually assaulted by Robertson from October 2014 through April 2015. The first victim was seeking help for opioid addiction and the second victim was referred to Robertson for pain management. The only reason the victims had contact with Robertson was in his capacity as a physician.
Robertson allegedly sexually penetrated the women under the guise of medical treatment, but the alleged assaults were often blatant and performed for sexual pleasure.
During victim one’s second visit, it is believed Robertson was alone with her in a locked exam room when he penetrated her vagina with an un-gloved hand and then allegedly forced her to perform oral sex on him in exchange for a prescription for Suboxone, a drug used to treat those in opioid addiction recovery. He is alleged to have told her not to tell anyone about the exchange. It is presumed that the second assault occurred during her third visit when she did not have an appointment but was hoping he would give her medication as he had in the past. He then pulled down his pants and exposed himself and allegedly forced her to perform oral sex on him. He then gave her $200 cash, for her prescription that he requested from a pharmacy.
Victim two sought medical treatment from Robertson for a sore muscle in her hip. During multiple visits to Robertson’s office she was allegedly assaulted in a patient examination room. At her first visit with Robertson she was alone with him in an exam room where he penetrated her vagina with an un-gloved hand and then prescribed her Morphine and Dilaudid. She was seeking medical help for pain management when he presumably assaulted her.
If anyone has information related to Robertson, please call Lieutenant Robin Lynde with the Michigan State Police at 313-418-2731.
A criminal charge is merely an accusation and the defendant in this case is presumed innocent unless proven guilty.
Press Release