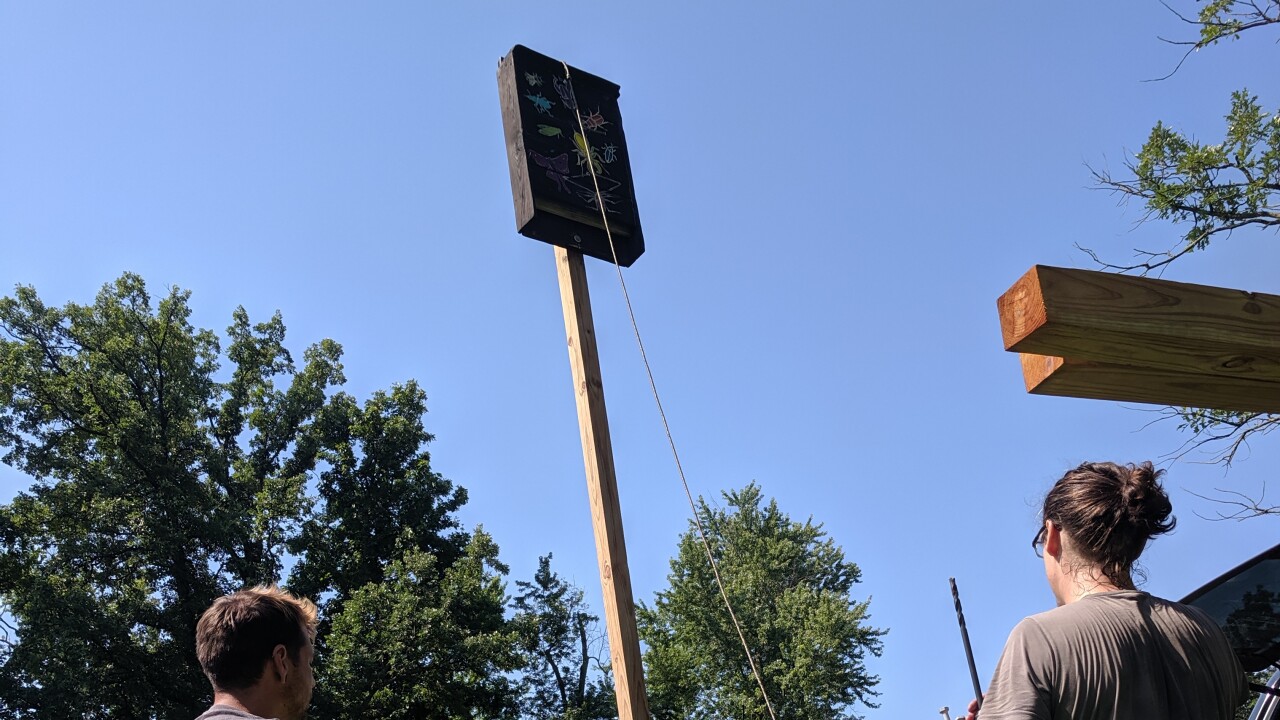 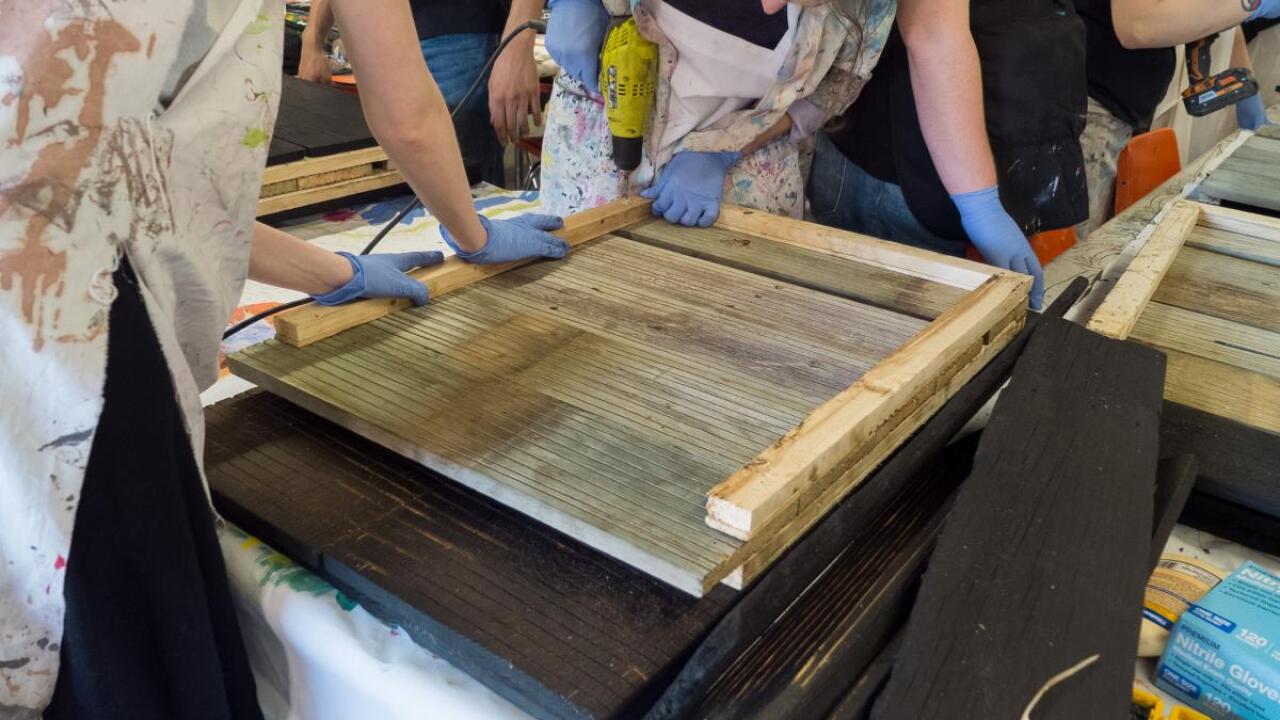 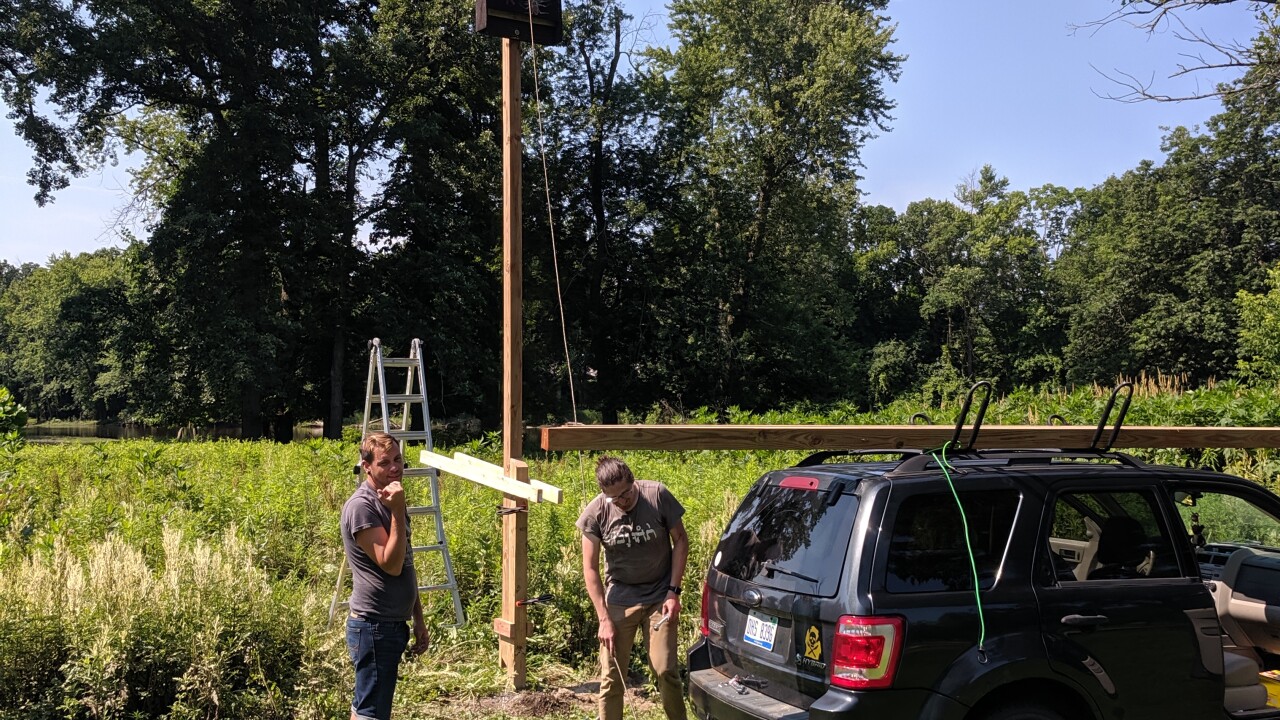 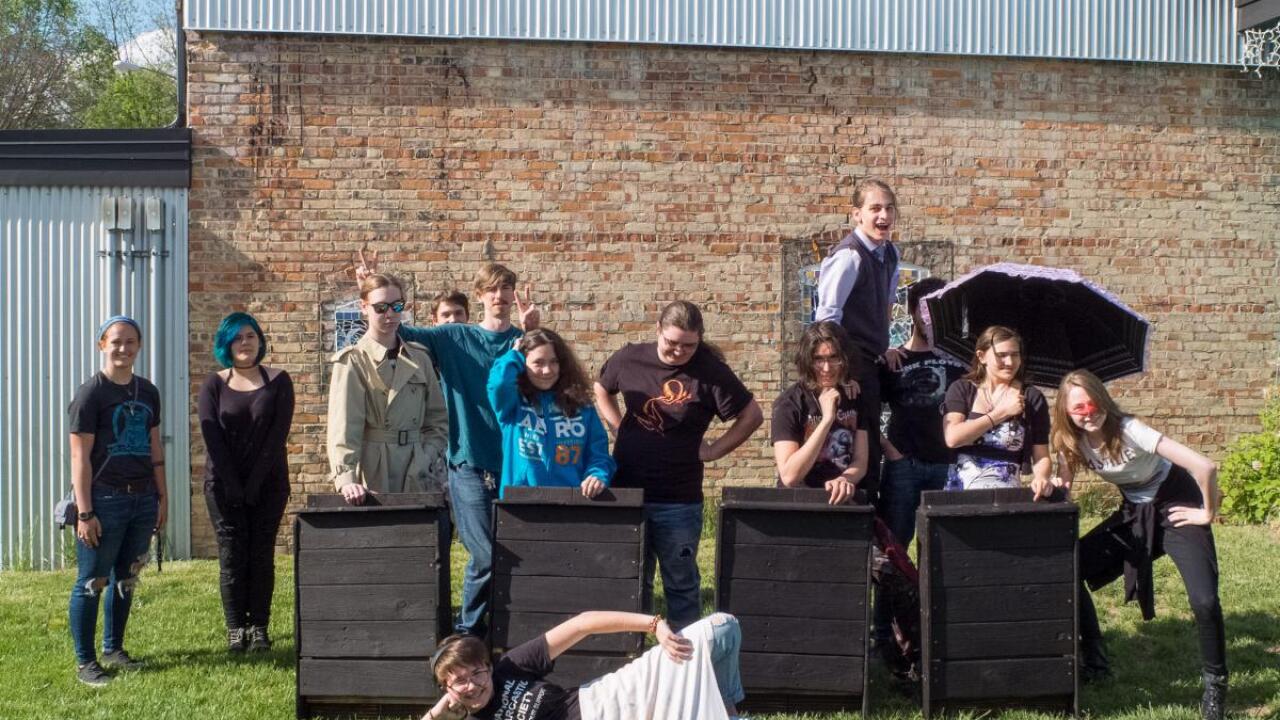 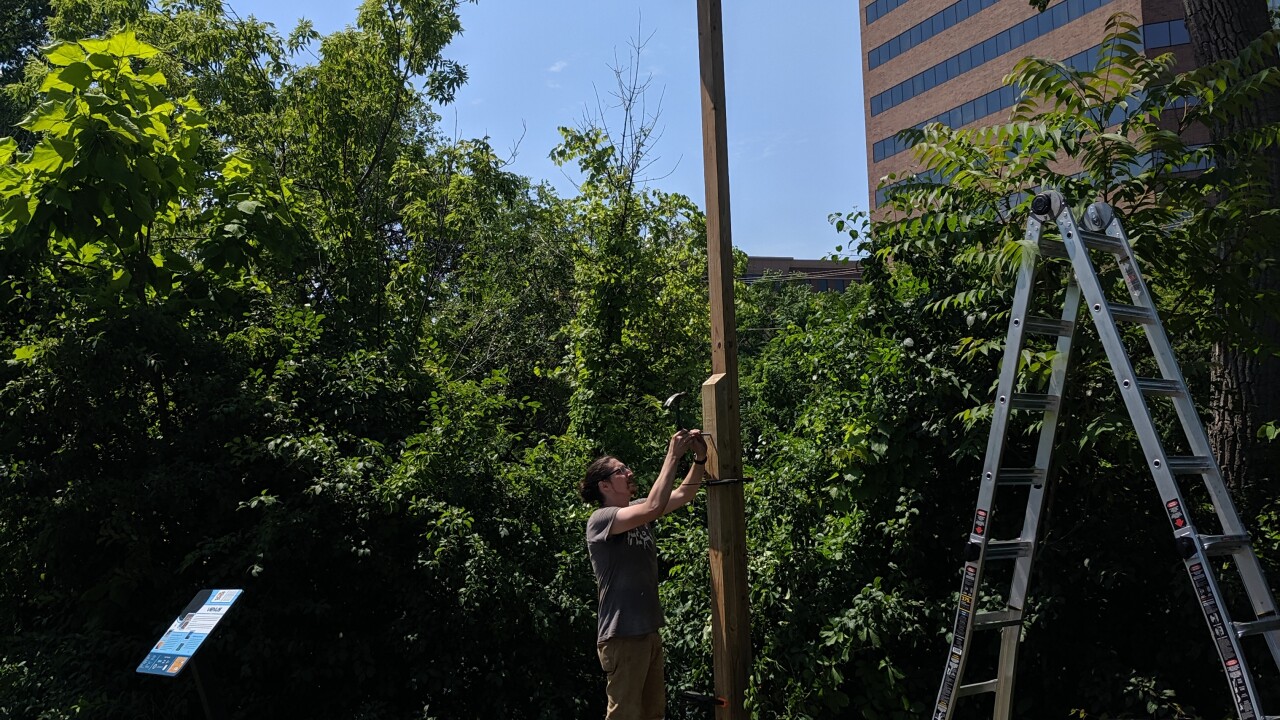 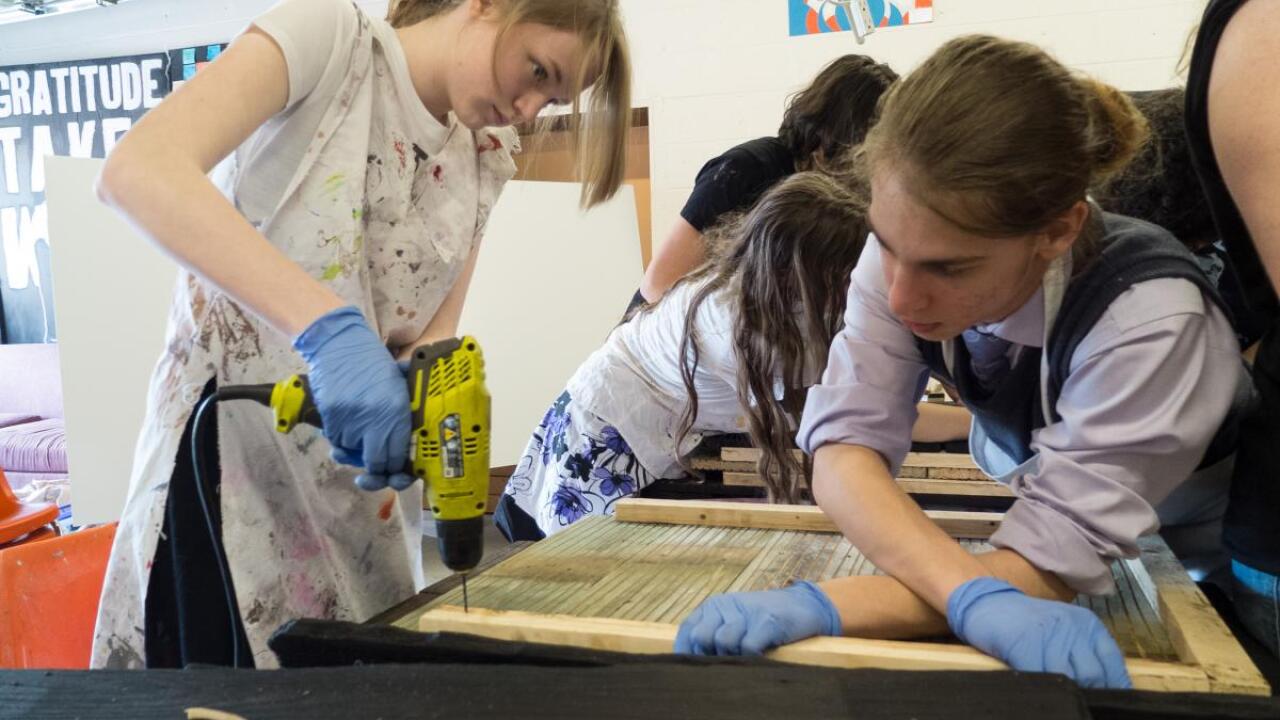 LANSING, Mich. — You may have noticed some new real estate along the Lansing River Trail: Four large bat boxes now rise above various points along the trail route. The bat boxes were assembled and decorated by students at REACH Art Studio and then installed July 2019 by MSU Bat Association volunteers.

Once the team obtained a city permit for the project, they acquired funding for supplies and materials from the MSU Federal Credit Union and the NSF-BEACON program (a science and technology center that is headquartered at MSU).

Next, a workshop focusing on bat box building and design was developed for teen students at REACH. During the first stage of the workshop, students assembled four bat boxes.

This work was led by Peter Fowler, Community Outreach Chair for MSU’s Bat Association. Fowler adopts a centuries-old Japanese technique (Shou Sugi Ban) to repurpose cedar fencing for the bat boxes. Shou Sugi Ban involves burning the surface of the wood, cooling it, and then applying linseed oil to make the wood weather-resistant for decades.

In the second stage of the bat box building workshop, teen artists were guided by REACH instructor Joy Baldwin to develop unique, mixed-media decorations for each of the four prepared bat boxes. Students were invited to build exterior designs of their own choosing — they needed only conform to certain constraints (e.g. prevailing color) in order to remain attractive to bats.

According to Fowler, a fourth-year student in MSU’s College of Veterinary Medicine, these attractive bat boxes can now provide bats with a safe, permanent home in which to raise their young — a single box can hold over four hundred adult bats. In addition to providing habitat for bats, the boxes can also cultivate public awareness about Michigan’s native bats.

These helpful organisms are currently facing numerous challenges including White Nose Syndrome — an infectious fungus that is decimating bat populations worldwide. White Nose Syndrome affects many bats in the Midwest, and has been particularly harmful to the unique bat community of Michigan’s Upper Peninsula.

When most people think about bats, they think of another disease — “rabies.”

“While rabies-positive bats have been found in the Mid-Michigan area, rabies is relatively rare among big brown bats, Michigan’s most common bat,” Fowler said, “With only half a percent of wild big brown bats carrying the disease.”

“Even though the percentage of bats carrying rabies is small, the rabies risk they present should be taken very seriously. As with any wild animal, bats should never be handled under any circumstances,” Fowler said. “Rabies is one hundred percent fatal if contracted. If anyone has had contact with a bat, it’s recommended to submit the bat to MDHHS for rabies testing. If the bat cannot be located, a post-phylactic rabies vaccine must be administered which can be very expensive. By educating people about the importance of bats to the local ecosystem, we can also open a dialogue about public health and what to do if you encounter a bat in your home. This can ultimately reduce the number of post exposure vaccines that need to be administered.”

According to Bat Association of MSU Founder Ryan Mosley, bats in natural settings provide important and diverse benefits to humans.

“Bats are a crucial and often ignored component of our local ecosystems,” Mosley said. “For example, a nursing female bat can consume her own body weight in insects every night, and consumption of insects by bats reduces the number of disease vectors and agricultural pests in the local environment.”

Research has shown that bats save U.S. agriculture a minimum of 3.7 billion dollars annually in reduced pesticide use, Mosely said.

“Bats are also amazing and diverse creatures, comprising over twelve-hundred different species, from the fastest mammal on earth to the smallest mammal on earth,” she said. “They are essential for seed dispersal and pollination of night flowers like banana and agave as well.”

Since registering as a student organization in 2016, the Bat Association of MSU has been educating the public about the importance of bats by holding free bat house building workshops, seminars about Michigan’s bats by leading experts and started a program with the help of volunteers to assist people who have bats in their homes in and around Lansing.

“One of the best ways to keep them out of your attic, is to give them a home of their own,” Fowler said.

You can find out more about their work and upcoming events including a series of educational Bat Walks by following them on facebook at www.facebook.com/batsmsu .