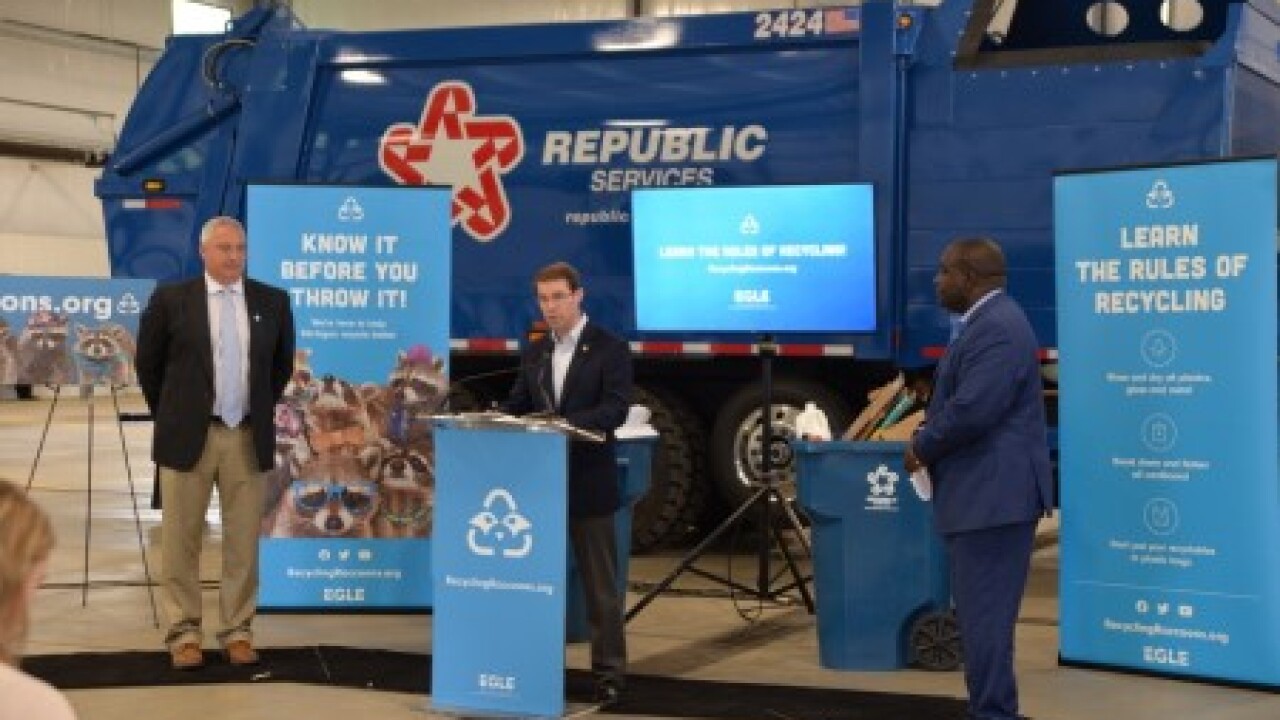 LANSING, Mich. — There's a whole lotta' love in Lansing from lawmakers on both sides of the aisle for Michigan’s Recycling Raccoons.

Republicans and Democrats alike are expressing overwhelming approval of the launch of "Know It Before You Throw It" -- the Department of Environment, Great Lakes, and Energy's first-ever statewide recycling education campaign, highlighted by the debut of the Recycling Raccoon Squad as the state's messaging ambassadors.

And legislators are united in their support of EGLE's goals for the campaign, which aims to better inform Michiganders on what they can -- and cannot -- recycle as well as promote EGLE's push to double Michigan's recycling rate to 30% by 2025 and ultimately reach 45% annually.

"I am happy the Know It Before You Throw It campaign came to my district, and I applaud the work they (EGLE) are doing across the state," state Sen. Wayne Schmidt, R-Traverse City, said after a July 29 news conference at the American Waste materials recycling facility in Traverse City.

"This is a tremendous bipartisan effort with nothing but the state's best interest in mind," Schmidt said.

State Sen. Winnie Brinks, D-Grand Rapids, and state Rep. Rachel Hood, D-Grand Rapids, spoke at a similar event Oct. 21 announcing the West Michigan launch of Know It Before You Throw It at the Kent County Department of Public Works Recycling and Education Center.

"(This) campaign is developing the consistency in recycling messaging that we need to successfully reduce the likelihood of recycling the wrong items," said Hood, a former director of the West Michigan Environmental Action Council.

"An aggressive, multipronged strategy is essential to achieve a statewide recycling rate of 30%, and my legislative colleagues and I are confident EGLE's campaign is moving Michigan in the right direction," Brinks said.

In an overwhelmingly bipartisan move, the Michigan Legislature boosted funding for EGLE's recycling projects in 2019, allocating $15 million to the cause – up from the $2 million it had earmarked in 2018. The additional funds are being used to support development of recycling markets, increase access to recycling opportunities and support planning efforts to grow recycling at the local level.

The Know It Before You Throw It campaign is a direct result of that bipartisan cooperation and has given Michigan legislators the ability to speak directly to their constituents on the increasing importance of recycling properly.

"I think it's essential that we recycle throughout Michigan," said state Rep. Sue Allor, R-Alpena, at an Aug. 19 press event. "That's the main way we can help to protect our environment, and that's something that we, as citizens, need to focus on."

Some of the messages shared in the Know It Before You Throw It campaign include the fact that recycling in Michigan generates nearly 36,000 jobs and an annual payroll of $2.6 billion.

If Michigan achieves its 2025 goal to recycle 30% of its trash, it would produce 13,000 new jobs statewide and another $300 million in annual economic impact.

At a Sept. 16 press event in Kalamazoo, state Sen. Sean McCann, D-Kalamazoo, spoke of how improved recycling habits could deliver significant benefits to the local economy.

"Changes within the recycling industry are resulting in higher costs for some local governments that fail to meet new industrywide cleanliness standards for recyclable materials," McCann said. "That's why it's important for all of us to help spread the Know It Before You Throw It message and join Kalamazoo's commitment to increasing its recycling numbers."

And state Sen. Curt VanderWall, R-Ludington, during the Traverse City news conference put the new campaign in context of groundwork that has been laid for years.

"What's really exciting about the Know It Before You Throw It campaign is that we've spent the past decade or more emphasizing the need to put more resources into recycling education and supporting local communities' programs," VanderWall said. "Michigan is now putting words into action."