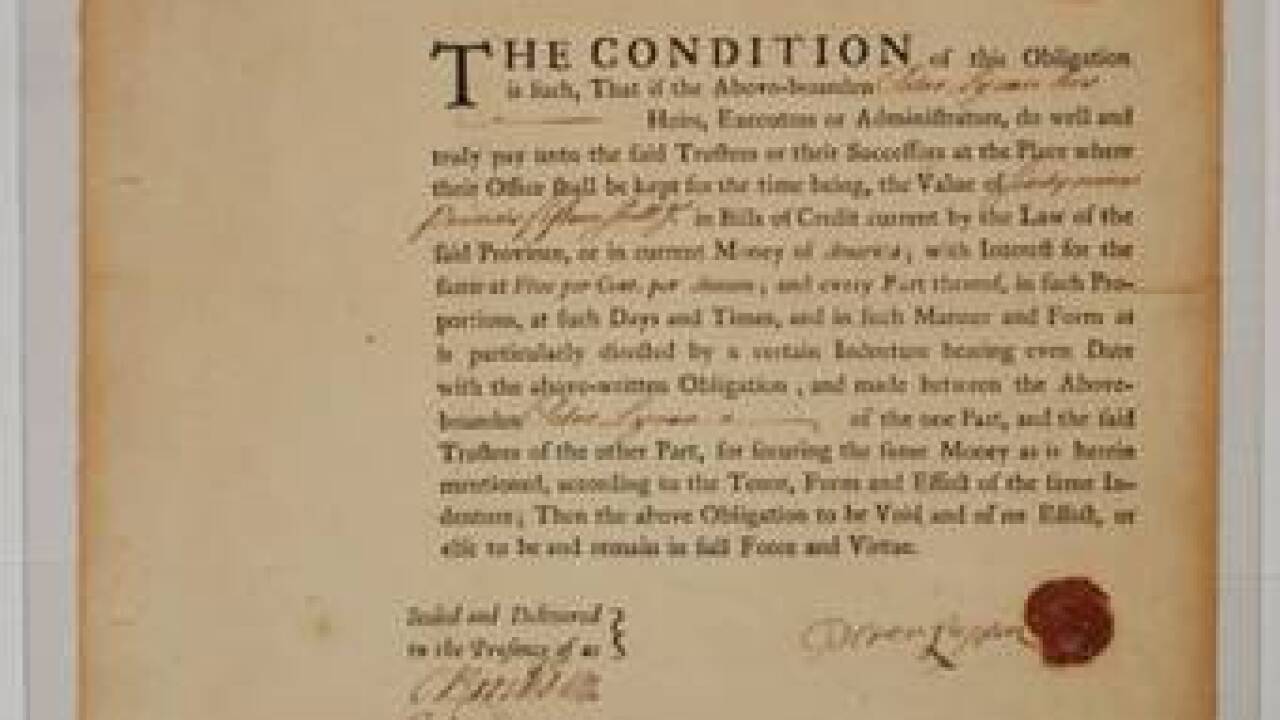 LANSING, Mich. — While attending the International Paper Money Show in Kansas City, Missouri late last week, the staff of Liberty Coin Service purchased an exceedingly rare 1736 mortgage document for land in Mooreland, Pennsylvania Province that was printed by Benjamin Franklin. Before it finds a new owner, visitors to the Liberty’s store in the Frandor Shopping Center will be able to personally inspect this piece of American history.

Said LCS CEO and owner Tom Coulson, “This document has an amazing pedigree. At one time it was on display in the Franklin Museum in Philadelphia. There is a notation on the back of the mortgage that the museum either added it to its holdings or de-accessed it in the year 1880. It later was acquired by the legendary coin collector Eric P. Newman. The previous owner purchased this document from the auction of Newman’s extensive holdings. He had done research in auction history to learn that the item was much scarcer than generally thought. With his specialized research he was able to acquire the item for well below his maximum bid. Then, when he brought the item to the Kansas City convention, early on he met LCS Communications Officer Patrick A. Heller, a decades-long friend of his, and negotiated a reasonable price to sell the attractive 283-year old piece of American history.”

Benjamin Franklin entered the printing business in Philadelphia working for Samuel Keimer in 1723 and from 1727-8, one of two printing companies in the city. In May 1728, Franklin and Hugh Meredith quit working for Keimer to establish their own printing business. This partnership dissolved in 1730, perhaps due to Meredith’s addictions to alcohol and gambling. From 1730 to 1748, Franklin was the sole owner of his printing company. He then took in David Hall as his junior partner from 1748 to 1766.

The General Land Office of the Province of Pennsylvania was established early in the colony’s settlement to facilitate purchases of land. Research indicates that this Office typically issued a few hundred mortgages each year from 1729 through the 1730s. In 1730, Franklin won his first government contract to print the blank mortgage documents that the General Loan Office used in the 1730s. He later printed the paper money issues for the Province of Pennsylvania in 1731 and 1739 and was involved with later monetary issues.

This particular mortgage was issued September 9, 1736 to Peter Lycan of Mooreland, Pennsylvania in the amount of 139 pounds 10 shillings in British currency. The document has survived in exceptional condition for its age, suffering some typical toning and splits where the paper was folded and two tiny pieces along the edge of the paper that separated. The printed lettering is still sharply embossed into the paper and the written information and the wax seal are all bold and intact. The document has been authenticated and certified as Choice Very Fine-30 condition by PCGS Currency. In researching this document, the previous owner checked multiple decades of auction records of the former auction house where he conducted research in historic documents and found that the company had never handled one of these Franklin-printed mortgages His conclusion was that this fiscal document is probably not the only surviving example, but it is likely one of only a handful of survivors.

Frequently-honored Liberty Coin Service, founded in 1971, is Michigan’s largest rare coin and precious metals dealership. Liberty Coins, as it is known locally, has been located in Lansing’s Frandor Shopping Center since 1975. Over its time in business, the company has handled numerous historical documents including those signed by John Hancock, the first seven and several other US presidents, King George III, Napoleon Bonaparte, Albert Einstein, Ransom E. Olds, and other historical figures.