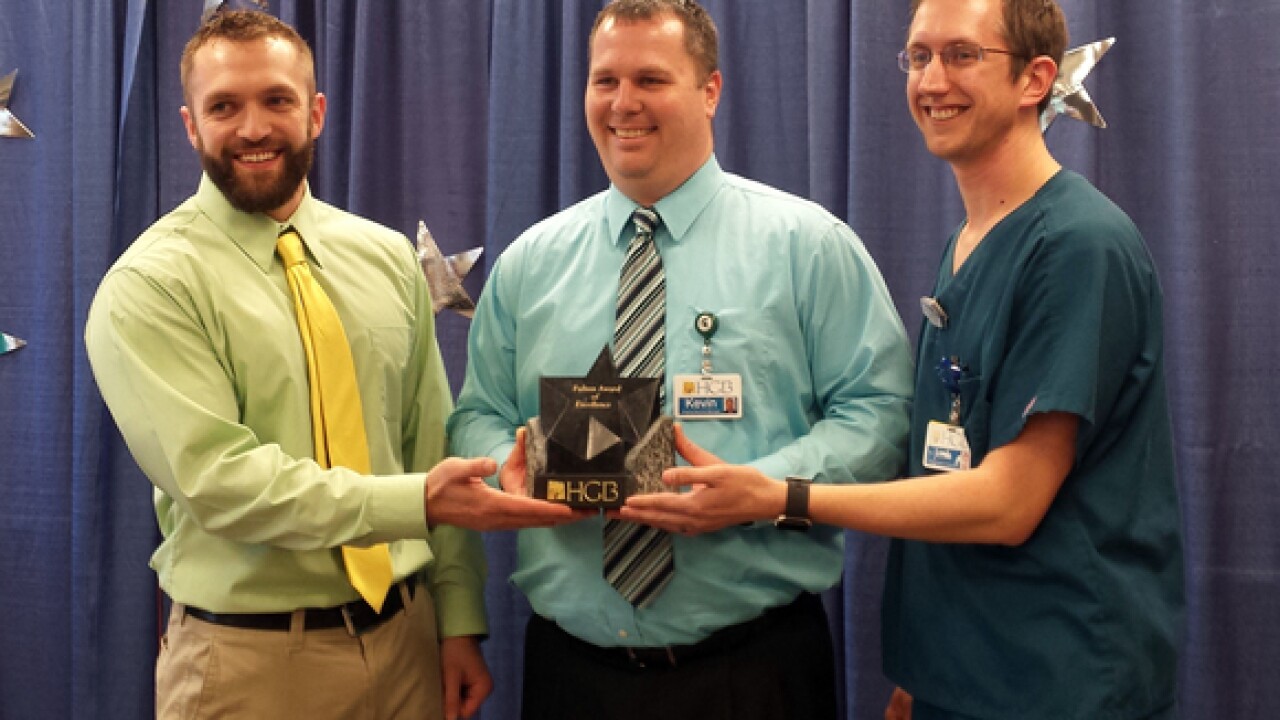 Eller joined HGB in July 2009. He was nominated for the Fulton Award because he consistently goes above the call of duty and demonstrates HGB’s Five Star Service behaviors. His manager wrote, “Josh is eager to help where needed and approached me to cross-train to help the department’s busy times when he has downtime in Nuclear Medicine.” He even offered to help change an elderly patient’s flat tire when they came into the hospital to call a wrecker service. “Josh just wants to help and improve processes for staff and patients.

Berger has been part of the MOVE team at AL!VE since he began working for HGB in 2012. He was nominated for the Fulton Award because he “embodies all the characteristics that HGB stands for.” Berger’s manager went on to write, “To me, a great employee is someone you can count on to do the right thing whenever it needs to be done, and Matt is that person.” Berger has been involved with several quality initiatives ranging from service enhancements, patient safety and operational effectiveness. He has identified areas for improvement and implemented solutions. He continues to take on additional responsibilities and has developed as a leader. Berger “holds himself to high standards, leads by example and makes the people around him better.”

Hansen has worked at HGB since January 2017, and has recently been promoted to a director role. He was nominated for the Fulton Award because he goes above and beyond for employees, and for patients to ensure they have the best quality care. He creates an environment where HGB staff can accomplish the hospital’s core values. “I enjoy the approach Kevin brings to his departments, and we have seen improvements to employee engagement and patient satisfaction because of his efforts,” wrote his manager. “Additionally his vision for patient experience has resulted in new approaches to care.” Hansen is approachable, accountable and listens to his team, and “has a passion for success and commitment to quality and service.”

Dozens of HGB employees are nominated each year for the Fulton Awards by peers, supervisors and patients. The award is based on:

2. Innovation and creativity at work; and

3. Willingness to go beyond the call of duty.

The Fulton Award is named in honor of Robert Fulton for his many contributions as a member of the hospital’s board of trustees. Mr. Fulton was well known for helping bring to reality HGB’s dream of offering quality, local care. He took great pride in the annual award ceremony – not because it was named after him, but because he wanted to honor the nominees and recipients and the “excellence radiating through HGB.”

Hayes Green Beach Memorial Hospital has been the community’s choice for health care for nearly 85 years. HGB is committed to working together in health to provide quality care and enhance the vitality of the community. Learn more about HGB at www.hgbhealth.com.