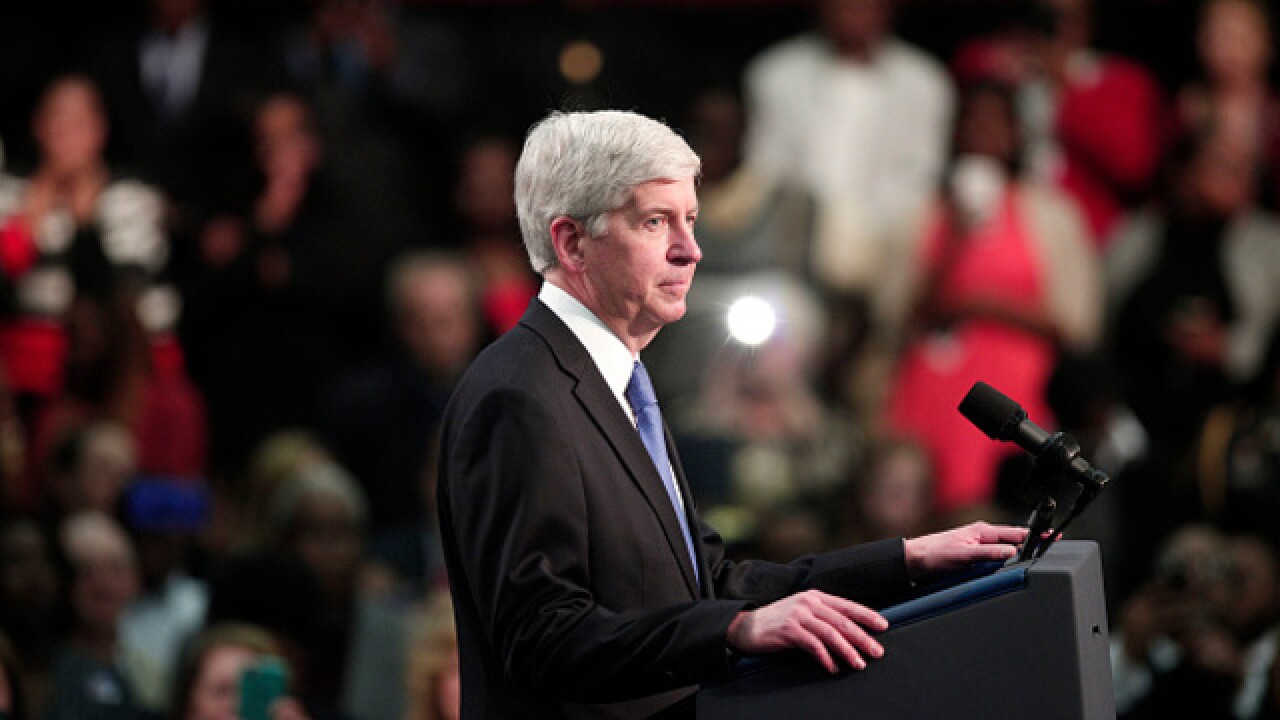 Image copyright 2017 Getty Images. All rights reserved. This material may not be published, broadcast, rewritten, or redistributed.
Bill Pugliano
<p>FLINT, MI - MAY 4: Michigan Governor Rick Snyder stands and listens the boos of the crowd when he takes to the stage to speak before U.S. President Barack Obama speaks at Northwest High School about the Flint water contamination crises May 4, 2016 in Flint, Michigan. While in Flint, the President will hear first-hand from residents about the water crises, and receive an in-person briefing on the federal efforts that are in place to help respond to the needs of the city's residents. (Photo by Bill Pugliano/Getty Images)</p>

Gov. Rick Snyder Wednesday declared a second state of disaster for Houghton County after heavy rainfall and widespread flooding on July 12 caused damage to the area still recovering from flash flooding in June. This declaration will allow the state to make additional resources available and open the Disaster and Emergency Contingency Fund to provide more financial assistance.

“As Michiganders in Houghton County continue to recover from severe flooding, we want to do all we can to get the community back on its feet quickly,” said Gov. Snyder. “While progress is being made in this situation, some of the local resources have been exhausted. This funding will help cover some of the costs incurred while responding to and recovering from this incident.”

By declaring a “state of disaster,” the state of Michigan makes available all state resources in cooperation with local response and recovery efforts in the disaster area as outlined in the Michigan Emergency Management Plan. Gov. Snyder’s declaration authorizes the Michigan State Police, Emergency Management and Homeland Security Division (MSP/EMHSD) to coordinate state efforts.

On July 13, Houghton County declared a local state of emergency after heavy rains caused widespread damage to homes and infrastructure on July 12. This follows a state of disaster declaration by Gov. Snyder for Gogebic, Houghton and Menominee counties for flash flooding on June 16-17.

The Disaster and Emergency Contingency Fund is used when communities demonstrate an exhaustion of local resources during a disaster or emergency. The money can be applied toward the immediate prevention, response and recovery of a disaster or emergency, as well as cover overtime for public employees, contracts used during the response, shelter supplies, gasoline used during the response and repair of public buildings and infrastructure.

Under extraordinary circumstances, the governor may authorize reimbursement from the fund to provide state assistance to counties and municipalities when federal assistance is not available.

The MSP/EMHSD will administer the grant program and assist local governments with applying for the funds.