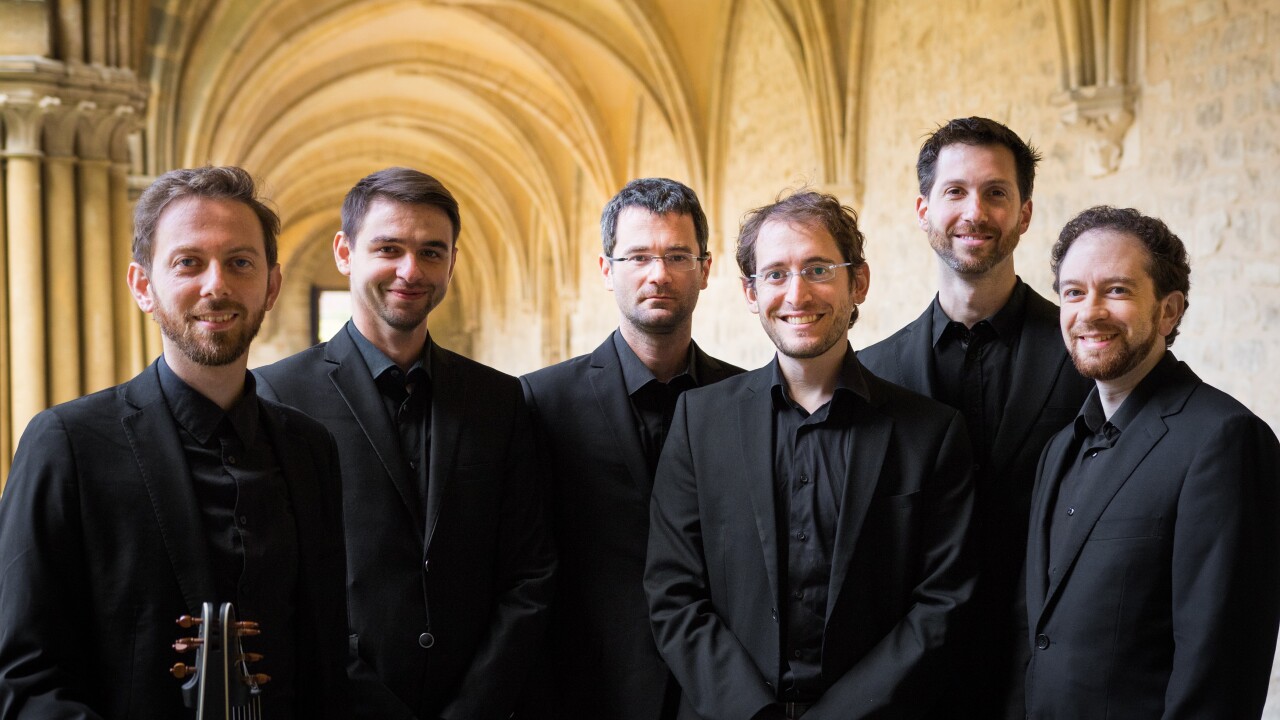 The program, entitled “Lamento d’Arianna: Music of the Italian Renaissance,” takes the listener on a journey back in time and place to Italy of the 16th and early 17th centuries. It will feature works by the giants of the late Italian madrigal, Claudio Monteverdi, Carlo Gesualdo, Luzzascho Luzzaschi, and Cipriano de Rore, as well as several lesser-known composers. Featured works will be two of Monteverdi’s great laments, Lamento della Ninfa and Lamento d’Arianna.

Profeti della Quinta is a vocal ensemble of five male singers, accompanied sometimes by harpsichord, but most often by a chitarrone (a large lute, also known as a theorbo). The ensemble was founded in the Galilee region of Israel by the bass singer and harpsichordist Elam Rotem, and is based in Basel, Switzerland.

In 2011 the ensemble won the York Early Music Young Artists Competition [ncem.co.uk] , and has since performed in Europe, North America, Israel, China and Japan. It gave concerts in prominent festivals and venues such as Oude Muziek Festival Utrecht, Beethovenfest Bonn, London Festival of Baroque Music, the Metropolitan Museum of Art in New York and the Shanghai concert hall. In 2017 the ensemble was the first to perform Monteverdi’s opera L’Orfeo in Israel. The ensemble has recorded two CDs with music by Salomone Rossi, which were warmly received by public and critics alike.

Rotem said that the program “traces the development of the Italian Madrigal, one of the most important musical genres of the Renaissance. This new genre allowed composers to freely experiment with new musical means to express the poetry and its affects.” He is joined in Profeti della Quinta by countertenors Doron Schleifer and Roman Melish and by tenors Lior Leibovici, Jacob Lawrence, and Loïc Paulin. Ori Harmelin provides the chitarrone accompaniment.

As part of their residency there will be a showing of Hebreo: The Search for Salomone Rossi, a 45-minute documentary film by Joseph Rochlitz. Rossi (ca. 1570-1630) was an Italian Jewish composer who worked in the ducal court of Mantua during the transition between the late Renaissance and early Baroque. His best-known work is Hashirim asher li’Shlomo (1623), the first publication of polyphony in Hebrew. The singers of Profeti della Quinta are featured in the film, which was shot on location in Mantua’s ducal palace. The singers will be on hand to perform works by Rossi following the film and to answer questions. This special showing and Q&A is free and open to the public and will be held in MSU’s RCAH Theatre (Room C-20) in Snyder-Phillips Hall on Monday, January 27th at 7 p.m., made possible by the Michael and Elaine Serling Institute for Jewish Studies and Modern Israel.

The Profeti della Quinta residency includes a choral master class with singers from the University Chorale on Monday, January 27 at 1:50 in Hollander Hall within the MSU Music Building. The master class is free and open to the public.

Last year, MSU lost a truly remarkable educator with the passing of Dr. Taylor Johnston. As an MSU professor of 51 years, Dr. Johnston harbored a long-time passion for music, particularly early music, which led to the establishment of the Taylor Johnston Early Music Series. The impact Dr. Johnston made on the Greater Lansing music community will be felt for years to come.

Other upcoming performances in this series:

More information can be found at the following website: https://www.music.msu.edu/event-listing/profeti-della-quinta [music.msu.edu] .