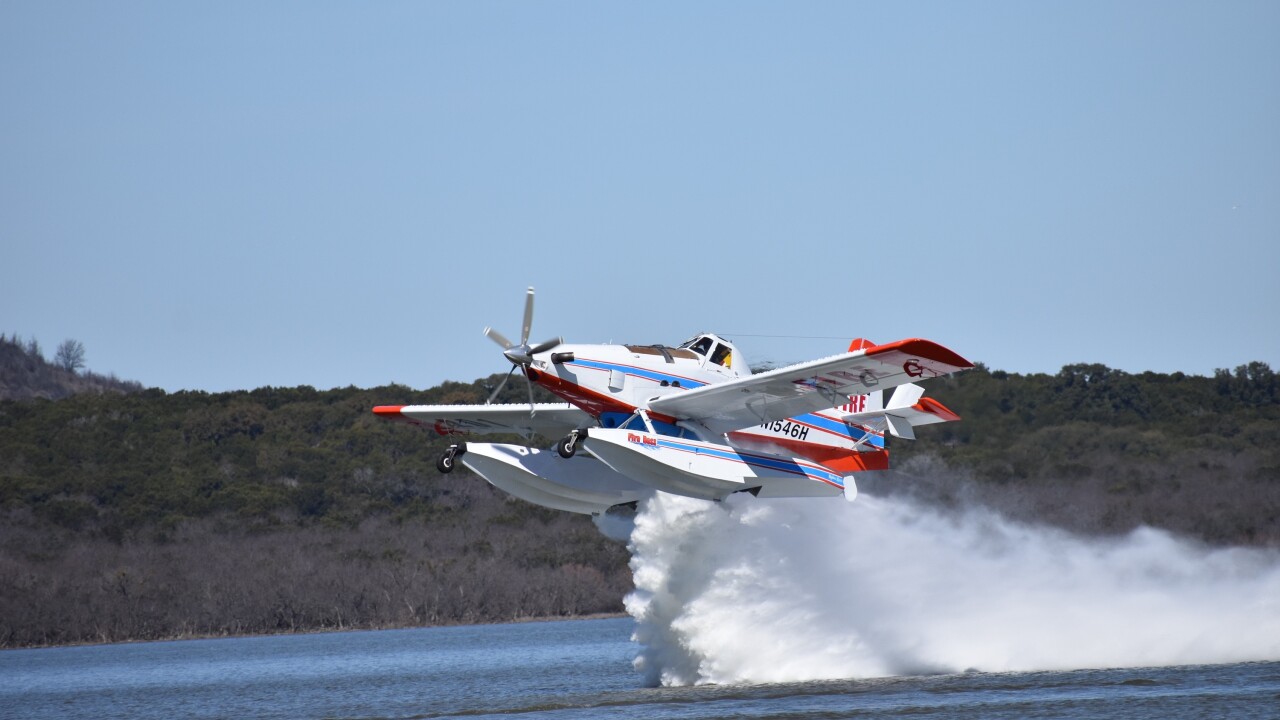 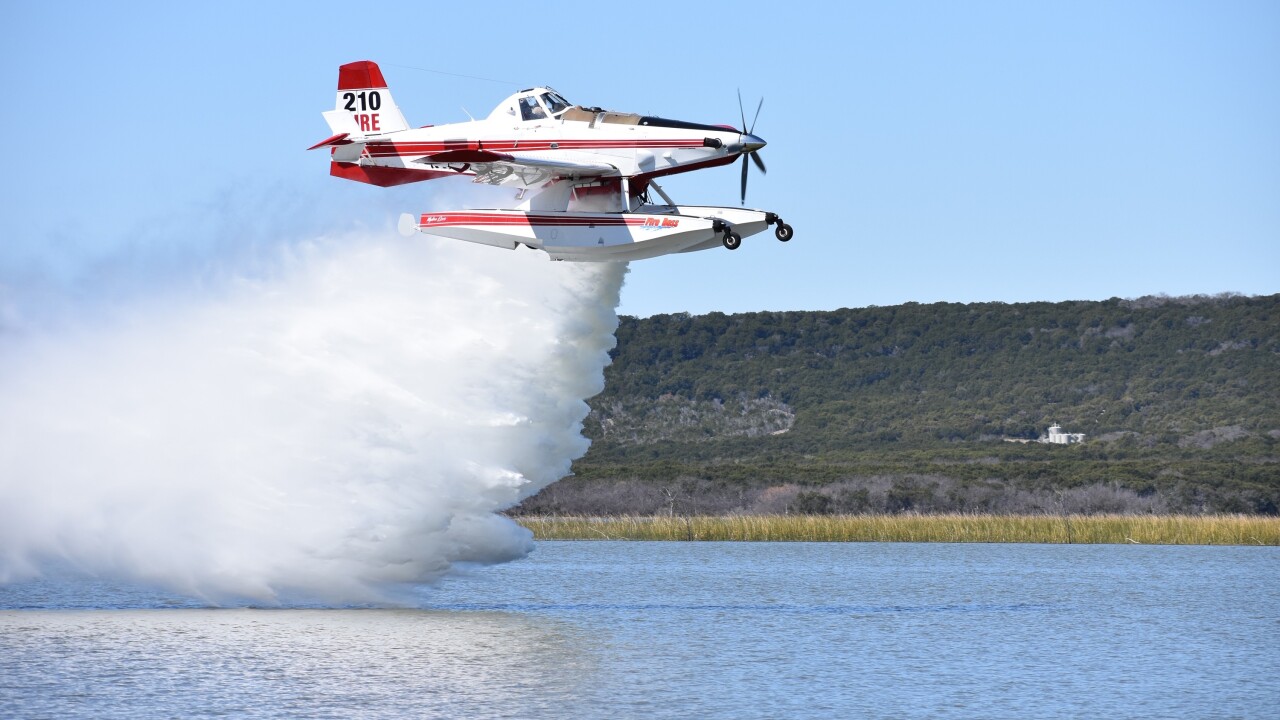 The Fire Boss, as it’s known, is a versatile aerial firefighting resource that can be dispatched in five minutes or less and can deliver 20 loads, or 14,000 gallons, of water per hour for three sustained hours. Runyan noted that the cruising speed of the AT-802 is 160 knots. “It’s 1,600 horse-power turbine and 60-foot wingspan make it an impressive tactical resource.”

Modified from the AT-802, a crop-dusting aircraft, the Fire Boss is an amphibious scooper air tanker and resembles a larger version of Disney’s Dusty Crophopper in the animated movie Planes 2: Fire & Rescue.

“Once airborne, the scooping run loads up to 820 gallons of water in less than 30 seconds in under a mile,” said Runyan. “The ability to have such fast turnaround time makes this aircraft a very desired and versatile aerial tool for fire managers to get on scene and perform initial attack quickly. It can also land in remote locations with shorter runway lengths.”

While the aircraft excels in mountainous terrain and wildland-urban interface areas, its precision and accuracy of water drops is safer for working ground crews, structures and other fire equipment than the larger airtankers often seen on the western fire front. The Great Lakes region provides ample water inland with shorter runs across lakes. “The Fire Boss is a very economical and versatile aircraft to operate in the interior of Michigan,” Runyan noted. Runyan stated, “The Chinook arrived Thursday. Originally designed in the late 1950’s as a heavy lift helicopter, it was used extensively during the Vietnam War and still reigns as the work horse of the US Army,” said Runyan. “When the concept of aerial firefighting with the heavy helicopter was created, it required the helicopter to be retrofitted for firefighting. It eventually evolved from using a dipping bucket to drafting water with an exterior snorkel and storing it in a 3,000-gallon internal tank,” he said. To coordinate the aerial suppression operation, an Air Tactical Group Supervisor (ATGS), is assigned to the incident “providing tactical coordination with the incident commander on the ground and directing airtankers and helicopters to critical areas of a fire for retardant and water drops,” Runyan said. “The Air Attack Platform, an AC-690, can stay on scene for up to five hours relaying information and coordinating the movement of aircraft into and out of the air space,” he added. While the resources are standing by and ready to go operational, fire management keep abreast of multiple resources to gather vital information pertaining to current conditions around the state. Calculations from weather stations, visitor use across the forests and reports of wildfires from

cooperators help to determine the variables that come with fire danger that have direct impacts on ignitions. Having the aerial resources available allows fire managers the latitude to act swiftly to protect the public in the event of a wildfire. With recreation being a prime activity at this time of year, the USFS recognizes the significance of aerial operations in successful initial attack on a new start. Huron-Manistee National Forests Fire and Aviation Staff Officer Joe Alyea said that the stretch of dry, hot weather has no definitive end in sight. “The prepositioning of this aircraft makes response time critical during elevated fire danger,” Alyea said, adding “With critical levels reaching thresholds of extreme fire danger, the need to respond to and engage operationally is paramount if we don’t want to have a large landscape scale wildfire. Public and firefighter safety is always at the forefront of any wildfire operation. Until the fire danger drops, vigilance is our best tool for a safe and fast response.” Alyea noted that while the Independence weekend brought multiple wildfires caused by amateur aerial fireworks, he said the leading cause of wildfires the Forest Service responds to is still debris burning. “It is imperative that residents check the Michigan Department of Natural Resources Burn Permit website to verify that the state agency is issuing burn permits. If permits are not being issued, then residents should be observing the temporary suspension of the permits,” Alyea stated. He added that while many people are burning their yard debris, there are also numerous debris fires that include household trash and recyclables which create additional hazards for first responders, such as air quality. “Firefighters are not equipped with Self-Contained Breathing Apparatus. It’s not just wood smoke that is being inhaled but toxic fumes from plastics and other materials that should be recycled or landfilled,” Alyea said. While the USFS works closely with other land management agencies to coordinate mutual aid response, they also work closely with the National Weather Service (NWS) locations across the state. Meteorologist Sabrina Jauernic said, “We saw some increase in widespread rainfall before the weekend but not enough to lessen the fire danger back to low or moderate.” Products, such as the fire weather report, aid fire planners in resource ordering and prepositioning. When asked if the area might see any Red Flag Warnings or Fire Weather Watches, Jeff Lutz, NWS Fire Weather Forecaster out of Gaylord said, “The current pattern, while dry and extremely warm, has not resulted in relative humidities below 25% or winds at 20 feet, sustained over 15 mph. So, I do not see those criteria being met over the next two weeks.” Lutz went on to say that he could see the summer heat last into fall, which raises the concern of drought. Lutz noted “The drought monitoring people, and the climate prediction center, seem to think that we won't be in drought through July. Although along the Michigan/Indiana/Ohio border, some drought is expected to develop this month.” With wildfire danger elevated and the weather not cooling off any time soon, Wildfire Prevention and Mitigation Education Specialist Debra-Ann Brabazon encourages the residents and forest visitors to stay vigilant. “Not enough can ever be said about preventing that one spark that will be the cause of a wildfire. By being conscientious of your campfire and insisting that the public follow the Drown, Stir and Feel method of extinguishing a campfire helps to decrease the risk of a wildfire from a campfire,” she said, adding “However, open burning of debris can be avoided by utilizing alternatives. Composting, chipping and piling debris until winter might be a better alternative to burning right now.” Brabazon said that when prevention fails to keep a spark from igniting a wildfire, the next defense is mitigation. “Making sure that your home has defensible space and that flammable materials have been removed from conducting flames to your home is just one mitigative factor that can save your home from a wildfire.” She added that repairing broken windows, missing shingles, moving the firewood pile away from structures and cleaning the roof and gutters from flammable materials like twigs, leaves and drying moss are easy and inexpensive way to keep your home safe. These home hardening steps are often inexpensive and require some sweat equity from the property owner.

“If your prevention plan fails, and your mitigation plan is also impacted adversely, then all that’s left is evacuating,” Brabazon pointed out. “Ready.gov has vital information for residents to prepare a “Ready! Set! Go!” plan to aid an easy evacuation process. Everyone has a job, a responsibility and is ready in the event of any type of evacuation,” she said. ++++++++++++++++++++++++++++++++++++++++++++++++++++++++++++++++++++++++++++++ Image DAB_1259: Aerial wildfire suppression resources including two Amphibious Air Tractor 802Fs, or Fire Bosses, are stationed at the Gaylord Regional Airport along with a Chinook Helicopter and an Aero-Commander 690. Available for local, state and federal wildfire response, these aircraft can be dispatched within minutes of the notification of an active wildfire. (Photo courtesy of the US Forest Service.) Image DAB_1268: Fireboss Pilots David Fennen (left) and Paul Wizner (right) discuss possible water scooping sites for their amphibious aircraft as preplanning during the elevated fire danger with Air tactical Group Supervisor Mark Braasch (center). Fennen who flies for Dauntless Air was a crop duster before turning to fire seven years ago. Wizner, also a crop duster by trade, began wildfire suppression just three years ago and follows in his stepfather’s footstep who was a wildfire airtanker pilot in the 1970’s. Braasch, who has a career as a wildland firefighter with the Wisconsin Department of Natural Resources, retired three years ago and began working as a casual hire Air Tactical Group Supervisor with the US Forest Service. Braasch will coordinate the aerial assault on wildfire from the air in coordination with the incident commander on the ground. (Photo courtesy of the US Forest Service.) Image DAB_1268: Fireboss Pilot David Fennen goes over the preflight check of his Air Tractor 802F. The impressive aircraft is known for its agility and maneuverability over the fireground during initial attack. The plane has a cruising speed of 160 knots. (Photo courtesy of the US Forest Service.) Image DAB_1268: Fireboss Pilot David Fennen climbs into the cockpit of the Air Tractor 802F to prepare for a wildfire. While the response was later cancelled by dispatch, the pilot and craft can respond within five minutes from receiving the initial dispatching notice from the Michigan Interagency Dispatch Center, located in Cadillac, MI. (Photo courtesy of the US Forest Service.) Dauntless Air Images 1 and 2: The Air Tractor 802F, or “Fire Boss” as it’s known, is a versatile aerial firefighting resource that can be dispatched in five minutes or less and can deliver 20 loads, or 14,000 gallons, of water per hour for three sustained hours. The cruising speed of the AT-802F is 160 knots. It’s 1,600 horse-power turbines and 60-foot wingspan make it an impressive tactical resource. Its precision and accuracy of water drops is safer for working ground crews, structures and other fire equipment than the larger airtankers often seen on the western fire front. (Photo courtesy of the US Forest Service.) Imovie, videographer Dauntless Air Pilot David Fennen. (Video courtesy of the Dauntless Air.) NWS_20200708_145138499: National Weather Service (NWS) Meteorologist in Gaylord Sabrina Jauernic observes the radar and satellite data on the left screen and at minimum relative humidity values on the right screen. Working closely with wildfire response personnel, the NWS prepares a daily fire weather forecast from early spring, late into fall. While the NWS does not anticipate any Fire Weather Watches or Red Flags, the summer heat has the potential to stick around into fall. Fire danger remains elevated to critical levels despite the rainfall we did receive. (Photo courtesy of the National Weather Service, Gaylord, MI.)