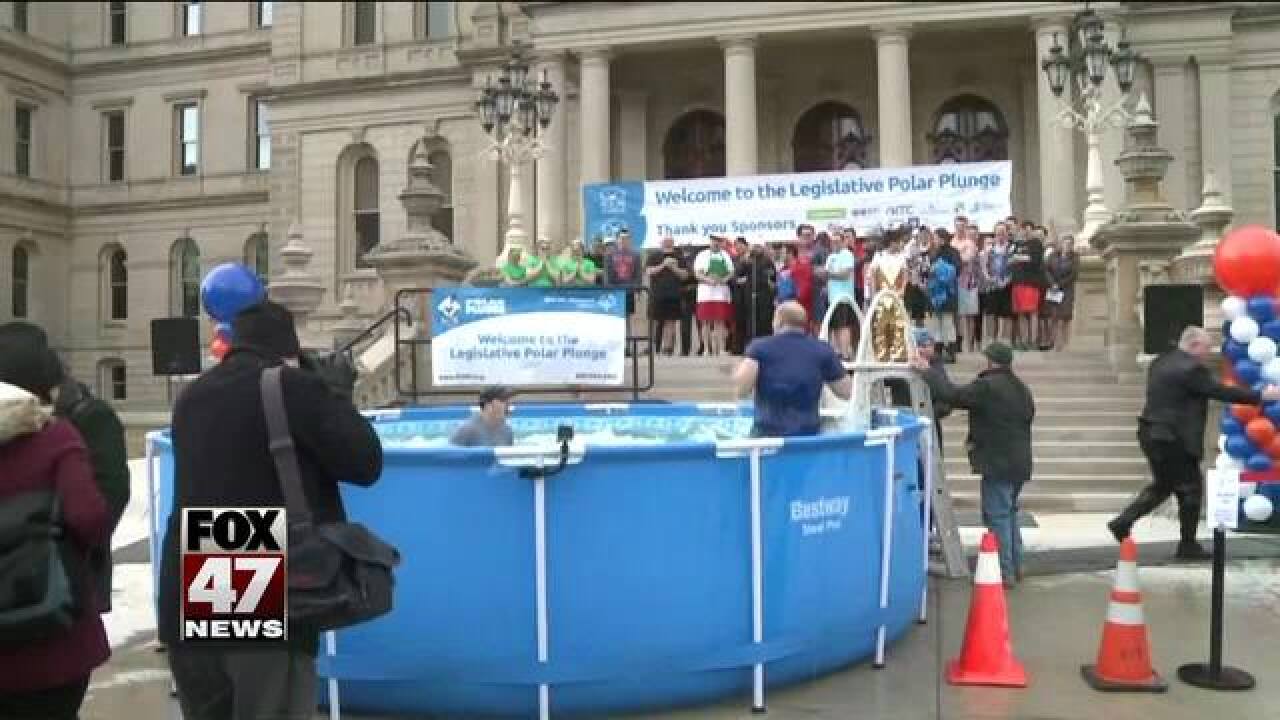 Michigan Legislators, along with Lieutenant Governor Brian Calley, will plunge into an icy pool in front of the Capitol steps in Lansing on Thursday, March 1 at 3:00 p.m. as part of the seventh annual Michigan Law Enforcement Legislative Polar Plunge. High definition video and high resolution photos will be available for download following the event. See details below.

This one of a kind event at the Capitol provides plenty of funny moments and great photo and video opportunities for spectators and plungers alike, while helping raise funds and awareness for Special Olympics Michigan (SOMI) athletes in the process. The Legislative Polar Plunge has raised nearly $170,000 for SOMI athletes over the last six years.

Three Sergeant at Arms for the Michigan Senate Police will also take the Plunge:

Wednesday, March 7 is “Spread the Word to End the Word Day” – a worldwide day of awareness aimed at eliminating the use of the word “retard(ed)” from everyday speech.

In March of 2014, the Michigan House and Senate unanimously voted to remove the “R-Word” from state laws. On March 28, 2014, Lt. Governor Brian Calley signed the “R-Word” package of bills, officially removing the term “retard(ed)” from state laws and replacing it with the term “developmental disability.” There are only a handful of states left that have yet to take similar measures. The terms “mental retardation” and “mentally retarded” were removed from federal health education and labor policy in 2010.

MEDIA NOTE: High Definition video from the Legislative Polar Plunge will be available for download in time for your late local newscasts. High Resolution photos will also be made available. A media alert email will be sent to statewide media on the evening of Thursday, March 1 when video and pictures are available for download.

The Legislative Polar Plunge is one of 28 Polar Plunges taking place across Michigan in 2018. The Polar Plunge series is known for its zany costumes and courageous participants. After raising funds, these participants dress up in costume and prepare to plunge, ready to jump in and freeze their fur for a good cause. Funds can be raised by collecting pledges from friends, family, coworkers and neighbors. For more info, and to register for the remaining plunges, visit PlungeMI.com.

Proceeds from these plunges help support year-round sports training and athletic competition for more than 23,000 children and adults with intellectual disabilities in Michigan.