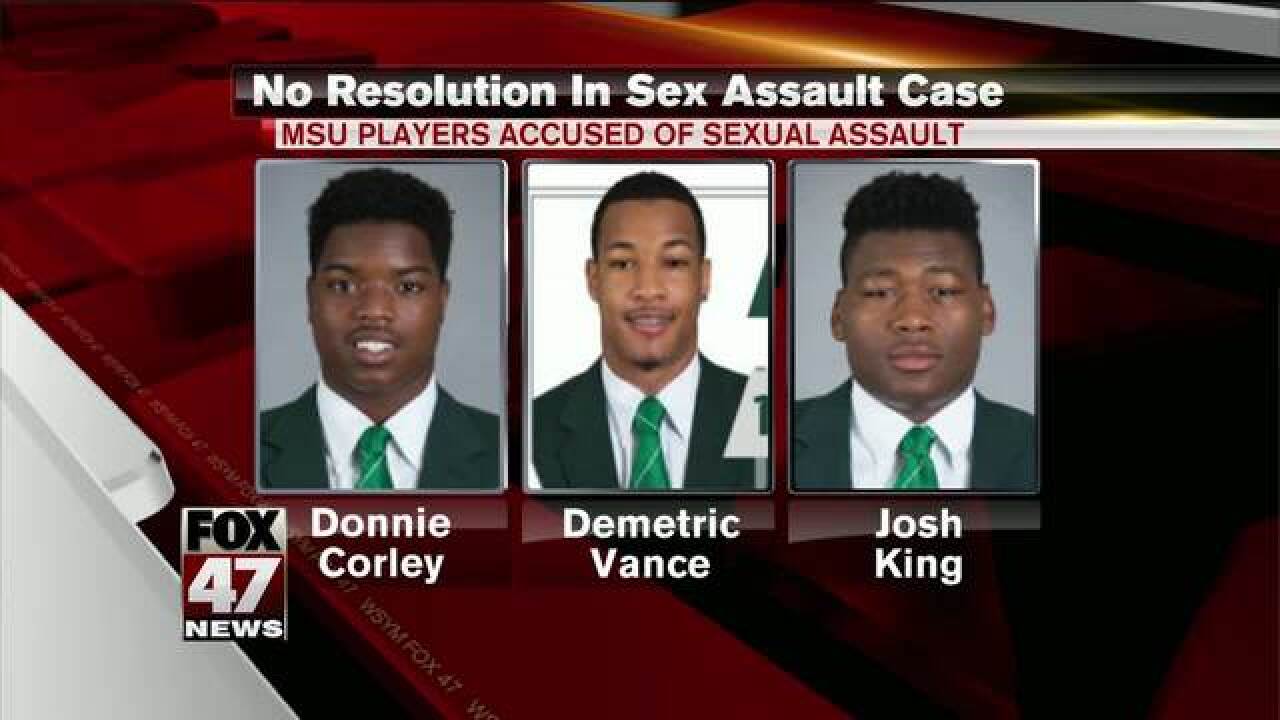 A timeline of the events, and investigations that lead to sex assault charges against Michigan State University football players.

Three players, and a football staff member are suspended. This is connected to the January 16 alleged sexual assault.

MSU spokesman Jason Cody confirms the suspension of Curtis Blackwell, a key member of the MSU football staff. Blackwell was suspended from the university, with pay.

Blackwell was the Director of College Advancement and Performance. He was heavily involved with recruiting members of the football team, and mentoring players. Blackwell had been with the football program since August of 2013.

The MSU police submit warrant requests to the Ingham County Prosecutor’s Office, regarding their investigation of an alleged on-campus sexual assault.

“Earlier today, our office received warrant requests from the MSU Police Department in a reported case of sexual assault that occurred on the campus this past January. Detectives from the Michigan State University Police Department have conducted a thorough and professional investigation of this incident.

I have asked the MSU Police Department to continue that investigation and submit to our office additional information and evidence. Upon the review of those materials, I will determine a charging decision in this matter.”

Mark Dantonio says he couldn’t comment on the investigation, but he wants to answer what he could about the football team.

A fourth MSU football player is suspended from the team after Meridian Township police receive a report alleging he sexually assaulted a woman. Police say this is separate from the case against the three football players.

Ingham County Prosecutor's Office confirms that Robertson has waived extradition and is voluntarily coming back to Michigan.

Auston Robertson is formally charged with third degree criminal sexual conduct. He could face up to 15 years in prison if found guilty.

The president of Michigan State University, Lou Anna K. Simon, releases a statement to the MSU community regarding the issue of sexual assault at MSU.

May 24, 2017 - MSU football players found in violation of Title IX; what happens next

Three MSU football players might face disciplinary action after the university finds they violated the school's title IX policy. A board will decide what actions to take.

MSU fooball coach Mark Dantonio decides not to renew the contract of staff member Curtis Blackwell. The University will not say if he is the staff member suspended as part of a sexual assault investigation involving three players.

June 6, 2017 - 3 MSU players kicked off team after being charged with sexual assault

After a criminal investigation is complete the Ingham County Prosecutor's Office charges Joshua J. King, Demetric D. Vance and Donnie L. Corley Jr. for their involvement in an incident that occurred Jan. 16 on campus.

20-year-old Demetric Vance, a former MSU football player and student is arraigned in district court on a count of third-degree criminal sexual conduct.

June 6, 2017 - Mark Dantonio and MSU Athletic Director speak out about their anger and disappointment during press conference

The MSU Athletic Department holds a news conference to discuss the football program and the dismissal of three players who have been charged with sexual assault.

"You see problems, you push through problems,” Coach Mark Dantonio says. “That's always been my way of dealing with things. That's what we'll continue to do. I feel like today is an end point in some respects."

MSU trustee Mitch Lyons revels that Auston Robertson was the player who alerted coach Mark Dantonio to the sexual assault allegation that led to three other players being charged.

Lyons shares this information during an interview on sports radio show The Huge Show:

"When Auston Robertson came into his office for a regular weekly meeting you know Coach D asked the regular questions he typically asked him and then he became a little emotional and didn't even go into details, he just alluded to the fact that something happened and Coach D had a sense that it involved some sort of sexual allegation and he immediately said, 'Hey, don't say anything more.' He called the OIE office, got the appropriate person involved."

Judge decides to move the next conference back by three months to give the defendants' lawyers more time to examine evidence and find a time when all three attorneys would be available again. The date for the next conference is now scheduled for September 15.

Robertson's accuser testifies during a preliminary hearing that she verbally and physically tried to get Robertson to stop. A second count of Criminal Sexual Conduct is added to the first charge. Robertson is due back in court on July 5.

A pre-exam conference was held for three MSU football players accused of sexual assault. It began at 8:30 a.m.

Lawyers for the players met prosecutors in the judge's chambers Friday. Nobody would comment afterwards.

February 21, 2018 - Former MSU football players to be in court for pretrial conference

Three former MSU football players accused of sexual assault are scheduled to be in court for a pretrial conference Wednesday at 8:30 a.m.