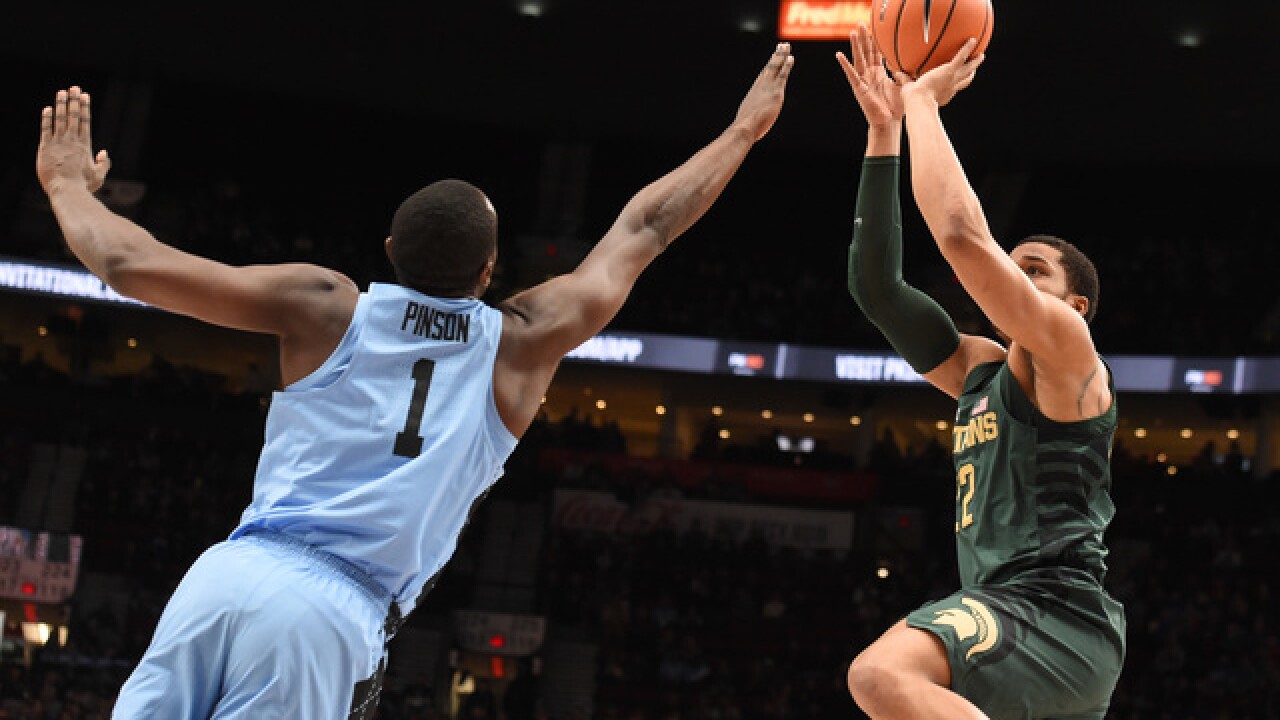 Joshua Lanford made five 3-pointers and scored 23 points and No. 4 Michigan State toppled No. 9 North Carolina 63-45 on Sunday night to win the "Victory Bracket" of the PK80 Invitational.

Tom Izzo got the best of Roy Williams for the first time since Williams arrived in Chapel Hill, thanks to a dominating performance at the defensive end by the Spartans. Michigan State bullied the Tar Heels on the interior at both at both ends of the floor and getting just enough offense on a night North Carolina struggled to make anything. The Tar Heels shot just 24.6 percent, the worst-shooting game in North Carolina history.

Williams had won all seven previous matchup between the Tar Heels and Izzo's Spartans.

Langford was key in the first half as the Spartans (5-1) built a 13-point halftime lead despite Miles Bridges and Jaren Jackson Jr. being limited with foul trouble. Langford had 14 points in the first half as Michigan State used an 11-4 run to take control and were never threatened by the Tar Heels.

Theo Pinson led North Carolina (5-1), but Joel Berry II and Luke Maye both had awful nights. The Tar Heels trimmed the 21-point deficit to 12 with 4:30 left, but Bridges stemmed the run with a driving layup.

Maye had been brilliant to start the season for North Carolina but was 3 of 13 shooting, missed five free throws and finished with just eight points. Michigan State challenged seemingly every shot in the paint and the Tar Heels had no outside shooting. North Carolina was 1 of 18 on 3-point attempts, also the worst in school history.

North Carolina's night was so awful even the easiest plays became difficult. Kenny Williams made a fine interception of a pass in the first half but his breakaway layup caromed off the front rim and Winston drilled a 3-pointer at the other end to push Michigan State's lead to 33-17. Late in the second half, Maye was wide open on a drive down the lane, yet his layup didn't even touch the rim, his 10th miss of the game.

North Carolina shot 7 of 30 (23 percent) in the first half and Berry's desperation flip at the halftime buzzer was the Tar Heels' only 3-pointer of the night.

North Carolina: The Tar Heels continued their streak of making at least one 3-pointer to 713 straight games dating to 1997. Barely. Berry's 30-footer to end the first half was the only make and the Tar Heels shot under 10 percent from deep for the first time since late in the 2016 season against Duke.

Michigan State: Bridges appeared mostly recovered from the sprained left ankle that had limited the preseason All-American in the first two games of the tournament. Bridges played 26 minutes and had five rebounds.