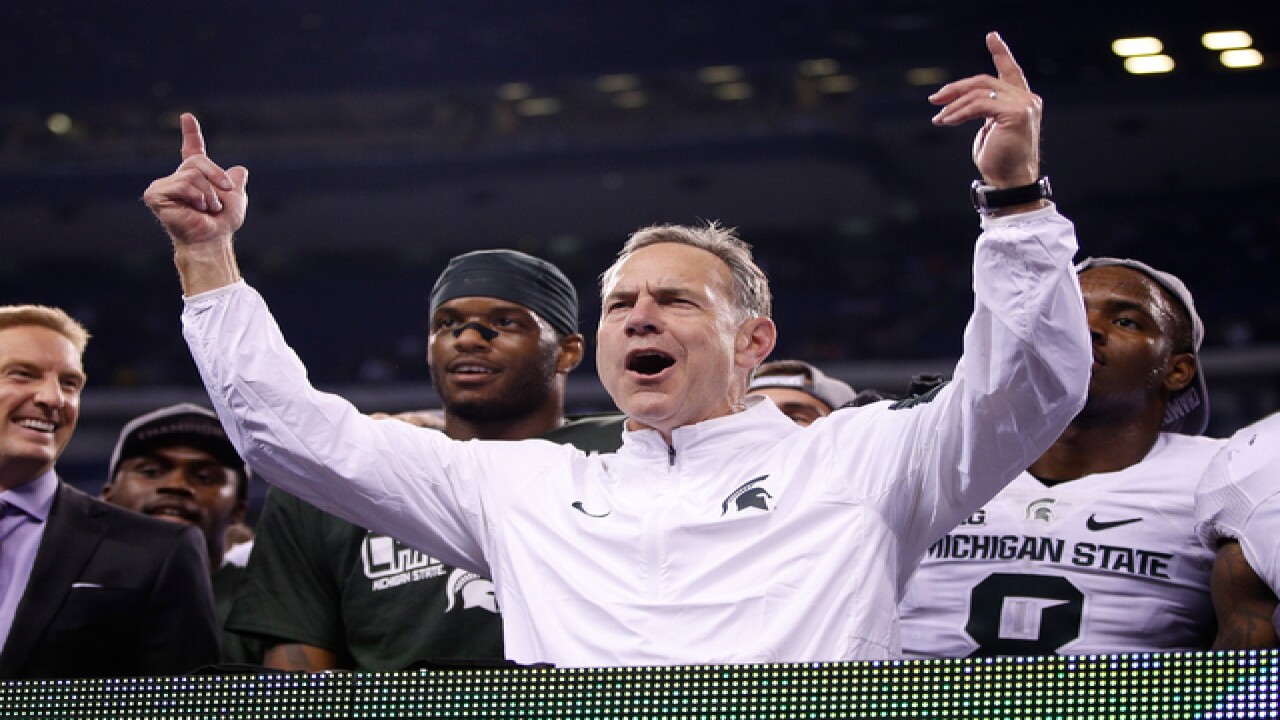 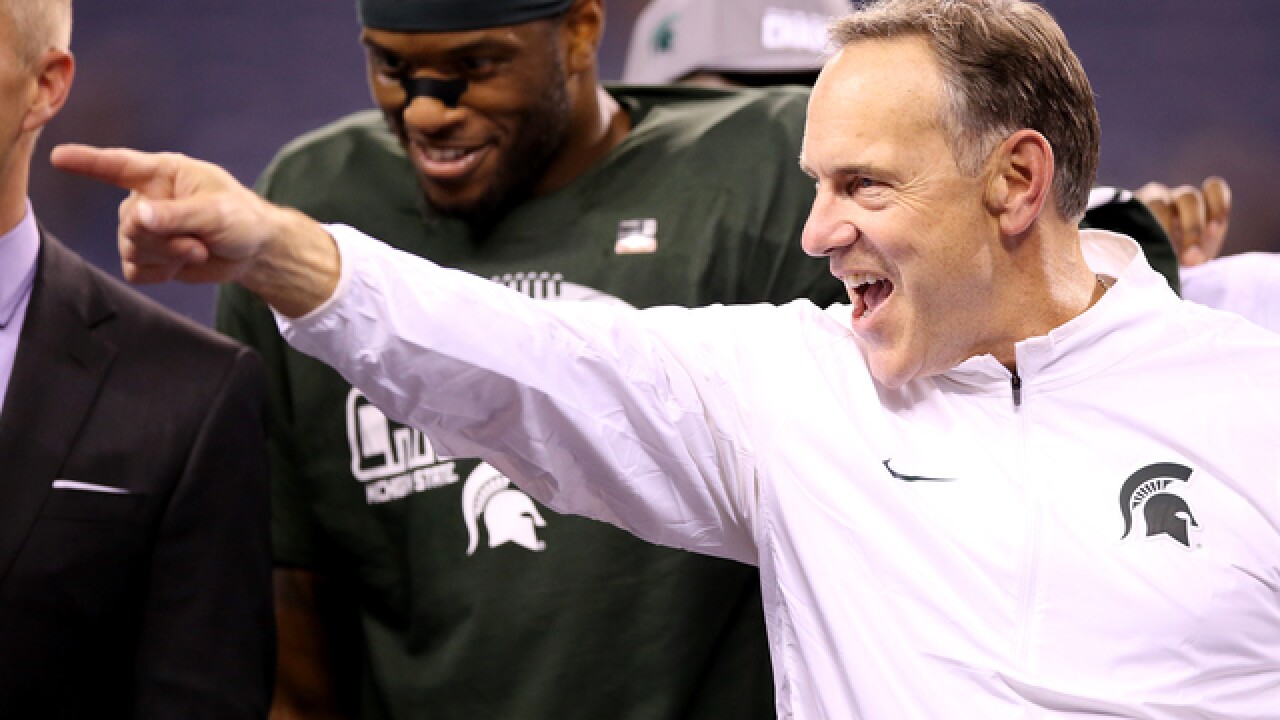 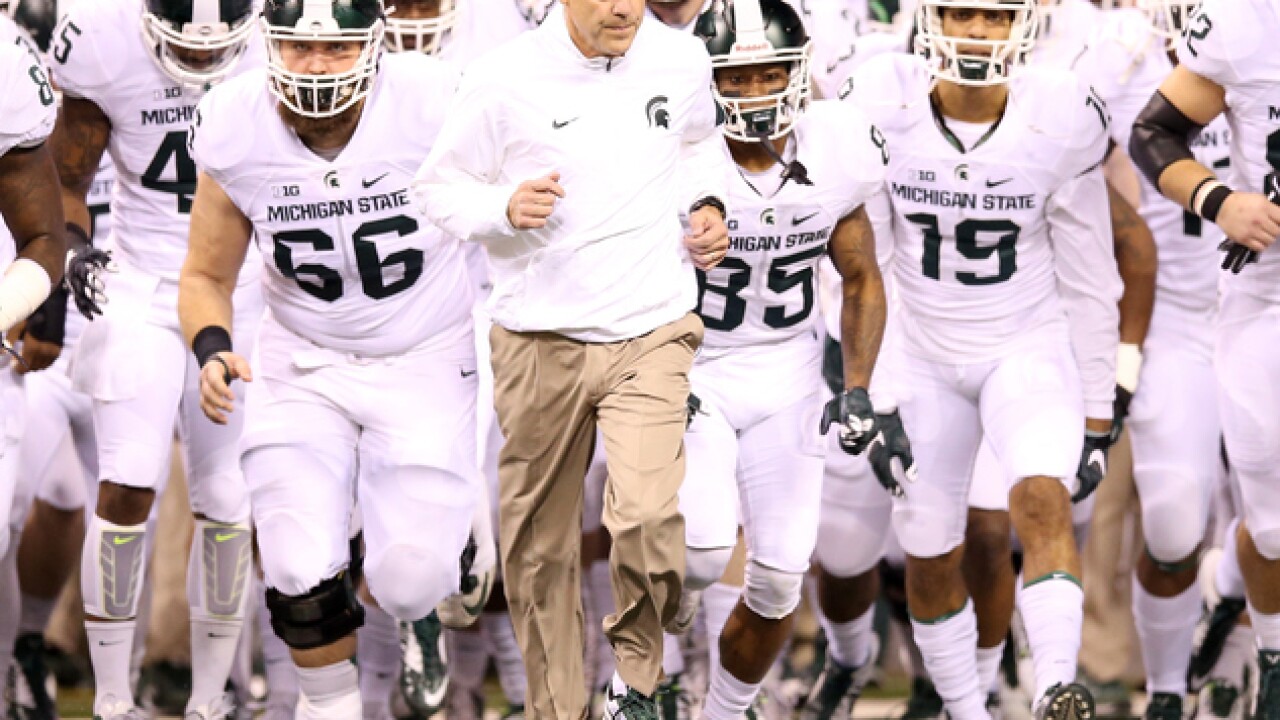 Michigan State head football coach Mark Dantonio, who has compiled a 36-5 record (.878) over the last three seasons including two Big Ten Championships and three Top 10 finishes in the national polls, has been rewarded with a revised contract, according to a joint announcement made Friday, Feb. 19 by MSU Athletics Director Mark Hollis and MSU President Lou Anna K. Simon. Michigan State’s 36 wins since 2013 are the fourth most in the NCAA Football Bowl Subdivision.

Since 2013, Michigan State is one of only four schools in the nation to play in a Bowl Championship Series Game (2014 Rose Bowl), a New Year's Six game (2015 Cotton Bowl) and the College Football Playoff (2015 CFP Semifinal at the Cotton Bowl) in the last three seasons (Alabama, Florida State, Ohio State).

The amended contract also provides Dantonio with post-coaching employment for one year if he retires before Jan. 15, 2020, with a salary of $1 million. In addition, the buy-out provision of the contract has been eliminated if he leaves employment.

With the revisions, Dantonio’s annual compensation increases from $3.67 million to $4.3 million.

Here are the annual compensation components of the amended contract:

Hollis also announced that nearly $250,000 has been allocated to enhance the salaries of the assistant coaches.

“With a berth in the College Football Playoff this past season, Coach Dantonio has again shown his excellence in building a nationally prominent football program,” President Simon said. “He is an outstanding leader committed to MSU’s values who empowers his players to become the best Spartans they can be, whether on the field, in the classroom or as part of the MSU community.”

“With three-straight Top 10 finishes and two Big Ten Championships during that same period, Mark Dantonio and his coaching staff have built an elite football program,” Hollis said. “Michigan State’s football brand has never been stronger. We’re so excited about the future of our football program under Mark’s leadership and direction.

“The amended contract and enhanced compensation reflect his and his coaching staff’s value in the current marketplace. These updated figures ensure that Mark and his assistants remain in the upper tier of the Big Ten.

“Mark and his staff have created a winning culture as well as an environment that encourages current and future student-athletes to pursue excellence in the classroom, in the community and on the playing field. It’s obvious that Mark and his assistants are committed to building relationships that will last well beyond their four- or five-year college experience.”

“The University remains committed to providing all of the tools necessary to sustain a championship-caliber football program,” Dantonio said. “I wish to thank President Simon, Mark Hollis, the Board of Trustees and the entire administration for their trust, loyalty and support.

“Coaching staff continuity remains extremely important for the long-term success of our football program. We have had outstanding coaches and support personnel, who have been committed to having a positive impact on the lives of our student-athletes. Coaching is teaching, and our coaches do it as well as anyone in the country. We’re excited about what our program has accomplished over the last nine years – the last three seasons in particular. We truly believe the best is yet to come. We will continue to strive for excellence in all aspects of our program.

“Our current and future student-athletes understand the expectations of our program. Our focus remains on winning championships, graduation and teaching social responsibility. Over the last three years, we have competed as one of the elite teams in the country. Our student-athletes have embraced this distinction as well as the expectations that accompany it. We will continue to dream big.”