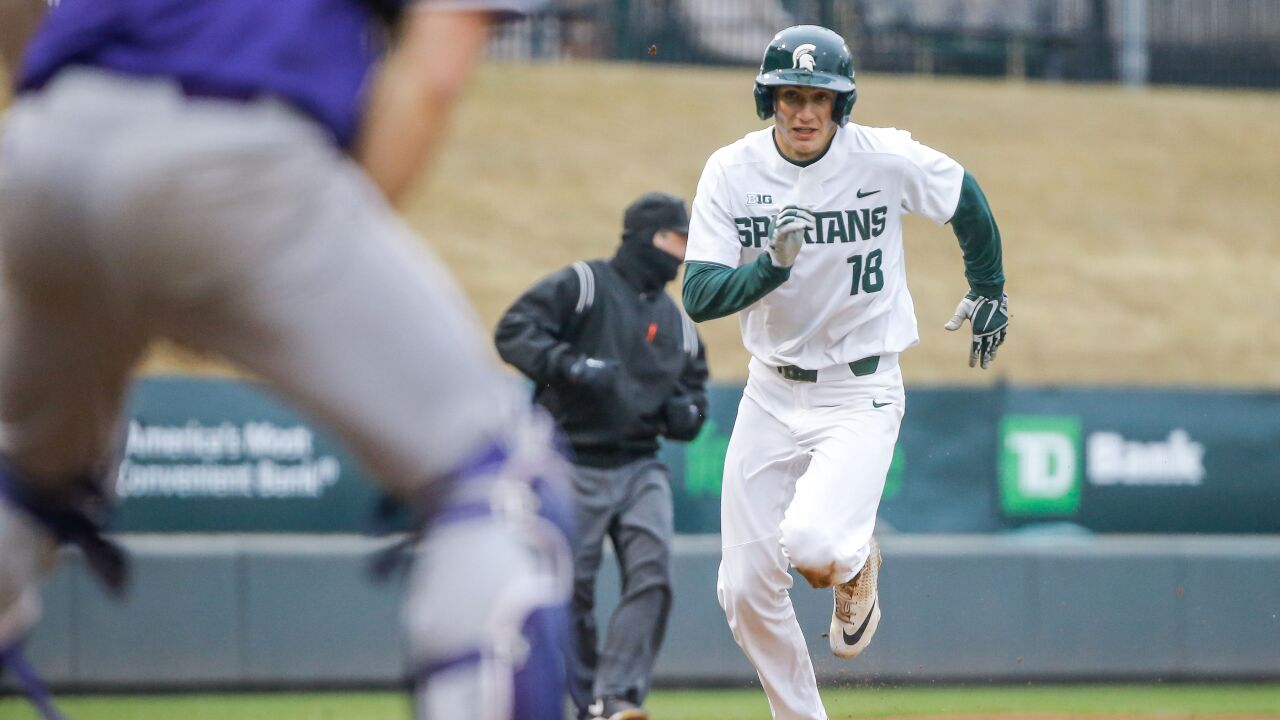 MSU and ISU have played a pair of one-run tight games so far this weekend after the Spartans’ thrilling 1-0 10-inning victory for MSU Friday night on a walk-off suicide squeeze bunt in the inaugural game under the lights.

Tyranski went a career-long 7.0 IP, chalking up six strikeouts, one shy of his season-high, while scattering just three hits, including none after the third inning. At one stretch, Tyranski had a streak of 15 batters set down in conventional and non-conventional order, working around a single in the third with a double play. The Sycamores scored their two runs in the first inning, before Tyranski settled in and was dealing.

“I thought he got better as the game continued to wear on; aside from the first two hitters of the game, I thought he was really, really good and they never really threatened past that,” MSU head coach Jake Boss Jr. said. “So it was a good step for him moving forward; I think he deserved better by the way he pitched. He threw a lot of strikes, he attacked the strike zone and was able to induce a lot of weak contact, and again we’ve pitched it extremely well today.”

Liberatore was equally solid on the mound, going a season-long 7.2 IP, holding MSU’s bats to three hits, in improving to 5-0 on the season. Grauer pitched the final 1.1 IP to earn his fifth save of the season.

Senior outfielder Dan Chmielewski, senior infielder Royce Ando and senior catcher Nic Lacayo had the three hits for the Green & White, with Ando roping a double down the left field line in the seventh. After Ando moved up to third on a wild pitch, Chmielewski followed by lacing a single to right to drive in Ando.

“We competed, they pitched it really well again today, so again if you’re a baseball purest it’s one of those games you love to watch. Unfortunately for us, we didn’t make it difficult enough on them offensively on our end,” Boss said. “We didn’t make a lot of whole lot of solid contact, the few times we did hit the ball hard they seemed to be right at guys and that’s kind of the way the game goes, we hit a lot of weak fly balls, a lot of weak ground balls today. I think we lost some of the technique and fundamentals today at the plate from a mechanics perspective and our approach wasn’t maybe what it should have been early in the game, so we have a chance to come back and win the series tomorrow and we need to be able to be more threatening offensively.”

Junior outfielder Bryce Kelley reached on a walk and stole second in the eighth, giving him 10 stolen bases on the season and 56 for his career. Kelley has four swipes in the last four games. The 56 stolen bases is just five away from the No. 3 spot on the MSU career stolen base list, held by Brandon Eckerle with 61.

After playing 10 innings without a run on Friday, the Sycamores bolted out of the gates Saturday, plating a pair of runs in the top of the first. Leadoff hitter Luke Fegen drew a walk and Clay Dungan followed with a triple to the gap in right center to drive in Fegen. Jake Means followed with an RBI groundout to short and ISU had a 2-0 lead.

From that point on, Tyranski was dealing and stymieing the Sycamores, working around a leadoff single in the third by Fegen, but a double play on a lineout to sophomore infielder Zach Iverson at third, who threw over to junior infielder Justin Antoncic at first to double up Fegen.

Tyranski went three-up, three-down for the next three innings, before working around a pair of walks in the seventh, but getting out of the jam with a groundout. Panaranto, who is the lone native of Indiana on the Spartans’ roster, came on to open the eighth, and he held ISU to just a one single as the only baserunner.

Despite the solid pitching, the MSU bats were equally held in check by ISU and the Spartans were unable to get anything going for a rally.

Michigan State and Indiana State wrap up the three-game weekend non-conference series on Sunday at 1:05 p.m.

Fans can also follow this weekend’s Spartan baseball action through “Live Stats,” “Listen Live” and “Watch Live” links found at MSUSpartans.com. The games will be video streamed on BTN2Go, and will also be carried on the Spartan Sports Network live audio stream. The broadcast will be available exclusively at SpartanSportsNetwork.com and on the network’s 24/7 app for mobile devices (available on iTunes and Google Play). Broadcast veteran Scott Moore calls the action alongside former MSU manager/bullpen catcher David Greenberg in select games.

Any schedule updates will be announced on www.MSUSpartans.comand on twitter @statebaseball.