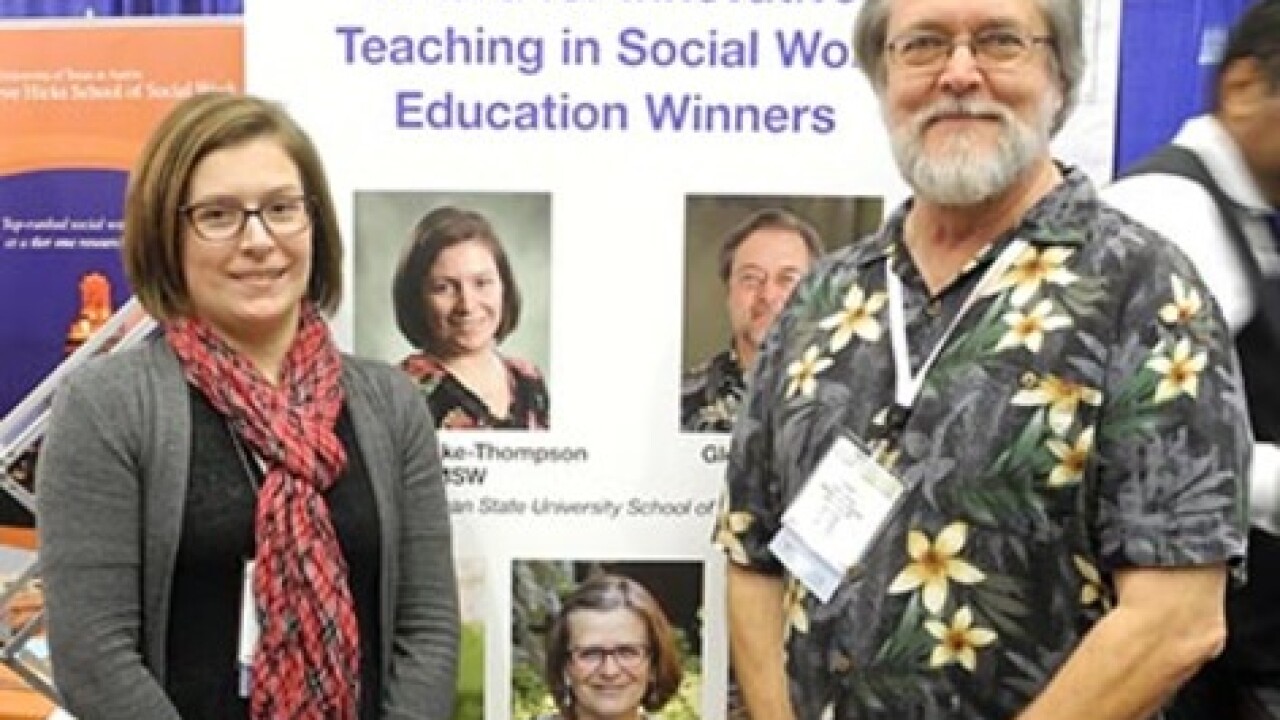 Tina Blaschke-Thompson and Glenn Stutzky are recipients of the 6th Annual SAGE/CSWE Award for Innovative Teaching in Social Work Education for their Combat Veterans class: Embracing the Stories of War.

Using an immersive storytelling approach, students in this two-credit online class follow post-9/11 and Vietnam combat veterans through the military cycle, from enlistment, basic training, the experience of war, to post-war challenges. The objectives of this class are to increase knowledge and deepen empathy for this marginalized and often misunderstood population.

In his introduction at the award ceremony, Josh Perigo with SAGE Publications stated, “I was really touched by what they did. They shed a little light on a subject that oftentimes is pushed into the dark. They took a very personal approach and they left everybody involved profoundly impacted with their project, 'Embracing the Stories of War.'”

This will be the first of three classes in a Social Work with Combat Veterans certificate program designed for MSW students who wish to work with this population. The second class, Sharing the Burden of War, will focus on the societal response to war and historical treatment of those returning from war, with an emphasis on improving policies and programs to better meet their needs. The third course, Healing the Wounds of War, will focus on intervention models that have shown to be effective in helping veterans overcome moral injury and the trauma of war.

In addition to taking these three courses, students in the certificate program will complete a specialized field placement related to military social work and participate in a specialized liaison group to support professional networking and address gaps in service provision through sharing ideas and resources.

According to the Department of Veterans Affairs (2016), 213 Michigan veterans committed suicide in 2014. The most suicides are among those from the Vietnam era, which is the largest group of veterans.

With at least 20 veterans committing suicide every day, the need for mental health professionals trained to work with this population has never been greater.

The certificate program will launch Summer 2018 and is open to students across the state. The School also plans to offer a post-graduate certificate option in the near future.