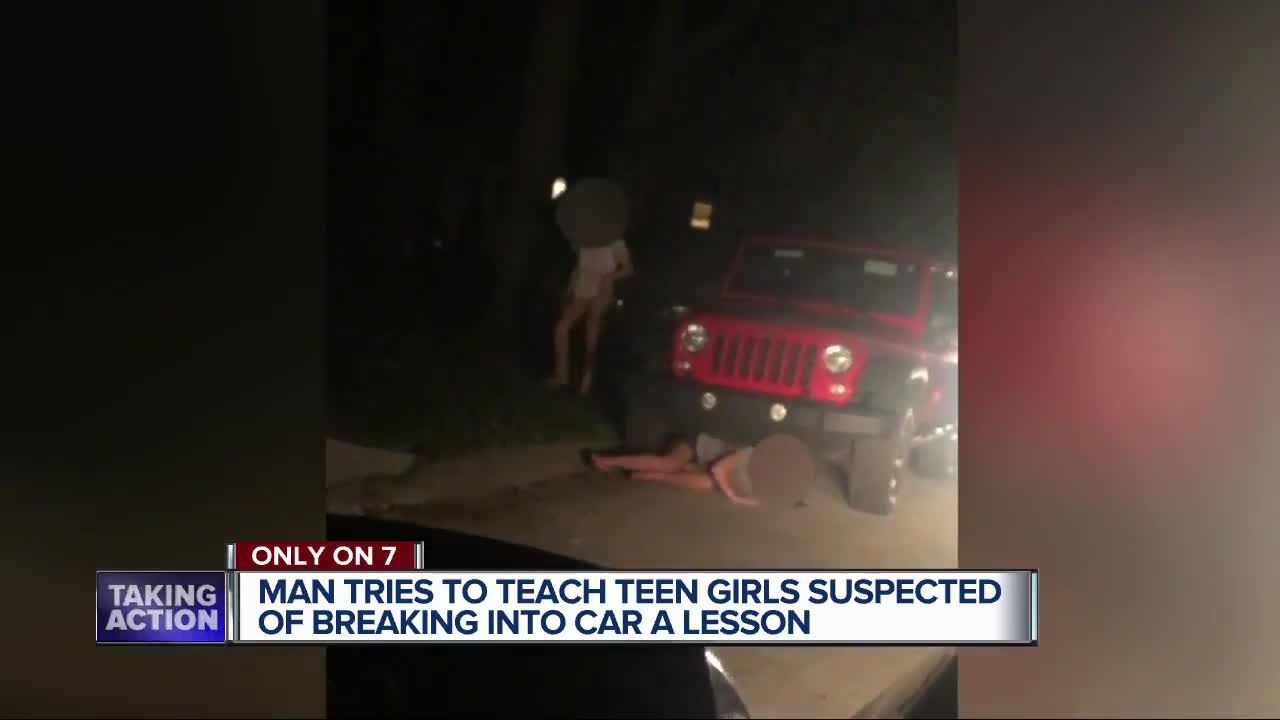 A man says he decided to teach two teen girls a lesson after he caught them breaking into cars.

"Bro, I'm sorry, bro," said one of the suspects, a girl believed to be about 13. "We won't do it again," she added, begging Marcellus Hogan not to call police after he caught the girl and another girl breaking into his girlfriend's car.

It was about 9:30 Thursday night near 5th Street and Alexander in Royal Oak when Marcellus walked out of his home and spotted the light on in his girlfriend's vehicle. He then saw the suspects run and jumped into his car to chase after them.

Marcellus drove up to the suspects and while recording video with his cell phone, spots one of the suspects trying to hide under a red Jeep Wrangler.

"I caught your (expletive) stealing," Marcellus yelled out of driver's side window to the girls as the one who tried to hide under the vehicle stood up and began walking toward him.

"We didn't steal anything," said one girl while her friend repeatedly apologized. "I'm sorry, bro."

One girl admitted they were checking to see if the vehicle was locked. "We opened it one inch," she said.

"I should call the cops," Marcellus told the girls who then begged him not to call police.

"The situation could have flipped very quickly," said Marcellus, a musical artist who goes by the name "6AAMM."

Marcellus said the girls could have made him out to be the bad guy and told police that he was following them around.

"And just based on the way I look," he said. "I could be a black guy who looks like Tiger Woods and they might give him a second chance. But I don't look like Tiger Woods. No telling what they would have thought."

Marcellus pointed out that he has dreads and a lot of tattoos.

He told the girls if he were the one who opened someone's car door, he'd be going to jail. And then he asked the girls if they were trying to go to jail by breaking into people cars.

They were just "being stupid," one girl replied.

Marcellus hopes his encounter with the girls will make them think before they do something so foolish again.

"Ya'll take your (expletive) home." he said. "Stay out of trouble."

Before they walked away, both girls said they learned a good lesson. And they both repeated, "I'm so sorry."

"Obviously, I'm a good guy," said Marcellus, hoping young people realize that if the wrong person catches them breaking the law or doing something wrong things may not end well.