THEN AND NOW: See how World Cup host Russia looked in Soviet times and how it has changed

They are images from what now seems like a different world, black and white glimpses into what was then the USSR.

In 1980, the Cold War was in full flow. The Soviet Union and NATO-allied countries led by the United States had vast nuclear arsenals, enough to destroy the world several times over, targeting each other.

At the Luzhniki Stadium that will host Sunday’s World Cup final, Lenin still looks haughtily over the crowds. In 1980, it hosted Olympic sports. That July, AP’s Boris Yurchenko photographed workers erecting an Olympic sign before the games opened. Use the slider to see the stadium then and now. The color photo, by John Leicester, shows fans gathering for one of the seven World Cup games played at what used to be called the Lenin Central Stadium. Renovated over four years for the World Cup, the tournament’s flagship venue now holds 78,000 people.

In Moscow, photographers for The Associated Press fanned out in July 1980 to record a milestone in sporting history: The hosting of the Olympic Games, hit by the biggest boycott in Olympic history. Some 60 nations, including the United States, stayed away to protest the Soviet Union’s invasion of Afghanistan.

Red Square, still instantly recognizable, doesn’t seem to have changed that much since 1980. But the way people look has changed. In black and white: Soviet street-sweepers photographed before the Olympics. In color, the square during the World Cup.

The Russian capital didn’t have the gleaming skyscrapers, fast-food restaurants and glitzy wealth of today.

But some things haven’t changed.

Off Red Square, in 1980 and now. It would have been impossible to imagine that July, as people strolled past flocks of pigeons, that The Associated Press would have a TV studio (on the left) overlooking the square, where broadcasters from around the world report to their audiences about the World Cup.

Had anyone back then, in the height of East-West tensions, said that future generations would party together on Red Square, that Russians and fans from around the world would celebrate a shared passion for soccer, they probably would have been thought of as crazy.

On July 23, 1980, young Soviet women waited outside Lenin Stadium for a rehearsal of Olympic opening ceremonies. At the World Cup, 38 years later, fans gathered to watch Portugal beat Morocco 1-0. Use the slider to see how the stadium has changed.

Whether, and by how much, the World Cup has helped change perceptions of Russia remains a subject of debate. Fans discovered welcoming Russians. But the football hasn’t made tensions disappear between the Kremlin and western governments.

Still, seeing Moscow’s transformation over 38 years, change of one sort or another seems inevitable in the future, too. 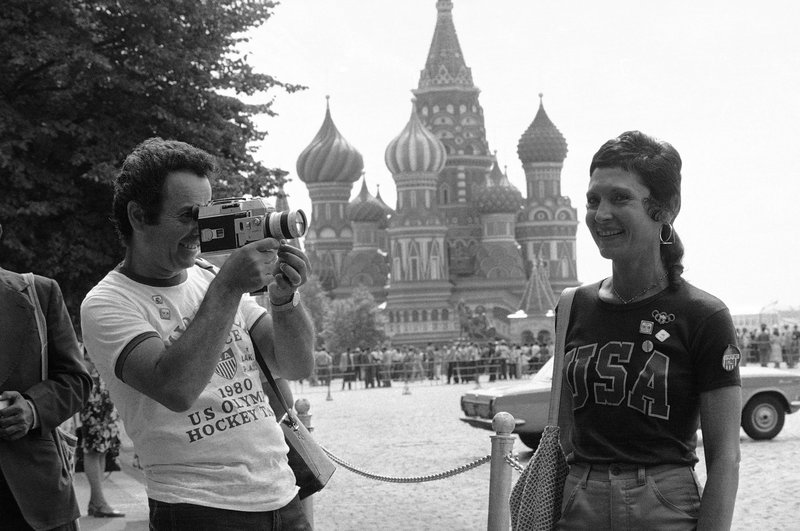 Maxim and Frida Sira of New York City posed in front of St. Basil’s Cathedral on Red Square on July 29, 1980. They came with a tourist group to watch the Olympic Games. At the World Cup, thousands of fans will be going home with selfies from Moscow and the 10 other host cities. (AP Photo)