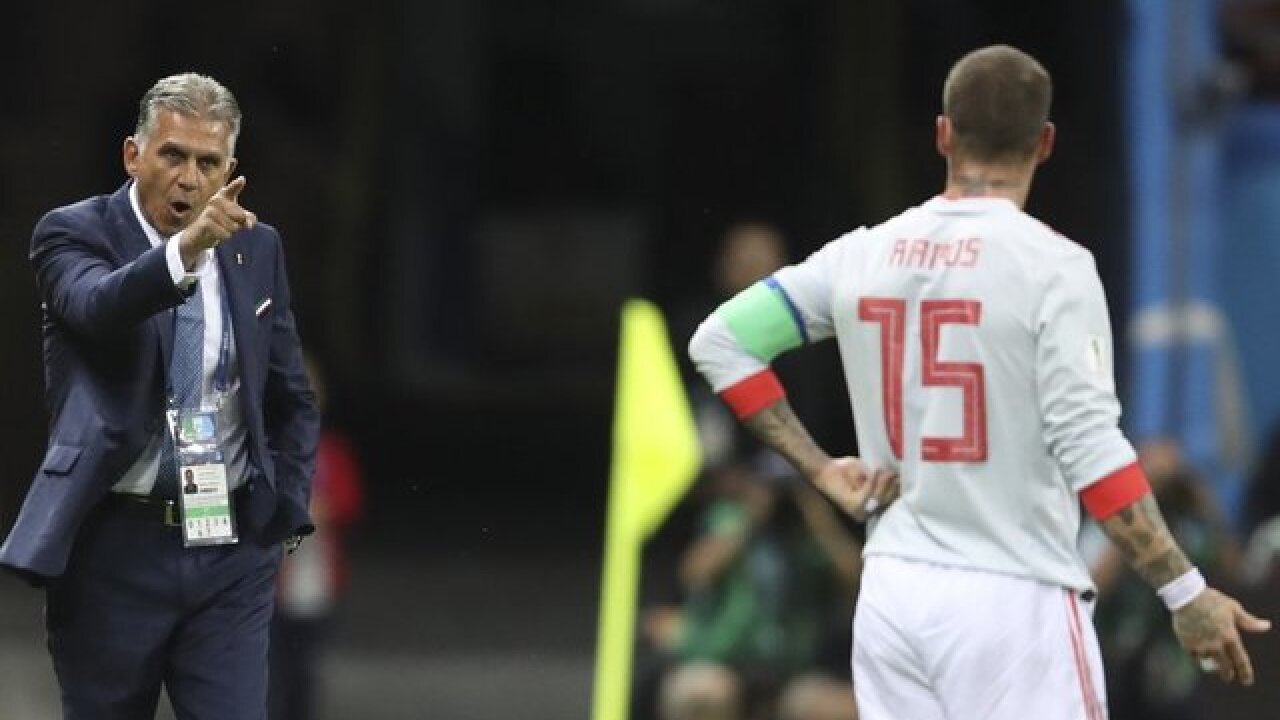 Win or lose, Spain’s outspoken central defenders aren’t wary of controversy. Not even at the World Cup.

Two matches into the tournament, Sergio Ramos and Gerard Pique have already attracted headlines for their unguarded comments in Russia.

Ramos had a spat with Diego Maradona and with Iran coach Carlos Queiroz. Pique was at odds with Barcelona, his club back in Spain.

Ramos didn’t hold back after finding out that the former Argentina great criticized him in a television interview.

“I respect Maradona. He was a great player,” Ramos said after the team’s 1-0 win over Iran on Wednesday. “But I also believe that in Argentine football everybody knows that Maradona is light years behind the country’s best player, who for me is (Lionel) Messi.”

Maradona had said he doesn’t see Ramos as a top player and instead prefers defenders like Uruguay’s Diego Godin, Ramos’ rival with Atletico Madrid in the Spanish league.

Ramos also answered criticism by Queiroz, who brought up Ramos’ clash with Egypt forward Mohammed Salah in the Champions League final after being told that Spain right back Dani Carvajal complained of Iran’s tactics.

The coach said Carvajal should look at what his teammate did to Salah before criticizing other teams.

“I’m not going to give importance to what he said,” said Ramos, who was involved in a challenge with Salah that forced the Liverpool player to leave the Champions League final with a shoulder injury that nearly kept him from making it to Russia.

Ramos and Queiroz had already exchanged a few words near the sidelines after Queiroz appeared to criticize Ramos for a hard foul on one of his players.

Pique, whose partnership with Ramos in defense has been key to Spain over the years, didn’t sidestep his ordeal with Barcelona back home.

The club publicly said it wasn’t happy with Pique after finding out his company produced the television documentary in which France forward Antoine Griezmann announced he would remain with Atletico Madrid instead of joining Barcelona after the World Cup.

Barcelona official Jordi Mestre said a day before Spain’s match against Iran that president Josep Bartomeu would talk to Pique to let him know that the club and its fans were surprised and unhappy about his involvement with Griezmann’s high-profile announcement.

“If they want to talk to me, they have my phone number and they know where the dressing room is,” Pique said. “They know how to find me. I’ll be happy to talk to them if they want to.”

Pique said he doesn’t feel he owes an apology to Barcelona because of the video, which he promoted to his nearly 19 million followers on Twitter on the day it was going to be broadcast in Spain.

After the national team’s 3-3 draw against Portugal in the World Cup opener, Pique had already made headlines by complaining about Cristiano Ronaldo and saying the Real Madrid forward was prone to diving.

Spain and Portugal are tied at the top of Group B with four points each, one more than Iran. Spain faces Morocco, which is already eliminated, in its final group game Monday in Kaliningrad.