FOX 47 is operating at reduced power. Your signal may be affected!
SportsWorld Cup Soccer

Caretaker Hierro leaving his mark on Spain at World Cup 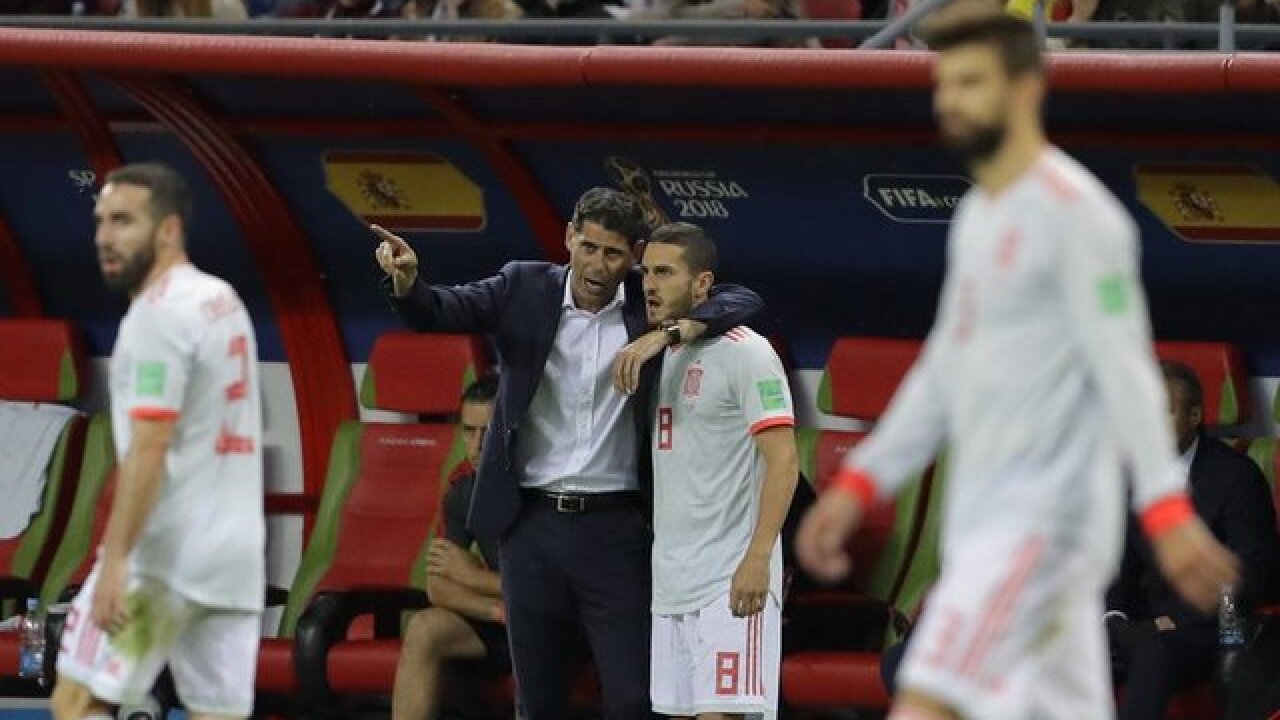 Fernando Hierro had an abrupt answer to those asking questions about his tactics and strategies at the World Cup.

“I’m the new coach. I’m the national coach,” the former Real Madrid captain said. “You have to get used to that.”

No doubt about that.

In just two matches in charge of the Spain squad at the World Cup as the last-minute successor of Julen Lopetegui, Hierro has already made his mark. And results have not been too bad, as Spain is level on points with Portugal for top spot in Group B and in an excellent position to qualify for the knockout stage.

Knowing his team would be facing a very defensive Iran team on Wednesday night, Hierro came up with a different formation to the one used for the 3-3 draw with Portugal last week.

“We understood it was very important to overman on the left,” Hierro said after Spain’s 1-0 win over Iran.

Hierro made two changes for the match, bringing in defender Dani Carvajal and winger Lucas Vazquez. Carvajal had just recovered from a muscle injury he picked up during the Champions League final, but Hierro thought the defender would make an excellent partnership with Vazquez to create space in Iran’s flat and well-organized defense.

“We needed to play deep on the right and have some space there for Lucas and Dani when they had to fight two against one,” Hierro explained. “It is true sometimes on the left they have changed the whole style of game, have changed their right flank. But, on Dani’s side, Lucas’s side, we created space and we were able to penetrate, able to get balance and that’s why we took this decision.”

Hierro also repositioned Isco on the left, and it proved to be a successful decision as the Real Madrid was dominant in the midfield. His relentless work to win the ball back and his dribbles also contributed to wear down the opposition on a frustrating night for Spain’s attacking players.

Hierro, a former Real Madrid star who spent 14 seasons at the Merengue club, has no major coaching experience before joining the national squad and it’s unclear whether he will remain at the helm of the national team after the World Cup.

The 50-year-old 50 Hierro has been Carlo Ancelotti’s assistant at Real Madrid and coached second-division club Real Oviedo two seasons ago. But he recently served as the Spanish federation’s sports director and was already in Russia with the national team when Lopetegui was fired.

He knows the Spanish internationals very well, and they all seem ready to listen to the new boss.

A majority of Spain players were reportedly in favor of Lopetegui staying on for the tournament after Spanish soccer federation president Luis Rubiales made the move to fire the coach.

Rubiales said Lopetegui had betrayed Spanish football values by accepting the coaching role at Real Madrid while still under contract with Spain. A little bit more than a week later, the players seem to have digested the shock decision pretty well. And in any case, they don’t give the impression they want to betray Hierro.

At the end of their warmup om Wednesday night, they linked arms in a big circle. And a few minutes before kickoff, there were scenes of solidarity between the starters as Sergio Ramos gave Andres Iniesta a kiss on the cheek and held his teammate’s head in the tunnel leading to the pitch.

“When I speak about my team, I speak about the 23 players,” Hierro said. “It’s a pleasure to see them, to get up in the morning and to see how committed they are. When you have players like mine, who are committed and fight, things look brighter.”

With a coach like that, things are looking bright for Spain, too.