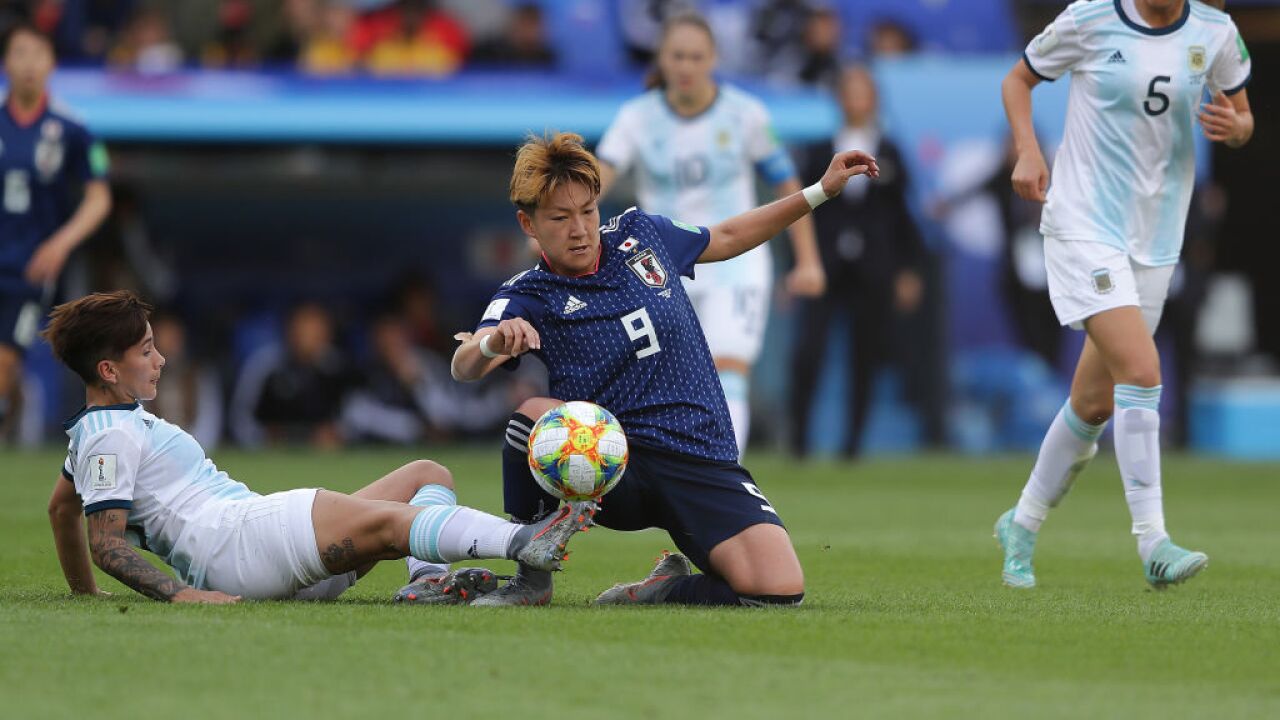 PARIS (AP) — At the final whistle of their Women's World Cup opener, Argentina's players dropped to their knees as if they'd won the entire tournament.

They didn't even win the game.

But for the first time ever, they didn't lose, either.

Argentina played to a 0-0 draw against Japan to earn its first ever point at the World Cup. Argentina lost its previous six World Cup matches in 2003 and 2007, and missed the 2011 and 2015 tournaments.

For a nation that loves the game and worships its globally successful men's team, the draw against Japan can be as good as a win. Argentina had been outscored 33-2 in six previous World Cup games.

"I think we can really inspire people a lot," said midfielder Estefania Banini. "We can also start a new process."

Argentina wants far more than points at the World Cup. The bigger goal is to touch more hearts and minds back home.

Borrello said he hopes for a push for equality between the men's and women's games — and also across Argentinian society as a whole.

"We have started getting support now from the Argentinean football federation for the team. It's true that results help a lot, and this will definitely help and reinforce all the work," he said. "It will help us to continue on the great path. We have to also strengthen the grassroots of our game."

Things are changing in Argentina .

Previous concerns about a lack of uniforms and inadequate training conditions have been addressed, two years after players went on strike because stipends went unpaid. A movement for equality pushed the country's soccer association into giving professional status to the national women's league. This coincided with the country's feminist movement taking to the streets with marches against violence and inequality.

Both national teams are in action this month — and maybe next month if they go far — with the men over in Brazil at the Copa America.

Before their respective departures, the two teams met.

Sharing a table were two No. 10's — Banini and five-time Golden Ball winner Lionel Messi, among the all-time greats of the game.

"We were together with Messi and the whole team, the men's and the women's teams," Borrello said. "We had a meal together before we left and were able to exchange together."

The 28-year-old Banini, who plays club soccer with Spanish side Levante, hopes this is just the start.

"We can become a national team that aspires to so much more," said Banini.

Next up is England on Friday, while Japan faces Scotland in the other Group D game.

Japan took until the 50th minute to test Correa, who stopped forward Kumi Yokoyama's low shot from about 35 meters out. Minutes later, Japan midfielder Yui Hasegawa botched a good chance, swiping left of the goal from close range after a cross from the right.

Correa then palmed away a low cross from the right in the last minute and dealt well with a corner kick deep into injury time.

Argentina was extremely organized. Japan, runner-up in 2015, was largely lackluster.

"We never look to play defensive football (but) in the first half we were very cautious," Japan coach Asako Takakura said. "We were not good enough to break down Argentina's defense today."

Takakura made it clear to her players how disappointed she was.

"The areas that have to be changed will be," she said.