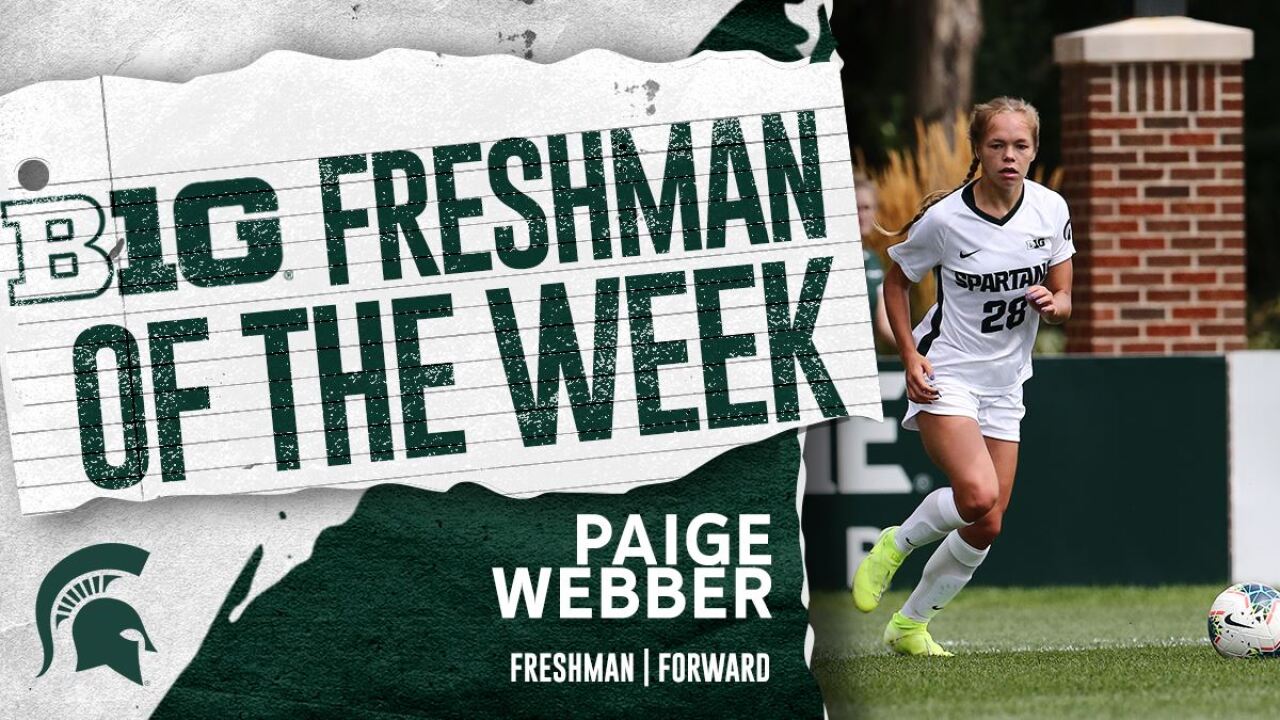 LANSING, Mich. — Michigan State freshman women's soccer player Paige Webber has been named Big Ten Freshman of the Week, as announced by the conference on Tuesday.

The Grand Blanc, Michigan native scored twice and tallied an assist in the team's victories over Bowling Green, 3-2, on Sept. 12 and a road win at Oakland, 2-0, on Sept. 15.

Webber, who is the only freshman to earn starts in all eight games this season, is third on the team in points (8) and goals (3) and is tied for second with one game-winning goal.

Through the team's eight games this season, Webber has two game-tying goals to force overtime and a game-winning goal.

Against Bowling Green, Webber scored the game-tying goal in the 80th minute to even the score at 2-2 and force the team's second overtime game of the season. The Spartans went on to defeat the Falcons in overtime, 3-2.

Webber also scored the game-tying goal at Boston University on Sept. 1, which resulted in a 2-1 double overtime win for Michigan State.

In the 17th minute at Oakland, the forward got the Spartans on the board first, with what would end up being the game-winner. Webber also assisted on Camryn Evans' goal late in the second-half to ensure a 2-0 Spartan win on the road.

Hannah Drkulec (Iowa) and Sarah Stratigakis (Michigan) were named co-offensive players of the week, while Maryland defender Malikae Dayes earned defensive player of the week honors. Hillary Beall of Michigan was tabbed as goalkeeper of the week.

UP NEXT: The Spartans begin Big Ten play next week on the road with matchups at Ohio State and at No. 23 Penn State. MSU will travel to Columbus, Ohio for the Big Ten opener on Thursday, Sept. 19 at 8 p.m., in a game that will be televised nationally on the Big Ten Network. MSU will face the No. 23-ranked Nittany Lions to close the opening week of conference play on Sunday, Sept. 22 at 1 p.m.