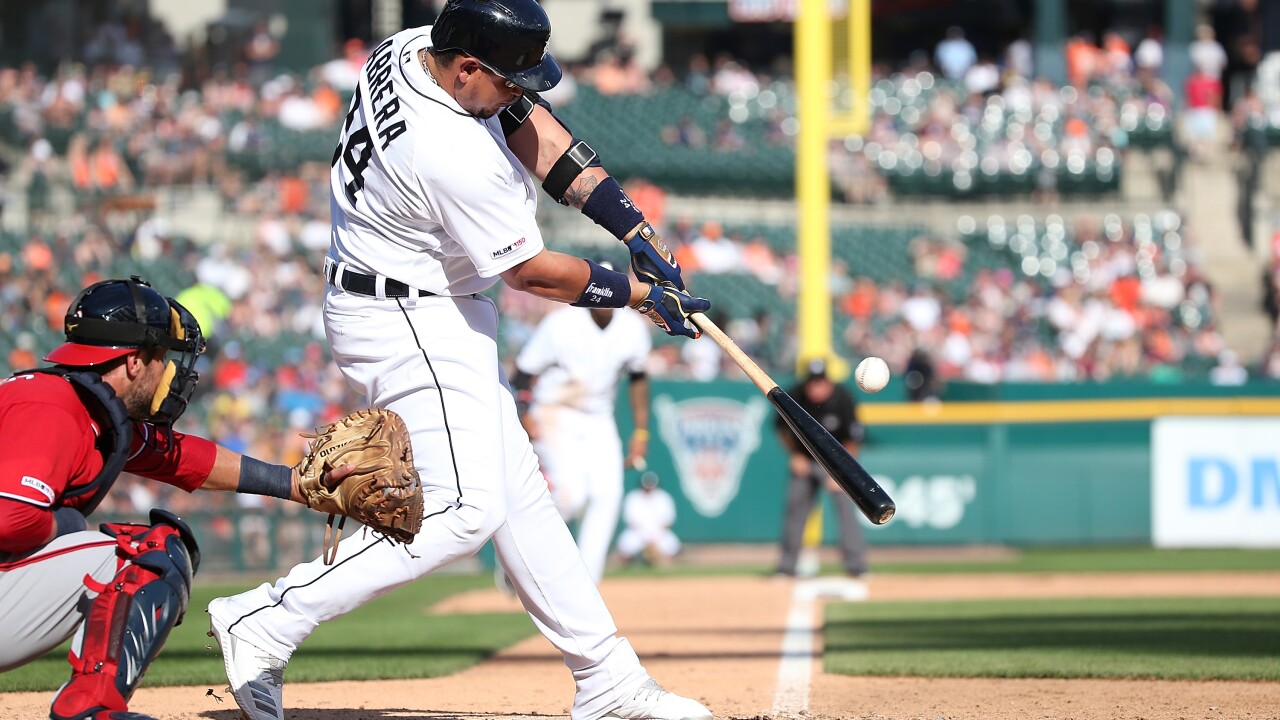 Jones went up over the wall in left field to bring back a blast by Victor Robles, keying the Tigers' 7-5 win over the Washington Nationals on Saturday.

"I just put my foot on the wall and jumped in the air," Jones said. "It's one of the best feelings. It's kind of like hitting a home run in a clutch situation. It's kind of better honestly, just gets everybody hyped, gets the energy going, gets the crowd into it.

"It's just a fun moment when you make a play like that."

Miguel Cabrera had three hits and three RBIs as the Tigers rallied twice in their third win in 24 games at Comerica Park.

Joe Jimenez struck out two batters in a scoreless eighth, and Shane Greene added two more in the ninth to earn his 22nd save in 23 chances.

"Everybody took the ball and did what they had to do against a playoff-caliber team," said Tigers bench coach Steve Liddle, who filled in after Ron Gardenhire was ejected.

Anthony Rendon included a homer among his three hits for the Nationals, who had a four-game winning streak halted.

Jones' catch highlighted the Detroit defense, and Nicholas Castellanos added a catch while running at full speed in the first inning. Shortstop Niko Goodrum made a stop in the hole and first baseman Ronny Rodriguez did the splits to get an out in the second.

Washington right-hander Austin Voth outlasted Soto in a meeting of pitchers making their sixth career appearance in the majors.

But Voth could not get out of the fifth inning, allowing three runs and striking out three. Detroit rookie starter Gregory Soto was pulled in the fourth after giving up three runs with one strikeout.

"His breaking pitches were just outside the zone and they weren't swinging at them," Nationals manager Dave Martinez said. "He competed. He just didn't have his command."

Tanner Rainey (1-3) took the loss after facing three batters in the seventh. He walked two and allowed a single.

"Anytime you give them two free bases, you're putting yourself in a terrible situation," Rainey said.

Nationals: Manager Dave Martinez said Ryan Zimmerman, reinstated Friday from the injured list, and other everyday players have been instructed to not go all-out every single play.

"There's times where I tell them, a base hit is a base hit," Martinez said. "It's not only just 162 games, it's everything that goes with it. The traveling, the up and downs, the day games, the night games. There's a lot involved. When these guys got to get up every day and play every day, you got to figure out ways to be smart about what you do."

Zimmerman is recovering from plantar fasciitis in his right foot.

Tigers: Jones returned to the lineup after sitting out a game because he fouled a ball off his foot on Thursday.

Reliever Jonny Venters made his debut for the Nationals, striking out three batters in 1 2/3 innings.

He signed a minor league deal in May after being released by Atlanta. Venters' return from his third Tommy John surgery helped him win the NL Comeback Player of the Year Award last year.

Gardenhire was ejected after Brian Dozier's double in the fourth inning. The ejection, which came after a close call on the previous Soto pitch that would have ended the inning, if it were called a strike, was Gardenhire's seventh of the season.

"That was something I really, really appreciated," Soto said about the ejection, through a translator.

Martinez said Gardenhire is "the Bobby Cox of our era," a nod to the former Braves skipper, who has the all-time lead in ejections with 158.

Gardenhire has been ejected 82 times in his career.

Added Liddle: "When you look up a player's manager in the dictionary, it's his picture there. That's just how he is, and that's just what's going to happen.

"I think the players respond to that."

The Tigers announced the signing of former St. Louis closer Trevor Rosenthal to a minor-league deal on Saturday.

The hard-throwing right-hander pitched 12 games this season with Washington, posting a 22.74 ERA. He missed the 2018 season after undergoing Tommy John surgery on his elbow.

The 29-year-old Rosenthal had 121 saves in six seasons with the Cardinals and will be assigned to Triple-A Toledo.

The Tigers celebrated the 1984 World Series championship team on the 35th anniversary of the title in a pre-game celebration.

Nationals: RHP Max Scherzer (7-5, 2.52 ERA) will pitch in Comerica Park for the first time since leaving the Tigers as a free agent after the 2014 season.

Tigers: RHP Jordan Zimmermann (0-5, 5.95) will face his former team for the second time since leaving the Nationals after the 2015 season.