Tigers lose to Athletics for first 100-loss season since 2003 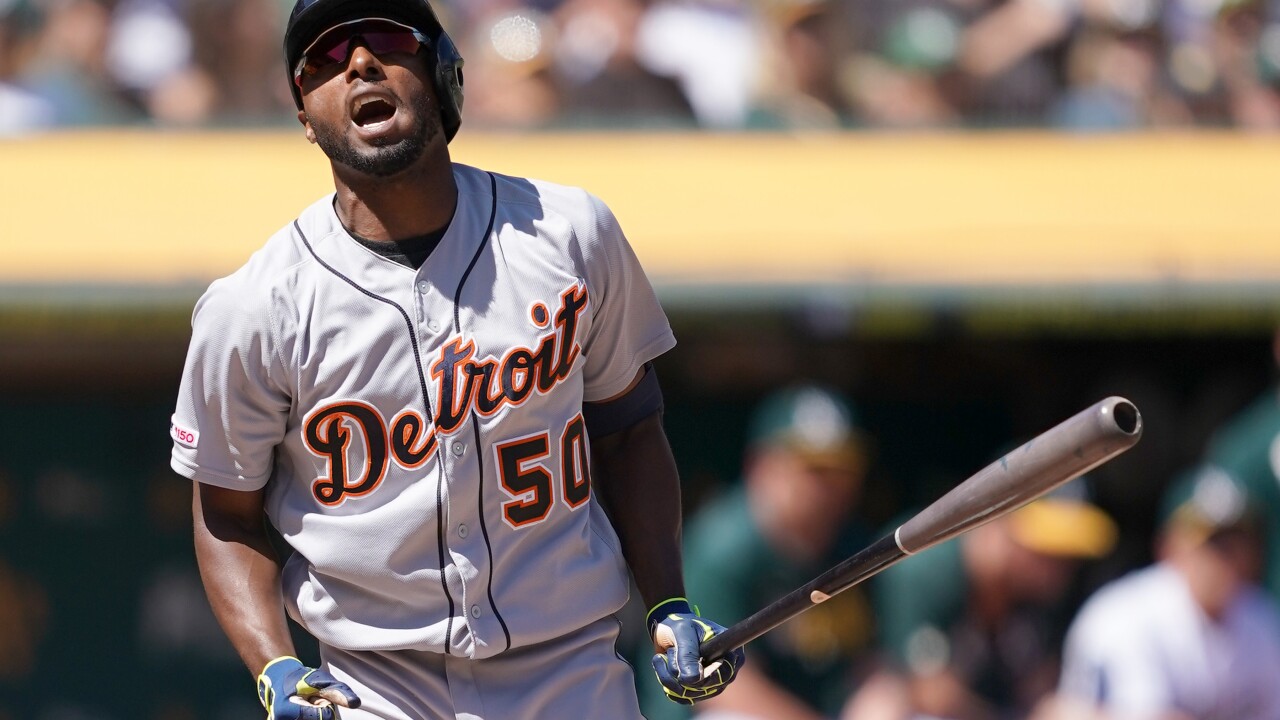 OAKLAND, Calif. (AP) -- Sean Manaea realizes he will need time to regain arm strength. Until he does, he is comfortable relying on a deceptive delivery and sneaky fastball.

Manaea matched his career high by striking out 10 in his second start following shoulder surgery, and the Oakland Athletics beat Detroit 3-1 on Sunday to give the Tigers their first 100-loss season since 2003.

"I'm trying to throw hard again but if it's not there, it's more about the conviction that I have with my pitches," Manaea said. "I got a couple swings and misses with 89 mph. If that's what it takes then that's what I've got. I can't be greedy and be upset that I'm not throwing 95, 97. I'm just working with what I've got."

He allowed two hits over seven innings against the Tigers, who didn't get a hit until Christian Stewart homered leading off the fifth. The 27-year-old left-hander struck out seven of his first 11 batters, including Dawel Lugo to end the first after back-to-back walks by Jeimer Candelario and Ronny Rodriguez.

Manaea worked around a leadoff double in the sixth, then needed just six pitches to work through the seventh. He has a 0.75 ERA after two starts.

"I've never seen anyone throw a fastball like his, up and out the zone, that gets so many swings," A's catcher Josh Phegley said. "He feels that he can blow his 90 mph by anybody so he's like, `I'm just going to throw it in the zone.' That's what he does. He forces teams to swing the bat."

Khris Davis had a two-run double for Oakland, which remained one game behind Tampa Bay for the top AL wild card and 1 1/2 games ahead of Cleveland for the second wild card.

"It looks like it's going to take 95 (wins) to get in," A's manager Bob Melvin said. "It's pretty strong and top-heavy. You don't want to get bogged down with how many you think you need to win. You just try to win every day and count them up at the end."

"We don't try to use any excuses around here. Everybody's got to step up, but as long as they're playing the game like they're playing and giving everything they have, the 100 losses means absolutely nothing to me," Tigers manager Ron Gardenhire said.

Yusmeiro Petit pitched around a walk in the eighth and Liam Hendriks threw a perfect ninth for his 19th save in 24 chances, completing a two-hitter.

Oakland won six of seven games against Detroit this season.

Semien doubled and scored on Mark Canha's groundout in the first, and Davis stopped an 0-for-19 slide in the fourth with a double off Drew VerHagenth.

Detroit starter Daniel Norris (3-12) was removed after three innings for his sixth straight start, part of the Tigers' plan to limit his workload.

Within minutes following the final out workers from the Oakland Coliseum descended onto the field to begin changing to a football configuration for Monday night's game between the Raiders and Denver Broncos. This is the final season the A's will share the venue with the Raiders, the last dual MLB-NFL stadium.

Athletics: Ramon Laureano was given a planned day off. Laureano came out of Saturday's game with cramps in his right leg, one day after coming off the injured list.

Athletics: RHP Mike Fiers (14-3, 3.51) has won a career-high 12 straight decisions heading into Monday's start against AL West-leading Houston. That's one shy of the Oakland record set by Hall of Famer Catfish Hunter in 1973.