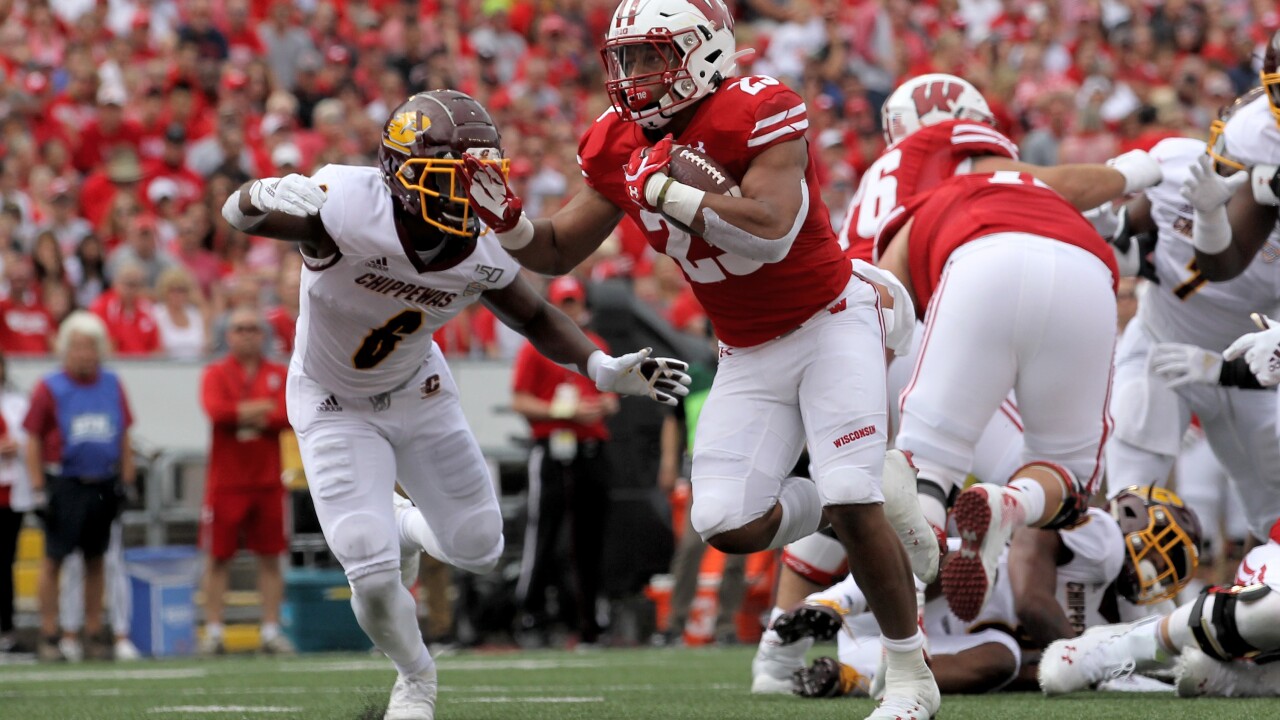 MADISON, Wis. (AP) -- Jonathan Taylor rushed for three touchdowns and caught another, Quintez Cephus scored his first two touchdowns of the season and No. 17 Wisconsin cruised past Central Michigan 61-0 in its home opener Saturday.

"I wish we could have played better, but it is what it is," first-year Central Michigan coach Jim McElwain said.

Cephus finished with six receptions for 130 yards -- both career highs -- and tied a career high with his two scores.

The junior receiver did not play last year after being expelled from school following sexual assault charges. He was acquitted by a jury last month, reinstated by school officials and was ruled academically eligible for last week's opener at South Florida. Cephus had three catches for 39 yards in the Badgers' 49-0 victory last week.

"I've worked hard to get back here," Cephus said. "I'm just very thankful for the plans that God has had for me, and I'm just living as His son and trusting everything that He has come for."

Taylor had 102 yards on the ground, surpassing the 100-yard rushing mark for the 24th time in 29 career games. The 2018 Doak Walker Award winner also had his third receiving score of the season after having none in his first two seasons with the Badgers.

"He is well-deserving to be in that Heisman race," McElwain said of Taylor. "I really like the way he plays the game. I think he's a good player, and people in the Big Ten are going to have to wrap him up."

Badgers wide receiver Kendric Pryor left the game with an upper-body injury and did not return.

After missing Cephus on two deep throws last week in the season opener, junior quarterback Jack Coan found the receiver for a 36-yard score and a 46-yard strike on Saturday. Coan finished 26 of 33 passing with 363 yards and three touchdowns. He had zero turnovers for a Wisconsin offense that has found a nice rhythm heading into a bye week.

"I think we're going to look back and see things we improved on, and we will have plenty of stuff to work on over the bye week, but Jack did do some good things," Wisconsin coach Paul Chryst said. "Defensively, there was a lot, but we will still have a lot to work on."

Central Michigan struggled to get anything going offensively a week after defeating Albany 38-21. Senior running back Jonathan Ward, who ran for 158 yards and two scores last week, went to the locker room early and did not return.

Minimal. The Badgers were a 35-point favorite against the Chippewas, who won just one game a season ago. Wisconsin improved to 17-2 in regular-season nonconference games under coach Paul Chryst.

Central Michigan: Hosts Akron in its Mid-American opener on Sept. 14.

Wisconsin: Opens Big Ten play against No. 7 Michigan on Sept. 21 at home.