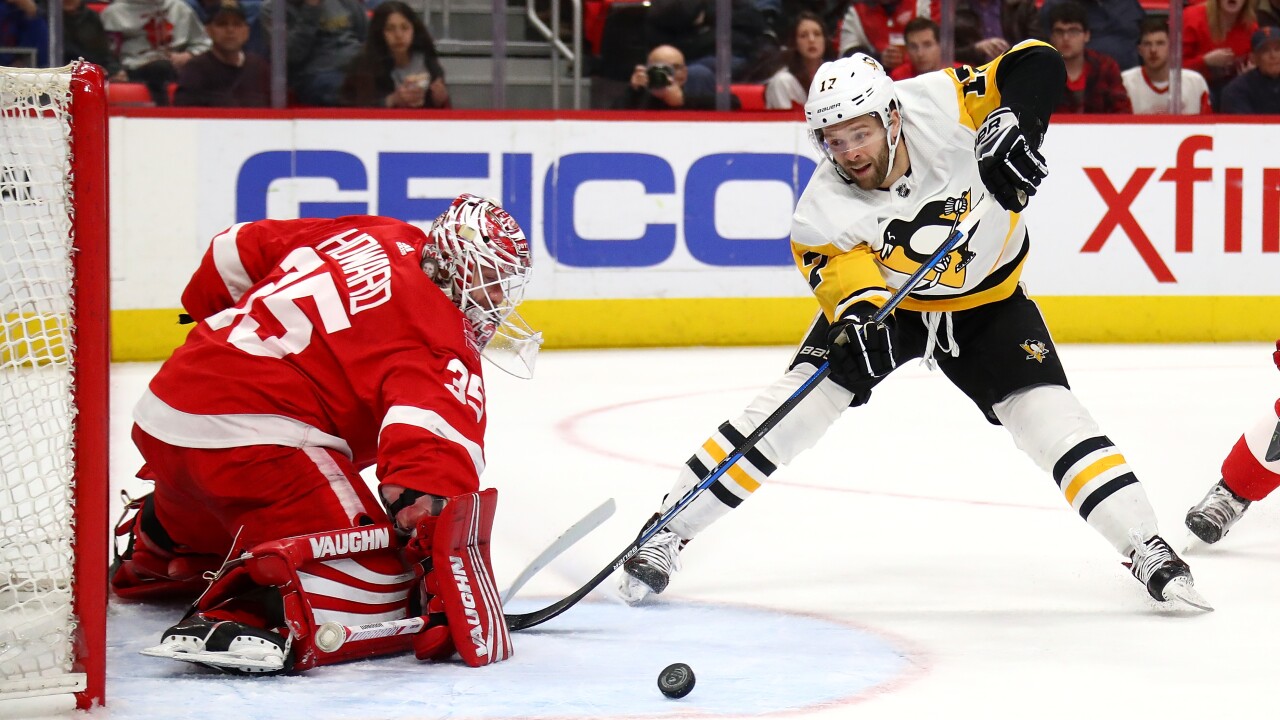 The Pittsburgh Penguins can lock up a playoff spot on Tuesday. The most direct way would be a victory over the lottery-bound Detroit Red Wings, but that's not as easy as it sounds.

The Wings (31-38-10, 72 points) have won a season-high five consecutive games and will try to delay Pittsburgh's celebration at Little Caesars Arena.

The Penguins (43-25-11, 97 points), who have three games remaining, sit in third place in the Metropolitan Division. A victory in Detroit or a Montreal loss to Tampa Bay would ensure that Pittsburgh reaches the playoffs for the 13th consecutive season, the longest active streak in the NHL.

"I think we still have some really good opportunities in front of us," Pittsburgh coach Mike Sullivan said. "Until that regular season is over, we've got to continue to grab points. We've got to make the playoffs first and foremost. Then we can look at the opportunities beyond."

Sullivan's club is nearly as hot as Detroit, with four victories in its last five outings. Pittsburgh got a strong contribution from its fourth line in a 3-1 home win over Carolina on Sunday, as Garrett Wilson and Matt Cullen scored.

"It's huge," Adam Johnson, the other member of the line, told the team's website. "Obviously we have those top guys that score a lot of goals. Any time we can pitch in, it helps a lot. It showed tonight that it helped the team win."

Tuesday's game is the front end of a home-and-home set with the Wings. Pittsburgh will host Detroit on Thursday, then close out the season with another home game against the New York Rangers on Saturday.

The Wings extended their current streak by scoring four third-period goals in a 6-3 victory over Boston on Sunday. Anthony Mantha notched his first hat trick in 214 career games during a five-point night. Taro Hirose scored his first NHL goal early in the third period, which proved to be the game-winner.

All of Mantha's goals were one-timers. He has 12 points during the winning streak, with linemates Tyler Bertuzzi and Dylan Larkin contributing 10 and eight, respectively, over that span.

"There's a lot of nights I was the opposite this year. (Sunday), it was going well for me, for our line," Mantha said. "Hopefully it keeps going that way. It's just having fun right now, trying to build chemistry for next year. I think we're doing the right things, keeping it simple and finding each other on the ice."

The Wings have been using patchwork lineups. They had 10 players listed as out due to injuries on Sunday and lost another when defenseman Danny DeKeysersuffered a lower-body ailment and couldn't finish the game. DeKeyser will not play Tuesday.

Some of their fans would prefer to see them stumble to the finish and improve their lottery chances. Coach Jeff Blashill said those fans should instead be pleased by how well their youth movement is going.

"I'd be way more concerned as a fan base if our young guys weren't able to go head to head against the elite players in the league," Blashill said. "The fact that our young players are the ones that are driving this winning streak should temper some of those concerns. These are the guys that are going to make the impact sooner than anybody we draft."