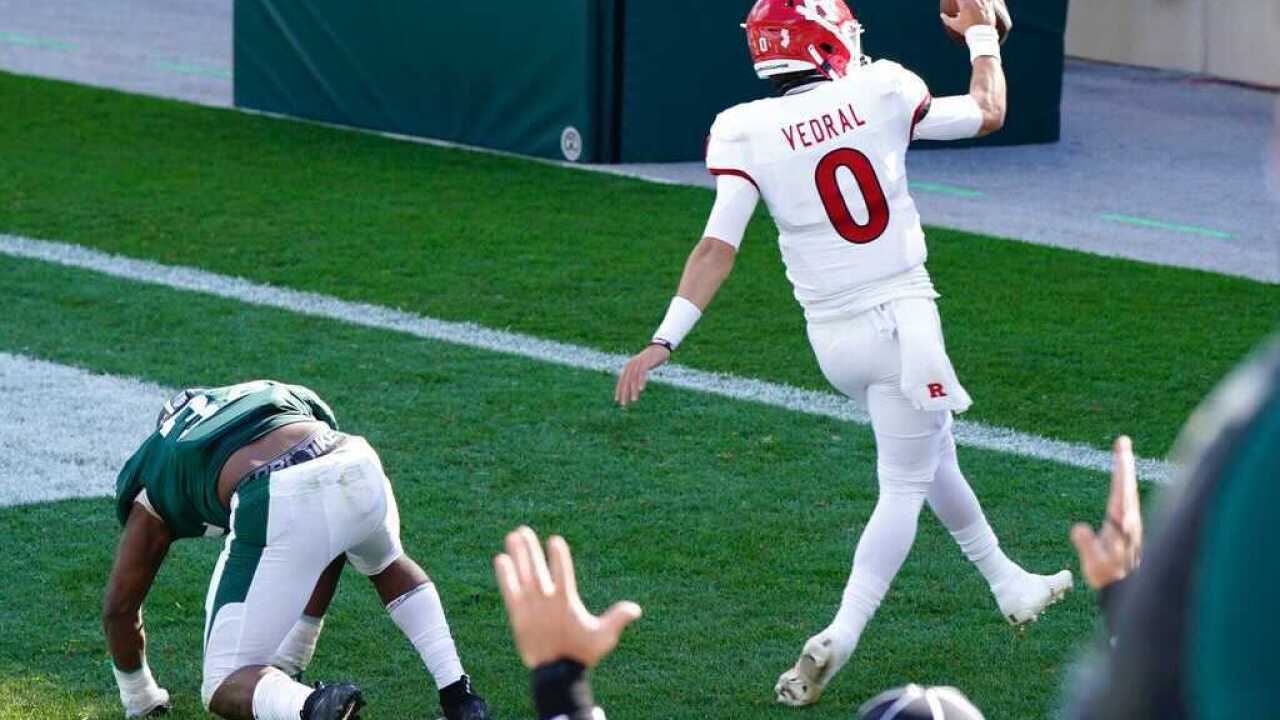 Michigan State has a new coach too, and Mel Tucker's debut was forgettable from the start. The Spartans (0-1) turned the ball over seven times — four in the first half — and never led against a Rutgers team that hadn't won a conference game since Nov. 4, 2017 against Maryland.

The Scarlet Knights scored 14 points total through their first five Big Ten games last year. It took them 8:03 to reach that mark Saturday. Pacheco strolled in from 12 yards out to cap the game's opening drive, then Michigan State receiver Jayden Reed fumbled the ball away on his team's first offensive play.

Rutgers (1-0) didn't capitalize on that turnover, but the Scarlet Knights quickly forced another. Rocky Lombardi was sacked and fumbled, giving Rutgers the ball at the Michigan State 1. A touchdown run by Johnny Langan made it 14-0.

Reed scored on a 50-yard catch-and-run on fourth down to make it 14-7, but the Spartans weren't done turning the ball over. An interception in Michigan State territory led to a 24-yard touchdown run by Rutgers quarterback Noah Vedral.

Reed's second fumble of the half gave the Scarlet Knights the ball again, but Vedral threw an interception. Michigan State's Shakur Brown ran it back for a touchdown, but that was called back for a penalty and the Spartans settled for a field goal.

Pacheco scored on a 3-yard run in the final minute of the half, and Rutgers led 28-13 after two quarters. Michigan State lost another fumble near midfield on its first possession of the third.

Rutgers lost two fumbles in its own territory in the third quarter. Lombardi threw a 30-yard touchdown pass to Jalen Nailor to make it 28-20, but the Spartans didn't capitalize on the second of those takeaways, getting stopped on fourth down from the Rutgers 21.

The Scarlet Knights drove the other way for a field goal that gave them an 11-point lead. Another Michigan State fumble — a muffed punt with 6:57 left — essentially sealed the game, although the teams traded late touchdowns after that and Lombardi threw an interception in the final minute.

Schiano is back for a second stint as the Rutgers coach after spending 11 seasons there from 2001-11. Tucker took over Michigan State after Mark Dantonio, the winningest coach in school history, retired this offseason.

Dantonio was on hand for Saturday's game, but it's clear his former team has a lot of work to do. Michigan State's streak of 21 straight wins in home openers came to an end, and that may be the least of the Spartans' concerns at the moment.

Rutgers: The Scarlet Knights had plenty of help from Michigan State's sloppiness, but for a program that hasn't won much recently, this victory should be quite a confidence boost.

Michigan State: The Spartans were mediocre for the previous two seasons and changed coaches in February. Then the pandemic limited what they could do in the offseason. A slow start wasn't much of a surprise, and even beyond all the turnovers, Michigan State looked disorganized on some key plays.

Michigan State: The Spartans have a lot of improving to do heading into next weekend's matchup — on the road against rival Michigan.