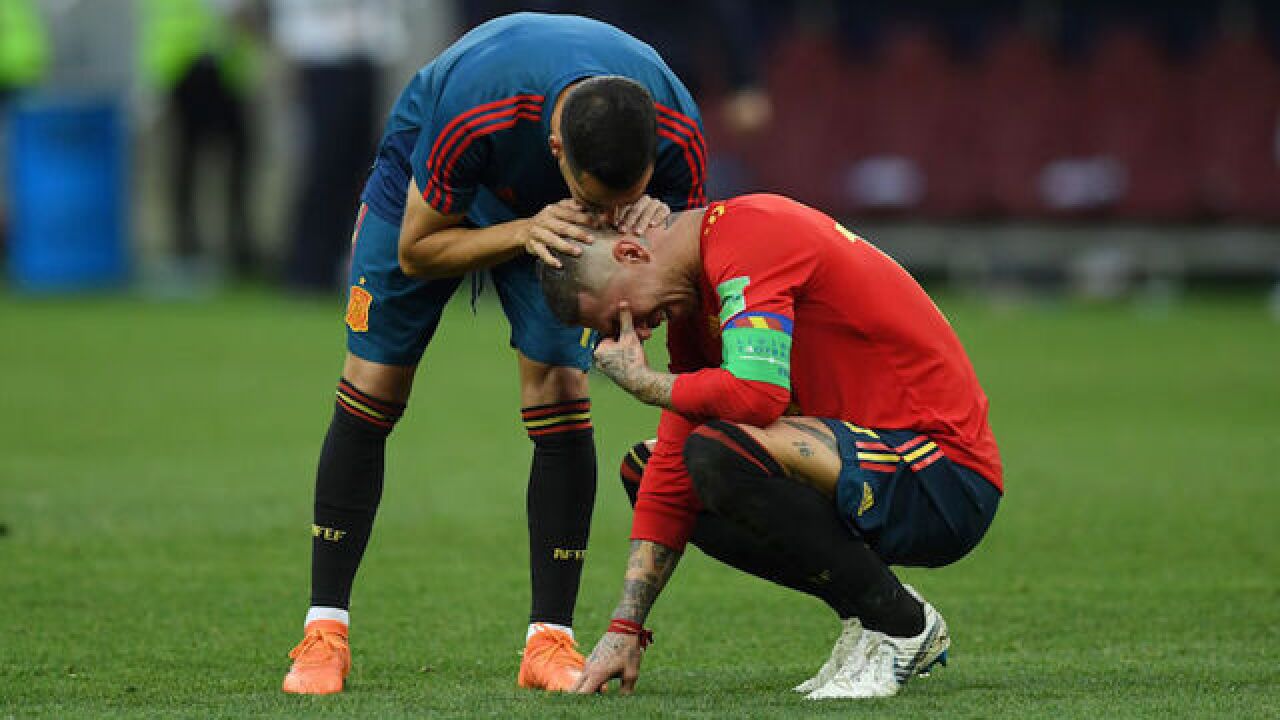 Image copyright 2018 Getty Images. All rights reserved. This material may not be published, broadcast, rewritten, or redistributed.
Matthias Hangst
<p>Sergio Ramos of Spain is consoled during the 2018 FIFA World Cup Russia Round of 16 match between Spain and Russia at Luzhniki Stadium on July 1, 2018 in Moscow, Russia. </p>

Russia sensationally knocked Spain out of the World Cup after coming out on top of a knee-knocking penalty shootout.

Missed penalties from Koke and Iago Aspas ensured Russia progressed to the last eight for the first time in its history, sparking joyous celebrations at Moscow's Luzhniki Stadium.

For all its possession and territory, the former world champion was far from convincing against a disciplined Russian side.

Arten Dzyuba's penalty before the break negated Sergey Ignashevich's 12th-minute own goal and from there on in the Russians refused to cave, forcing the match into a penalty shootout after it had ended 1-1 following 120 minutes of play.

The lowest-ranked team coming into this tournament and considered by some as the worst side in the country's history, the Russians surprised many by not only reaching the last 16 but doing so comfortably, steamrolling Saudi Arabia and Egypt and scoring eight goals in three games.

Striker Dzyuba had described Sunday's last-16 encounter as a "match of a lifetime" and spoke of how the players needed to "die on the pitch" to have a chance of overcoming the 2010 World Champions.

Buoyed by a partisan crowed, the home team gave it their all and there were tired Russian bodies aplenty after a stubborn defensive display took the tie to extra time and penalties.

In the end, it was another astonishing result in a competition which has seen Germany, Argentina and also Portugal depart already and increases the likelihood of a first-time winner lifting the trophy.

At times, it seemed as if the Russians were going to be killed by a hundred passes as La Rojo displayed a mastery of the ball for which the two-time European champion is renowned. By the end of the match the Spaniards had completed over a 1000 passes.

But despite being blessed with a wealth of talent Spain has also failed to overwhelm opponents in this tournament, drawing with Portugal and Morocco in the group stage.

The Spaniards went ahead in the 12th minute when Ignashevich backheeled the ball into his own net while attempting to rugby tackle Sergio Ramos to the ground as Marco Aesnsio guided a freekick towards the far post.

Falling behind so early seemed to signal the beginning of the end for a Russian team playing five men in defense, but despite being starved of possession the Russians hit back before the break.

Gerard Pique, beaten in the air by Dzyuba, stuck his arm up as the Russian headed towards the goal and the referee needed little time in awarding a penalty for handball.

Dzyuba converted from the spot and it proved to be a costly mistake from the Barcelona defender as the rest of the match turned into defense versus attack with Russia's defenders, ultimately, coming out on top.