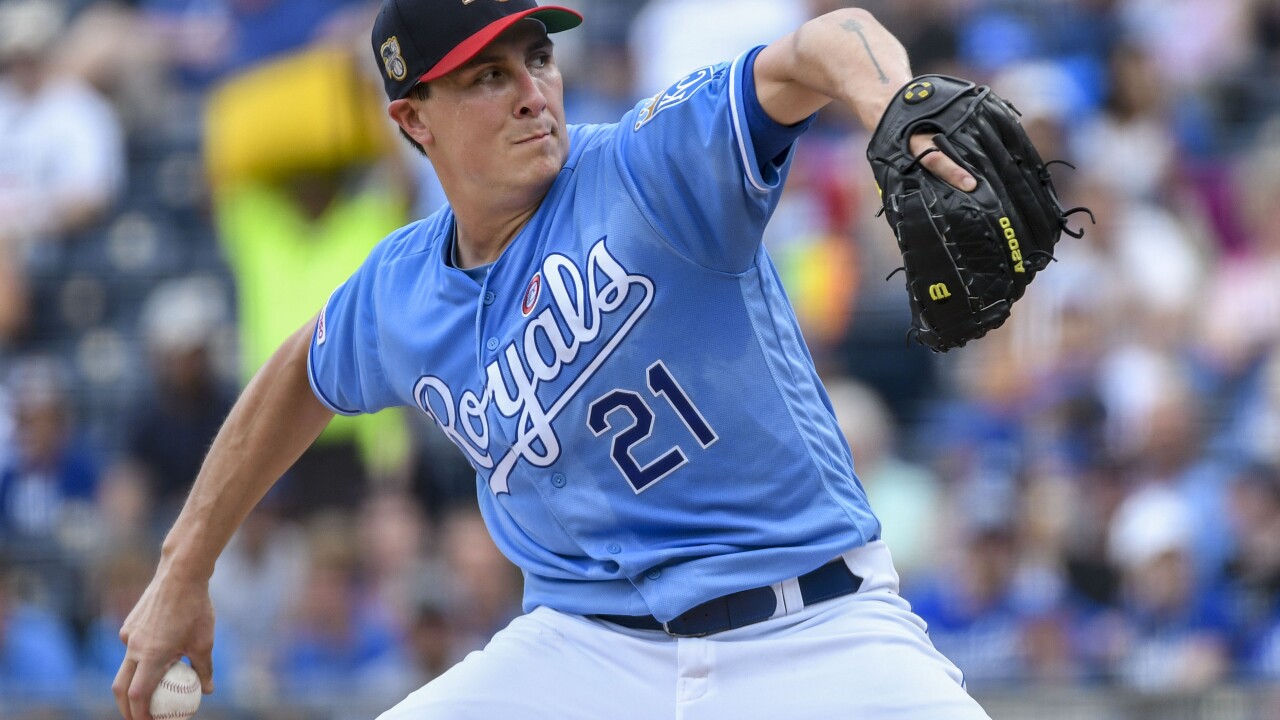 KANSAS CITY, Mo. (AP) -- The Kansas City Royals traded Homer Bailey to the Oakland Athletics for minor league infielder Kevin Merrell on Sunday after scratching the veteran right-hander about 45 minutes before his scheduled start of their series finale against Detroit.

The 33-year-old Bailey has rebounded this season with the Royals after signing a minor league deal in February. He is 7-6 with a 4.80 ERA, but he's been especially good over his past seven starts, giving the A's some additional help as they seek a playoff run in the second half.

The A's began the day six back in the AL West and just ahead of Cleveland for a wild-card spot.

"We're trying to get incrementally better wherever we can," Oakland manager Bob Melvin said "Before he got hurt obviously was an electric arm and it seems like he's coming back to form at this point. I think it makes our rotation better and that's the objective."

Bailey joins a rotation that has been battered by numerous injuries and a suspension to nine-game winner Frankie Montas.

Montas had a 2.70 ERA in 13 starts but was suspended 80 games by Major League Baseball after testing positive for a performance-enhancing substance. Montas is eligible to return for the final week of the regular season but not the postseason.

Sean Manaea and Jharel Cotton, both on the mend from offseason surgeries, have struggled in rehab starts, pushing back their timetable to return. Top prospect Jesus Luzardo has also been slowed by a Grade 2 strain in his left lat.

"Our starting depth has taken a hit obviously," A's general manager David Forst said. "I had let Kansas City know a fee days ago that Homer might be someone we were interested in. It kind of came together quickly actually this morning."

The rebuilding Royals signed Bailey with the intention of flipping him ahead of the July 31 trade deadline, and he is almost certainly the start of several transactions.

Royals general manager Dayton Moore has made it known that only a select few players, such as infielders Whit Merrifield and Adalberto Mondesi, are unavailable as contenders begin to come calling.

The former first-round pick was traded to the Dodgers as part of a seven-player deal that included Yasiel Puig and Matt Kemp in December, which means Los Angeles was paying the majority of the $23 million that remained on the $105 million, six-year contract he signed with the Reds in 2014.

Bailey struggled through the first six weeks of the season, but he's 3-1 with a 3.35 ERA and 37 strikeouts over his past eight starts. He also has shown that the health issues that plagued him for a long stretch in Cincinnati are firmly behind him -- he was due to make his 19th start on Sunday.

Melvin said Bailey will make his A's debut Wednesday afternoon in a home game against Seattle.

Left-hander Brian Flynn was given the assignment against Detroit in his place.

The 23-year-old Merrell was the 33rd overall pick out of South Florida by the A's in the 2017 first-year player draft. The speedy, defensive-minded infielder shot through three levels of the minors last season, and was hitting .246 with two homers and 34 RBIs in 82 games at Double-A Midland.

The left-handed hitter will not join the Royals' 40-man roster, instead going to their own affiliate at Northwest Arkansas. That leaves Kansas City with 39 players on their big league roster.