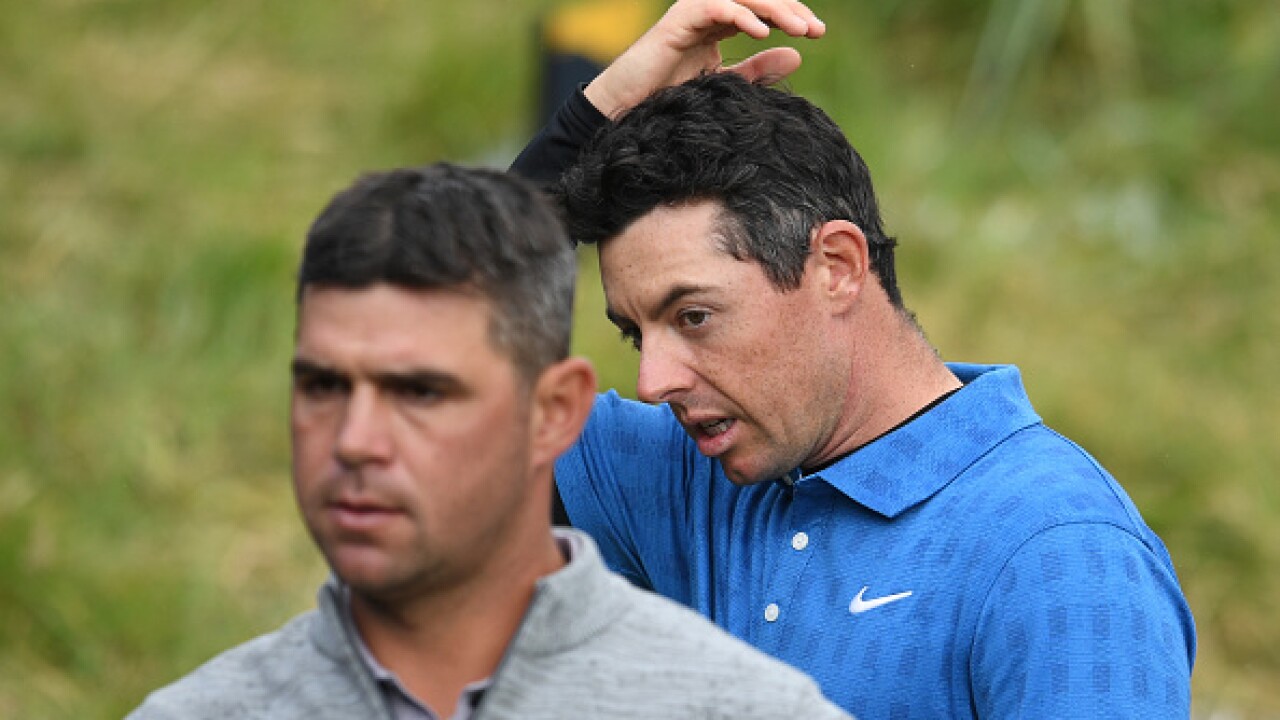 PORTRUSH, Northern Ireland (AP) — The opening tee shot Rory McIlroy could live with, even after it went out of bounds and shattered the screen of a woman’s mobile phone. He had, after all, spent the last five years anticipating a homecoming like no other and the first shot was always going to be a battle between muscle memory, nerves and the wind that blows off the North Atlantic coast.

The missed tap-in was another story all together. McIlroy was still kicking himself for that when he made another mess on the 18th hole to cap a day that went horrendously wrong for the hometown hero — and likely shot himself out of the first British Open in Northern Ireland in 68 years.

“Inexcusable,” said McIlroy, who would have been excused if he had picked a few other choice words to describe the putt on the 16th hole.

A day McIlroy had been anticipating for so long came apart almost before it began. A dreaded snowman on the first hole, a triple on the last and McIlroy shook hands with his playing partners before walking to the scoring tent to sign a card with a fat 79 at the bottom.

He teed off as the betting favorite to hold the claret jug on Sunday. Now the odds are against him even making the cut.

All on a course where he shot 61 as a 16-year-old amateur and in an area where the mere mention of his name draws proud smiles from a population divided over a lot of things — except golf.

“I didn’t give a very good account of myself out there,” McIlroy said. “I can play better, as you know.”

He can, and probably will. McIlroy didn’t win four major championships and climb to the top of the world golf rankings without having the ability to rebound from a tough round.

But he had an opportunity he’ll have only once in his life in the historic return of the Open to Northern Ireland. And he let it slip away with bookend holes that went awry and a startling lack of concentration in between.

Maybe it was just too much for anyone to handle to begin with — even a player named Rory McIlroy.

“He’s got so much pressure on him and expectations,” playing partner Paul Casey said. “There is nothing more difficult than playing in front of your friends and your family. To me that’s the ultimate pressure.”

But the thousands of cheering fans on the first tee surely expected McIlroy to be competitive. They certainly expected to see him on Sunday.

The cheers turned to a low murmur as McIlroy’s iron off the first tee headed left and rode the wind past the OB marker into the crowd. He had hit a tee shot in practice out of bounds to the right the day before, and admitted that thought might have been in his head.

There were nerves, too, though McIlroy says he’s always nervous on the first tee of a big championship. But this was a different kind of nervous, at least until McIlroy — after taking an unplayable after his third shot — ended up with an 8 and headed to the second tee.

“It almost settled me down,” he said. “It was almost like, well, that’s sort of the worst that can happen. Put your head down and keep going.”

McIlroy did just that, playing steady, if unspectacular, golf as the wind swirled, rain came and went and some of the early players began posting scores in the 60s.

The he missed a 6-footer on the 16th hole and, shockingly enough, the tap-in that followed.

It was a mistake McIlroy chalked up to a lack of concentration. He said he was still thinking about hitting the first putt on a bad line when he quickly hit what should have been a gimme.

A tee shot on 18 into the deep rough that led to a triple-bogey 7 finished things off for the day — and likely for the tournament.

If there was any consolation to draw from the day, McIlroy was hardly alone. There were scores to be had at Royal Portrush but Tiger Woods struggled mightily, Adam Scott shot 78 after coming in a week early to prepare, and Phil Mickelson signed for a 76.

In the end, McIlroy stood tall and answered every question asked. He even allowed himself a few smiles.

“I’m disappointed, but at the end of the day I’m still the same person,” he said. “I’m going to go back and see my family, see my friends, and hopefully they don’t think any less of me after a performance like that today. And I’ll dust myself off and come back out tomorrow and try to do better.”