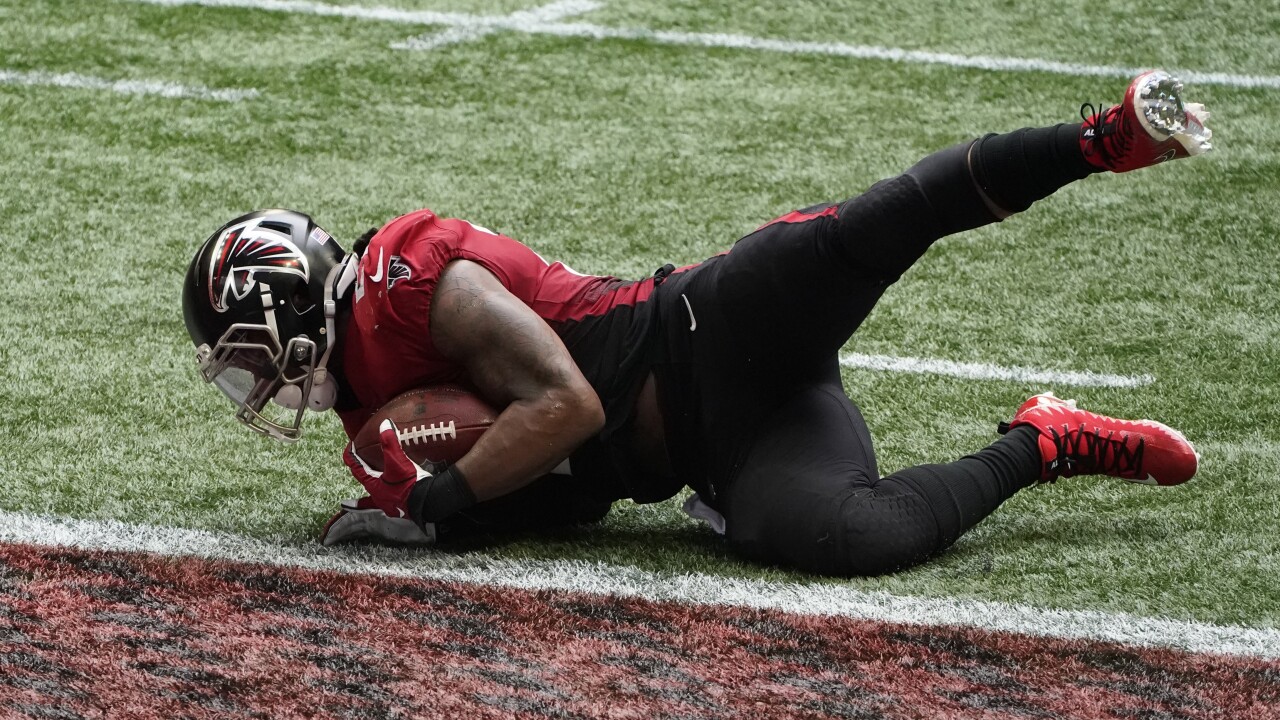 Copyright 2020 The Associated Press. All rights reserved
John Bazemore/AP
Atlanta Falcons running back Todd Gurley (21) scores a touchdown against the Detroit Lions during the second half of an NFL football game, Sunday, Oct. 25, 2020, in Atlanta. (AP Photo/John Bazemore)

ATLANTA (AP) — The image of Todd Gurley falling on the goal line as Detroit Lions defensive players celebrated, raising their arms to signal the touchdown, is the new low point of the Atlanta Falcons’ crumbling season.

Interim coach Raheem Morris tried to take the burden of that botched play off Gurley on Monday. Morris accepted blame for the play call, saying he should have had quarterback Matt Ryan kneel down.

By kneeling with Detroit leading 16-14, the Falcons could have worked down the clock and set up a potential winning field goal. Gurley’s first-down run through an accommodating Detroit defense left the Lions time to drive downfield for their last-second touchdown in the 23-22 win.

The biggest blunder of a troubling list of mistakes again cost the Falcons a chance to win.

The Falcons have been inventive when it comes to finding new ways to lose. Earlier this season, Atlanta players stood and watched an onside kick spin on the turf instead of falling on the ball, opening the door to an improbable 40-39 defeat at Dallas on Sept. 20.

The loss to the Cowboys was part of an 0-5 start that led to the firings of coach Dan Quinn and general manager Thomas Dimitroff. Morris was promoted from defensive coordinator to replace Quinn on an interim basis.

Falling to Detroit wasn’t the way Morris wanted to show he deserves to be more than a fill-in coach.

“My biggest regret today,” Morris said. “I wanted to give the ball to Todd and let him take the knee. I made that decision. I don’t want to put that on Todd.”

Morris was aware Lions defenders would try to strip the ball to force a fumble. He said he wanted the ball in a “sure running back’s hands.”

“That was the mistake I made,” Morris said. “I don’t want to put that on Todd. He got some momentum going and most great athletes will tell you that’s hard to stop.”

Gurley said after the game he was “mad as hell” he fell at the goal line when he tried to stop. Morris said he doesn’t want Gurley to feel responsible for the loss.

“When I get a chance to see him I’m going to let him know, put that on me,” Morris said. “I should have put the ball in Matt Ryan’s hands. ... No excuses about it. I’ll take that right to the face.”

“I think obviously we would do it differently,” Ryan said. “I don’t think there’s a question about that. Anytime you don’t come away with the result that you want, you have to take a look at things critically. I respect him for going out there and saying that, but as players, there’s lots of times throughout the game that we could have made plays to make it a different outcome. That’s what we have to focus on. We have to focus on doing our job and making plays when we get chances.”

The Falcons (1-6) are moving closer to a third straight losing season. No matter where blame rests, this team hasn’t learned how to win.

Ryan has five TD passes with no interceptions in the last two games — each with top receiver Julio Jones back on the field after missing all but one half of the previous three games with a hamstring injury.

For the season, Ryan has 12 TDs and three interceptions. He threw only one scoring pass against the Lions but completed 31 of 42 passes. It was his second straight game completing more than 70% of his attempts.

Morris said he wants the Falcons to adapt an aggressive mentality. He continues to stress the need for his players to “force our will” on opponents. But kicking a field goal instead of wasting a scoring opportunity could have meant more to the Falcons’ winning attitude in a close game.

Defensive end Dante Fowler Jr. stopped Adrian Peterson for a loss on a fourth-down run in the second quarter. The stop set up a touchdown that gave the Falcons a 14-7 lead. “He made some big splash plays today,” Morris said. “We needed one more from somebody and we didn’t get it.”

Falcons WR Russell Gage avoided a serious left knee injury when tackled by linebacker Reggie Ragland in the first quarter. Gage returned in the second half.

2.5 — For the second consecutive week, the Falcons were held below 3.0 yards per carry, running for 66 yards on 26 attempts, including 23 for 63 yards by Gurley, for the 2.5 average. Atlanta’s longest run was a 13-yarder by Gurley.

The third game for Morris as interim coach will be another chance to show he is making an impact on the team. The last game for Quinn was a 23-16 home loss to Carolina on Oct. 11. The Falcons visit the Panthers on Thursday night in the NFC South rematch.