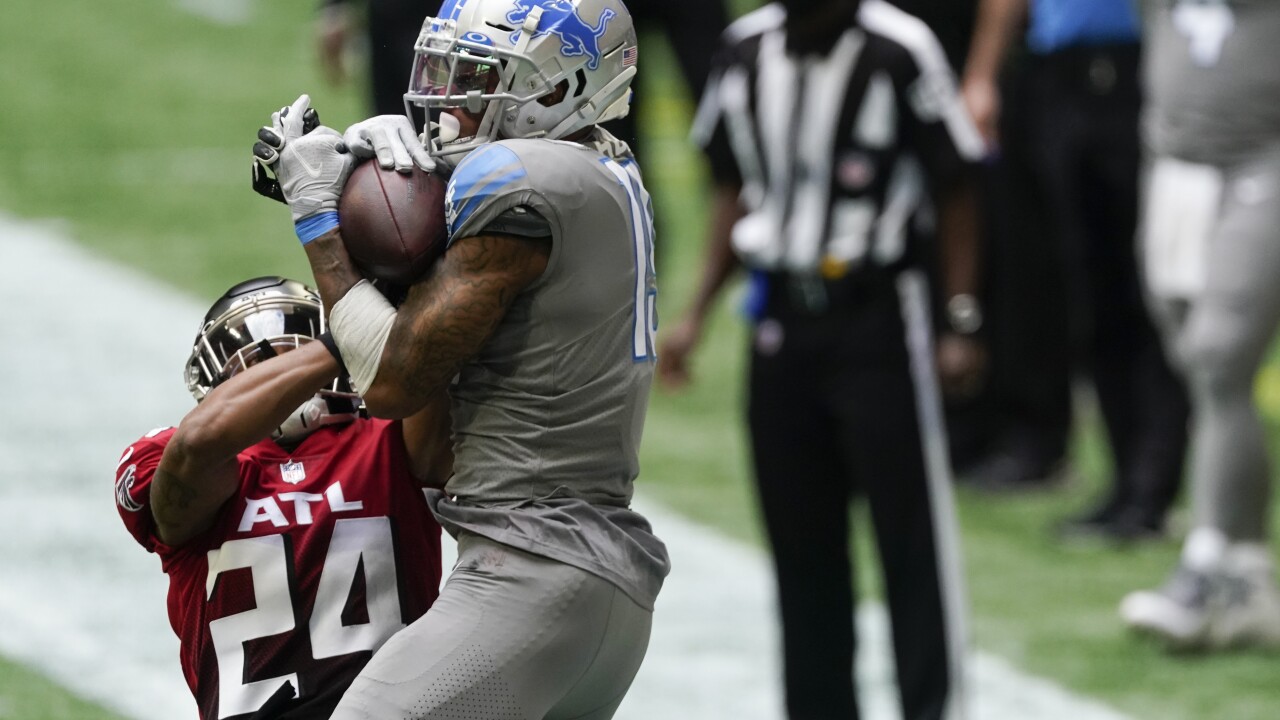 The Lions won their third game of the season on Sunday, but one of the biggest winners of the day may end up being Kenny Golladay.

The fourth-year wide receiver is in the last year of his rookie contract and made a not-so-subtle post on Instagram about a new deal a week ago. Against the Falcons, Golladay led the Lions receivers with six catches for 114 yards.

“I’m going to let you guys, you know, figure out what it means,” Golladay said on Sunday about the post. “I’m gonna just focus on this huge win we just got, and, man, that was a crazy game.”

Golladay showed why he might become a big-ticket free agent at the end of the season if the Lions don’t sign him. He caught a 32-yard pass on the game’s final drive. That catch with just three seconds remaining was crucial in the Lions dramatic 23-22 comeback. Two plays later, Stafford found tight end T.J. Hockenson for the game-winning touchdown as time expired.

“I thought he made some huge catches for us,” said Lions quarterback Matthew Stafford. “He’s making plays right now.”

After the game, Stafford discussed a different catch that Golladay made. With :23 left in the first half and trailing 14-7, Stafford and Golladay connected on an 18-yard reception. The ball was slightly overthrown by Stafford yet Golladay was able to leap over a defender and make the catch. That play eventually helped set up a Matt Prater 50-yard field goal and cut the Falcons lead to four points.

“Any time the ball is in the air, I want it to be mine,” Golladay said. “It has to be mine. I just got to make that play.”

While he didn’t score a touchdown in the win, it was the second straight game in which Golladay recorded than 100 yards in receiving. The Lions also won both games on the road.

“Kenny makes unbelievable catches every week,” said coach Matt Patricia. “I love everything he brings to the table for us.”

Golladay missed the first game of the season with a hamstring injury. His total yards in receptions have increased each of the five games he has played. And against the Falcons, Stafford counted on the 6-foot-4-inch receiver to make difficult catches at important times.

One particular catch Sunday was reminiscent of Lions receiver, Calvin Johnson. On a third and 11 on the Lions 31, Stafford started to scramble before throwing a bullet pass down the near sideline. Golladay turned and leaped, catching the ball as he took a punishing blow from a Falcons defender. The reception went for 29 yards and moved the Lions into Atlanta territory.

“Kenny is doing a great job when the ball is in the air and he’s ending up with the majority of them,” said Stafford. “That’s huge for me. That’s huge for our team. That brings juice to everybody.”