No. 7 Michigan hopes it is prepared for Army's triple option 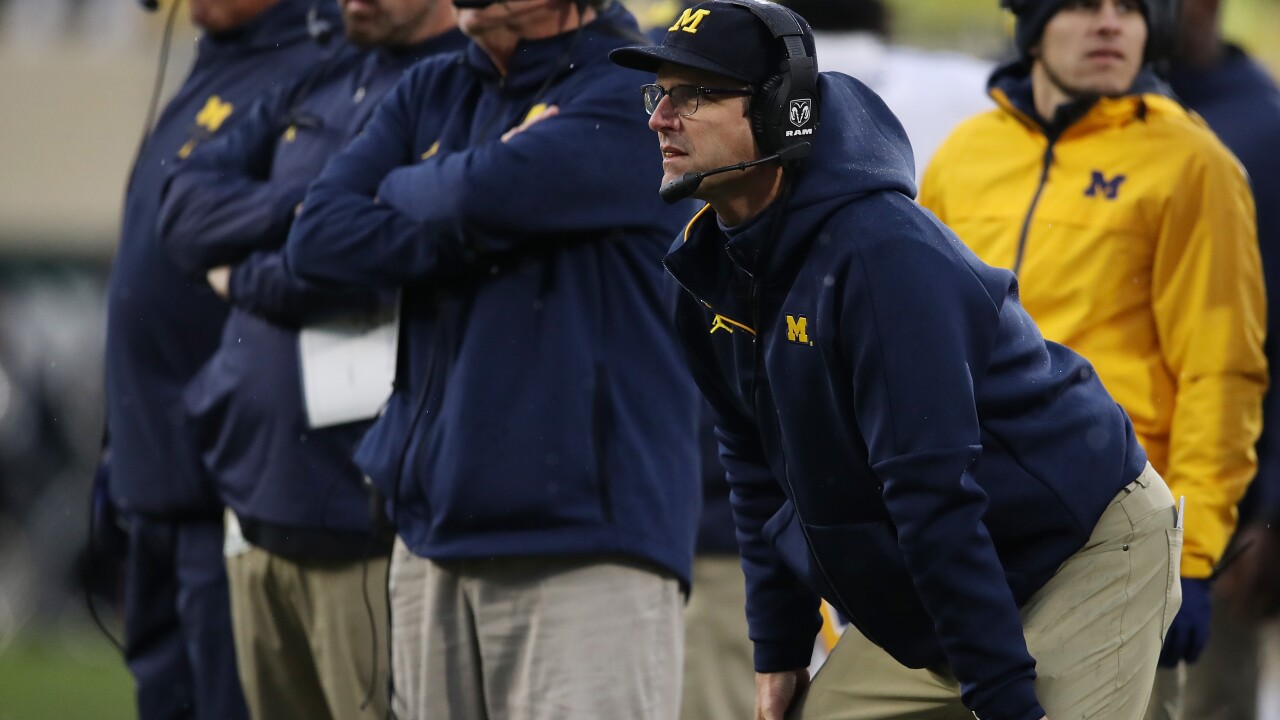 ANN ARBOR, Mich. (AP) -- No. 7 Michigan is facing a team it has been preparing to play since spring practice, when defensive coordinator Don Brown carved out extra time to study a scheme rarely seen in modern college football.

Army, which runs a triple option, is coming to the Big House to resume a series that has been idle for more than a half-century.

"They have a unique style on offense which is very, very effective," Michigan coach Jim Harbaugh said. "We kind of decided to play the game for the challenge of it.

Army won the first five meetings and the Wolverines won the next four with the last matchup coming in 1962.

Michigan is a heavy favorite to even the all-time series, but the Black Knights should have plenty of confidence Saturday after winning set a program-record 11 games last season. They have won 10 straight, trailing only Clemson's current run, since losing at Oklahoma in overtime.

Army is facing a top-10 team for a third straight year.

"I don't know that we need to play games like that every single week, but to play a game like that each year is really important to this program," coach Jeff Monken said. "It certainly is to the guys that play here, but it's also important to the legacy of the guys who play here to play those kind of games and challenge the very best teams in America."

Here are some other things to watch:

SEE HOW THEY RUN

Army averaged more than 300 yards rushing per game last season, trailing only Georgia Tech, and led the nation with 63-plus rushing attempts a game.

It wasn't a fluke.

The Black Knights led major college football in rushing two years ago and ranked second in 2016.

Senior Kelvin Hopkins ran for 1,017 yards and 17 touchdowns last season. He averaged fewer than eight passes per game, totaling 1,026 yards passing with six touchdowns and three interceptions. Hopkins ran for a touchdown and threw for a score on one of three passes he completed in eight attempts in last week's 14-7 win against Rice.

"The biggest thing about going into a game like this is just eye discipline and just not being lulled to sleep by their run game," Michigan cornerback Vincent Gray said. "And, knowing they can still break out any type of pass whenever they want to."

The Wolverines weren't sure a month ago when or if cornerback Ambry Thomas would return from a bout with a colitis diagnosis that landed him in the hospital. He was able to practice about a week before the season began and clearly was ready to play, intercepting a pass and recovering a fumble in his first career start.

"Everybody was just thrilled for Ambry," Harbaugh said.

Army led the nation in fourth-down conversions last season, successfully going for it 31 of 36 times. The 86-percent success rate validated Monken's penchant for gambling when most coaches would choose to punt.

"If the analytics book says go for it on fourth-and-1, most people wouldn't do that even if that's what the book says," Hopkins said. "Coach Monken believes in what we do here and he believes in us as a team. We've got to come through on that. More times than not, that's something we want. We're begging him to let us go for it. We've just got to capitalize."

Michigan might have wide receiver Donovan Peoples-Jones, left tackle Jon Runyan and defensive lineman Donovan Jeter back after each was held out of the opener with injuries.

Army fullback Connor Slomka didn't play in the opener, but he practiced this week to move a step closer to playing at Michigan.

"Having Connor back is awesome," Hopkins said. "He does some things you don't commonly see. He's very gifted."

"I thought it was really good, practically flawless," he said. "Decisive in the play-calling. Clear. Clean."