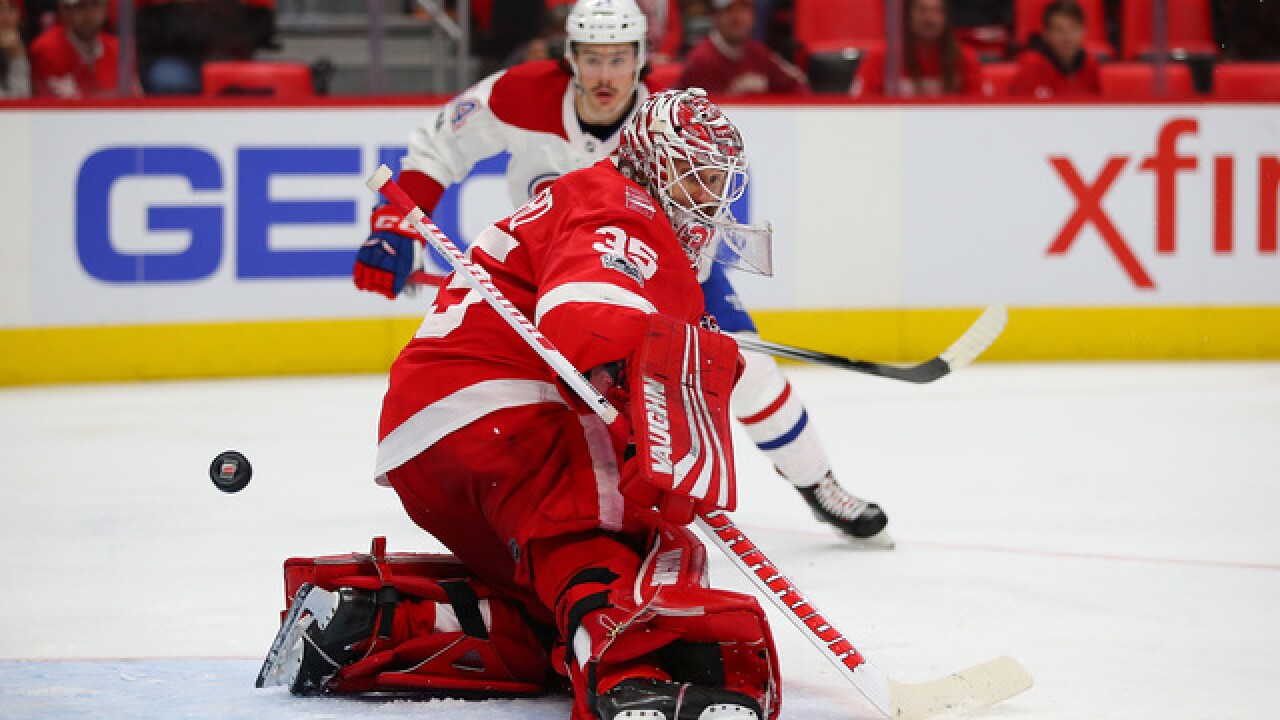 Evander Kane showed his skill, scoring a wraparound goal under the watchful eye of many NHL teams evaluating him in person.

Kane had a go-ahead goal late in the second period and Marco Scandella scored with a second left in overtime, lifting the Buffalo Sabres to a 3-2 win over the Detroit Red Wings on Thursday night.

About a dozen scouts were at the game checking out Kane as a player to possibly acquire and they had a great view of his 20th goal, which was scored directly in front of them in the press box. Kane told reporters earlier this week he expects to be traded before Monday's deadline.

He was glad the Sabres didn't scratch him to protect against injury.

"I understand the business so I can see why some teams choose to do that, but that's not what I want," Kane said. "I want to be on the ice with my team, no matter what is going to happen. I don't want to watch."

Some teams already out of the playoff race, including Buffalo and Detroit, are trying to trade players with expiring contracts for draft picks to potentially bolster the future of their franchises.

Kane is definitely a candidate to get dealt and perhaps one of the best players available.

The 26-year-old forward is expendable at least in part because he's in the last season of his deal with a rebuilding team led by first-year general manager Jason Botterill. The Sabres have not appeared to express an interest in re-signing Kane, who could command a lot of money as a free agent in July.

Kane, drafted No. 4 overall by Atlanta in 2009, was acquired by Buffalo from Winnipeg in 2015 a few weeks before the trade deadline in a deal that sent a first-round pick that year to the Jets. He has 20 goals this season, ranking second on the team, and 177 in his career.

Blashill was quick to bash the league's goaltender interference rule, which he said wasn't properly applied during a challenge of Kane's goal.

The Red Wings scratched veteran defenseman Mike Green for a fourth straight game with an upper-body injury, but he might play Saturday at home against Carolina.

"If he's healthy to play, he'll play," Blashill said. "There's risk in playing and there's risk in not playing. There might be teams that want to see him."

Rasmus Ristolainen scored early in the game to put the Sabres ahead and Robin Lehner finished with 35 saves, including some key ones in the extra period.

"I know the fans love overtime, but that's a lot of stress for the coaches," Sabres coach Phil Housley said. "I think we were probably taking too much risk in overtime, but Robin bailed us out with a couple huge saves."

Detroit's Jonathan Ericsson tied the game at 1 early in the second period. Justin Abdelkader pulled the Red Wings into a 2-all tie with 1:25 remaining in the third. They had a chance to win early in overtime, but Tomas Tatar failed to get a shot off on a breakaway.

"We've got to make sure we've got to keep our fight," Blashill said. "When that (Kane) goal went it, it took our fight away and we can't let that happen."

NOTES: Nashville, New Jersey, Chicago, San Jose, Colorado, Philadelphia, Winnipeg, Tampa Bay, the New York Islanders, Washington and Los Angeles had scouts assigned to seats in the press box. ... The Sabres acquired forward Scott Wilson from Detroit in December for a fifth-round pick in the 2019 draft. After 10 pointless games with the Red Wings, he began the game with five goals and five assists in 27 games with Buffalo.