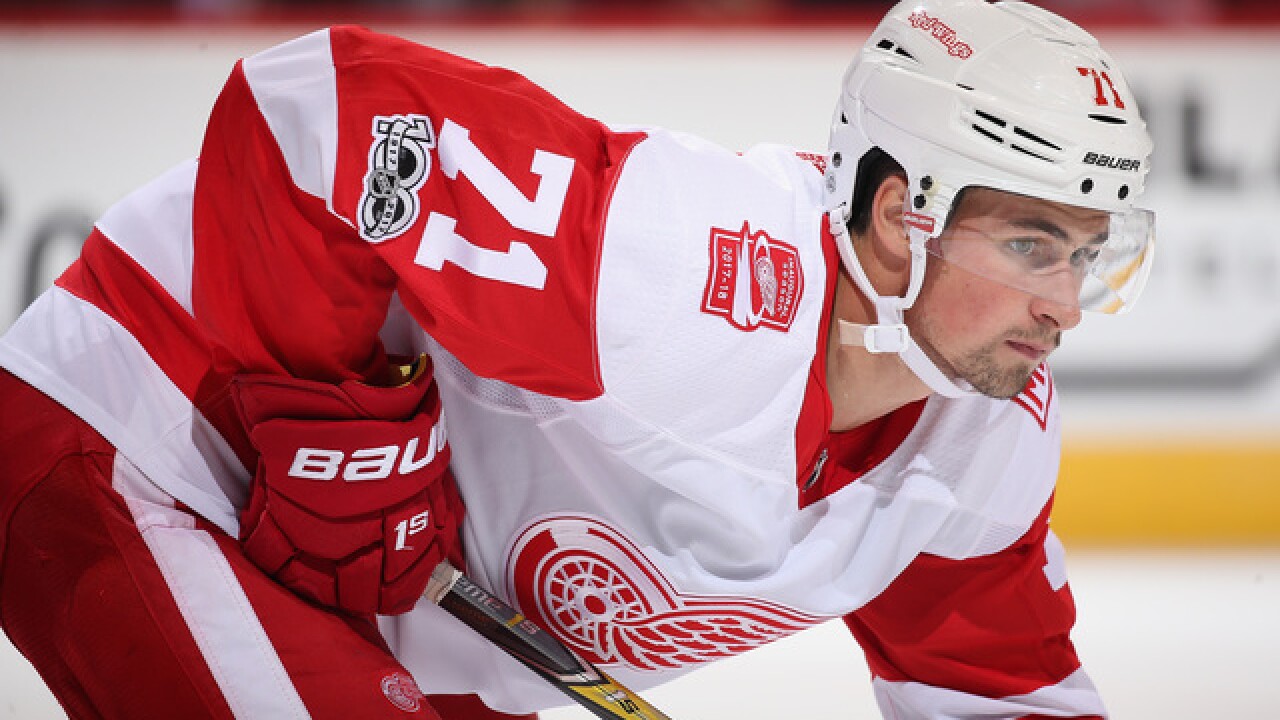 2017 Getty Images
Christian Petersen
<p>GLENDALE, AZ - OCTOBER 12: Dylan Larkin #71 of the Detroit Red Wings during the third period of the NHL game against the Arizona Coyotes at Gila River Arena on October 12, 2017 in Glendale, Arizona. The Red Wings defeated the Coyotes 4-2. (Photo by Christian Petersen/Getty Images)</p>

Anthony Mantha scored his team-leading fifth goal and Dylan Larkin added a goal and an assist as the Detroit Red Wings beat the Arizona Coyotes 5-3 on Tuesday night.

Knowing the Coyotes (1-11-1) had played the night before in Philadelphia, where they won in overtime for their first victory of the season, the Red Wings applied the pressure early. They fired the first eight shots on goal and scored twice before the game was three minutes old.

Gustav Nyquist intercepted a clearing attempt by Arizona defenseman Alex Goligoski and threaded a shot through traffic that beat goalie Scott Wedgewood at 1:31 of the first period.

Detroit made it 2-0 at 2:37 when Luke Glendening snapped a high wrist shot past Wedgewood on the blocker side.

The Coyotes got on the board 11:36 into the second when Jason Demers took a feed from Clayton Keller and his point shot eluded a partially screened Jimmy Howard.

But the Red Wings didn't allow the Coyotes a chance to start feeling good. Mantha made it 3-1 at 13:03, chipping a pass from Andreas Athanasiou behind Wedgewood.

Detroit increased its advantage to 4-1 in the final minute of the second when Larkin's backhand pass deflected off the stick of Coyotes defenseman Luke Schenn and over Wedgewood's shoulder at 19:03.

The Coyotes capitalized early in the third when Nick Cousins lifted a backhand past Howard at the two-minute mark. They pulled within a goal at 16:43 when Keller's shot deflected off Howard's stick.

Darren Helm scored into an empty Coyotes net at 18:34 to close out the scoring.

NOTES: After wearing No. 40 in his debut Monday for the Coyotes, Wedgewood opted to switch to No. 31. ... D Niklas Hjalmarsson was out for the Coyotes with a lower-body injury sustained Monday at Philadelphia. . Detroit D Danny DeKeyser (sprained ankle) missed his 10th straight game.

Coyotes: Host the Buffalo Sabres on Thursday, their first home game since Oct. 21.

Red Wings: Begin a four-game road trip through Canada on Thursday at Ottawa, where they won 2-1 in a shootout on Oct. 7.