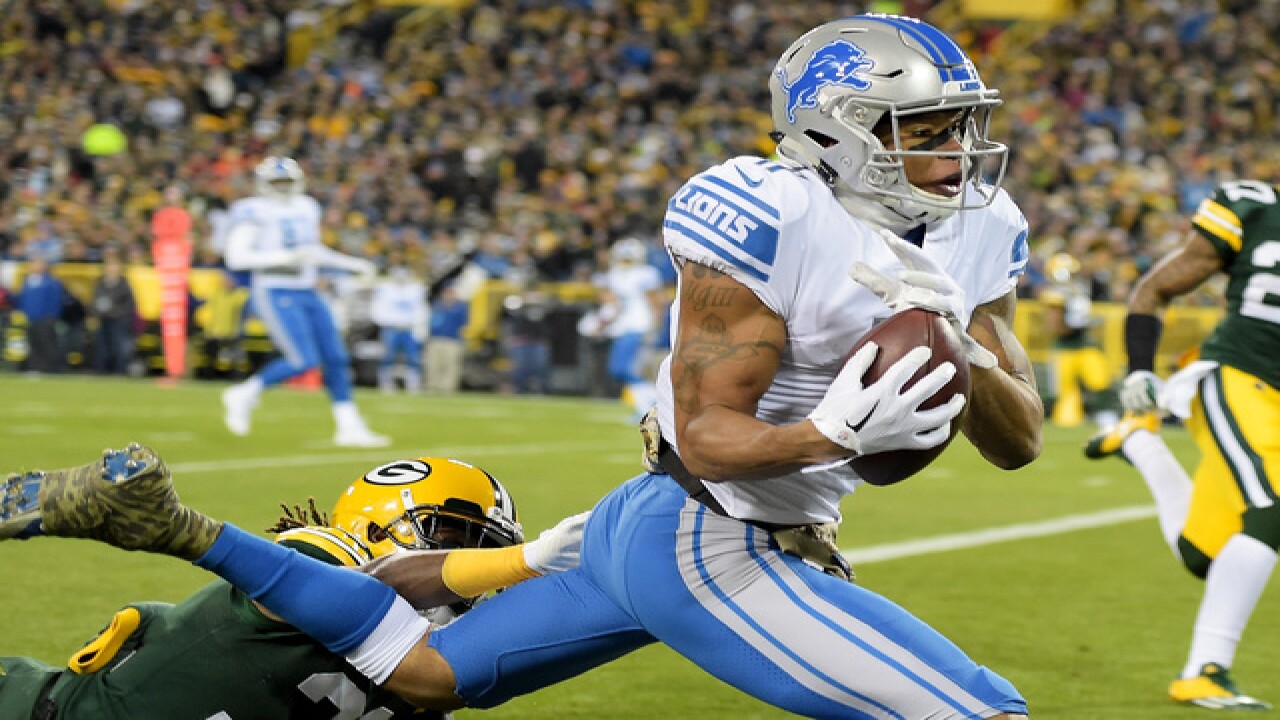 Aaron Rodgers could only watch from the sideline.

Stafford passed for 361 yards and two touchdowns to Marvin Jones, and the Lions snapped a three-game losing streak with a 30-17 win on Monday night over the offensively challenged Green Bay Packers.

Green Bay (4-4) finally got in the end zone on Brett Hundley's 1-yard quarterback sneak with 9:52 left.

The Lions answered with Stafford's 11-yard touchdown pass to Jones with 8:06 remaining, putting the game out of reach with a 17-point lead. Jones had seven catches for 107 yards.

The Packers have lost three straight games. Their once-potent offense has struggled since Rodgers broke his right collarbone on Oct. 15 at Minnesota.

Hundley finished 26 of 38 for 245 yards. Cornerback Darius Slay blanketed Jordy Nelson when the Packers did try to throw long while the game was still competitive.

"With this one obviously it doesn't get a whole lot better than this. We played well," Lions coach Jim Caldwell said.

Abdullah fumbled the ball away in the third quarter, but the Packers went three-and-out on the ensuing drive. Familiar problems in the red zone popped up for the Lions when they were stopped on three plays at the Packers 1, forced to settle for a field goal for a 17-point lead with 12:25 left.

But without Rodgers, the Packers couldn't keep up with the accurate, rocket-armed Stafford.

THIRD DOWNS
The Lions were 8 of 13 on third-down conversions, with Stafford burning the Packers with clutch throws. The Packers were just 2 of 9 on third downs and failed to convert both of their fourth-down chances.
"They controlled the third-down battle tonight," McCarthy said. "We have work to do. That's the fact of the matter and we have to do it fast."

CRITICAL PENALTY
The Lions' opening score was set up by an unnecessary roughness penalty on Mike Daniels, after the defensive lineman appeared to head-butt Detroit center Travis Swanson. The flag negated an incompletion on third-and-15 that would have forced the Lions to punt from their own 25. Stafford connected with Jones for the touchdown pass five plays later.

MILESTONE
The first scoring strike to Jones was the 200th touchdown pass in 117 career games for Stafford, the sixth-quickest in NFL history to reach the milestone. Stafford, who turns 30 in February, is also fourth in NFL history for career touchdown passes before age 30 behind Dan Marino, Peyton Manning and Brett Favre.

NOT SPECIAL
Special teams didn't help the Packers.
Working in their third long snapper of the season because of injuries, Green Bay had a 38-yard field goal blocked in the first quarter on a play that started with a low snap. Trevor Davis didn't get past the 22 on three kickoff returns in the first half.

STAT LINES:
Lions: WR Golden Tate joined Jones over the 100-yard mark with seven receptions for 113 yards. ... Abdullah had 21 carries for 48 yards.
Packers: The team's playmaking receivers did have more opportunities, though most came on short passes. Randall Cobb finished with 58 yards on five receptions, including a catch-and-run for a 46-yard gain that set up Hundley's TD run. Davante Adams had seven catches for 53 yards.
"This game they were giving us the underneath stuff," Hundley said. "You have to take what's given."

ANTHEM
It appeared that all members of both teams stood for the national anthem, with many players and coaches locking arms on their respective sidelines.

UP NEXT
Lions: Host the Cleveland Browns on Sunday.
Packers: Visit the Chicago Bears on Sunday.