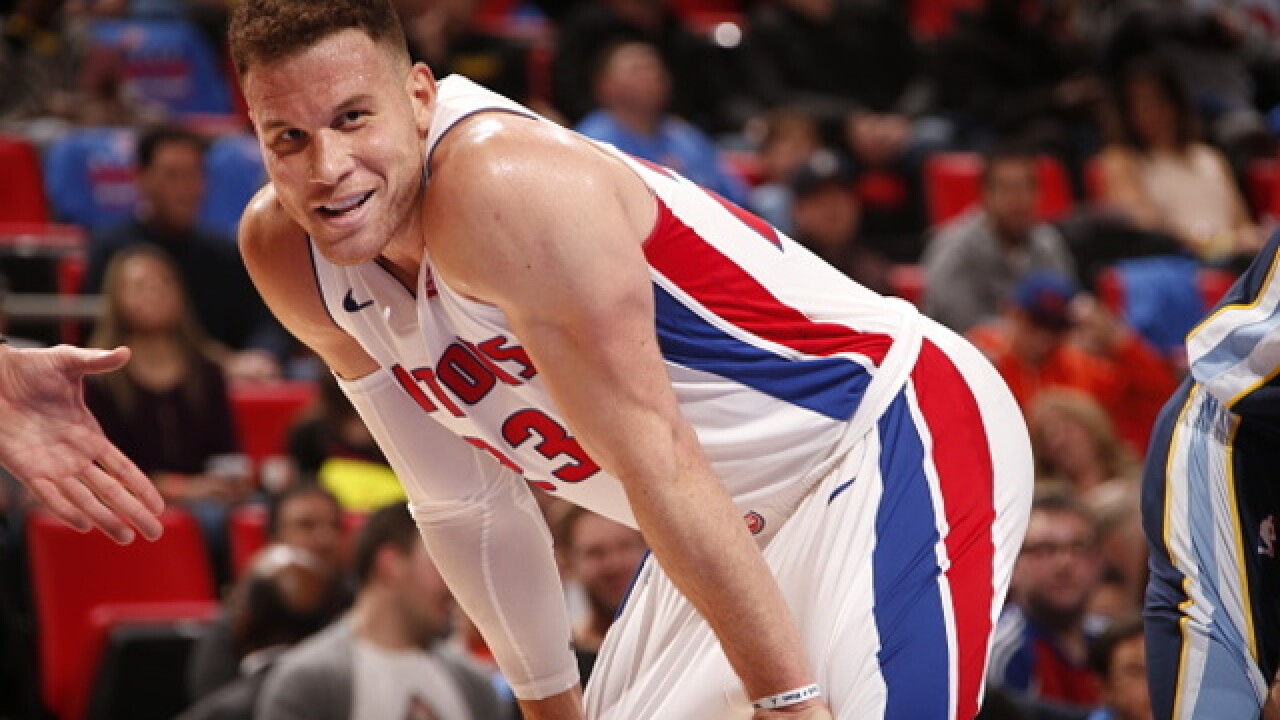 Copyright 2018 Scripps Media, Inc. All rights reserved. This material may not be published, broadcast, rewritten, or redistributed.
Brian Sevald
<p>DETROIT, MI - FEBRUARY 1: Blake Griffin #23 of the Detroit Pistons reacts against the Memphis Grizzlies on February 1, 2018 at Little Caesars Arena in Detroit, Michigan. NOTE TO USER: User expressly acknowledges and agrees that, by downloading and/or using this photograph, User is consenting to the terms and conditions of the Getty Images License Agreement. Mandatory Copyright Notice: Copyright 2018 NBAE (Photo by Brian Sevald/NBAE via Getty Images)</p>

Blake Griffin was Detroit's best player in his debut with the Pistons.

Griffin had 24 points and 10 rebounds, and although his new team is still very much a work in progress, the Pistons edged the Memphis Grizzlies 104-102 on Thursday night.

Detroit traded for Griffin earlier in the week. The Pistons haven't had much time to work with him, but they were clearly a better team when he played against the Grizzlies.

"We were plus-23 with him on the floor in 35 minutes, so we were fairly dominant in that time," coach Stan Van Gundy said. "I don't know why we haven't gotten to all this in the hour and 15 minutes we've had together, but we've really got to get our spacing down and understand where we want people to be."

Griffin's teammates looked uncertain at times, but Detroit was able to outlast a Memphis team that is without Tyreke Evans and Mike Conley.

"I wanted to just come out and play hard, being very limited in my knowledge of our offense," Griffin said. "I thought coach Van Gundy did a great job of just putting in five things that we could go to, and we ran them to death, but they worked and everybody just played hard."

Anthony Tolliver's 3-pointer with 1:49 remaining gave Detroit a 101-100 lead, and the score stayed that way until the final seconds. Marc Gasol attempted to drive on Griffin but missed his shot, and a wild scramble led to a jump ball between Tolliver and Dillon Brooks with 10.4 seconds left.

The Pistons controlled that tip, with Reggie Bullock running the ball down in the corner. Tolliver gave Detroit a three-point lead with a pair of free throws, and then purposely fouled Wayne Selden with 2.6 seconds remaining. Selden made the first free throw and the second went in even though he was trying to miss and give his team a chance at an offensive rebound.

Bullock made it 104-102 when he made the second of two free throws with 2 seconds left. The Grizzlies were out of timeouts, and after Gasol caught the ensuing inbound pass near midcourt, his long attempt at the buzzer wasn't close.

"We can't say that our goal is to give ourselves a chance to win, the goal has to be to win," Gasol said. "We have to go out and grab these games when we have the chance."

Griffin was the first Detroit starter announced before the game and received a big hand from the crowd. The arena still didn't appear full — the Pistons have struggled with attendance for several years — but the atmosphere was lively, especially during the tight finish.

Griffin's first points came when he powered to the basket and made a shot off the glass. He lobbed a nice alley-oop to All-Star Andre Drummond in the second quarter, although that duo didn't look totally in rhythm together. Drummond had 14 points and 15 rebounds but sat out some of the crucial possessions late.

Grizzlies interim coach J.B. Bickerstaff received a technical foul early in the fourth quarter and wasn't thrilled about the difference in free throws. Memphis went 14 of 14, but Detroit was 27 of 37.

"The free throws are the bottom line — 37-14. No one can overcome that," Bickerstaff said. "Our guys compete too hard to be put in this situation every night. We've asked the league for help. Maybe someone can sit down with us and tell us what we're doing wrong."

Van Gundy said before the game that only two of his seven assistant coaches would be on the bench with him. Tim Hardaway had a funeral to attend, and four others were sick.

"If anybody wants to sit on the bench with me tonight, we have plenty of room," Van Gundy said. "That flu is no joke."

Detroit received two other players in the trade with the Clippers. Brice Johnson did not play Thursday, but Willie Reed did, picking up three fouls in just 5:22.

Grizzlies: Evans was not with the team and missed a second straight game amid trade speculation about his future. Conley has a left heel injury. ... Gasol had 19 points and 14 rebounds. ... Memphis dropped to 3-8 on the second night of back-to-backs.

Pistons: Host the Miami Heat on Saturday night in the third game of a six-game homestand.