FOX 47 is operating at reduced power. Your signal may be affected!
SportsNBAPistons 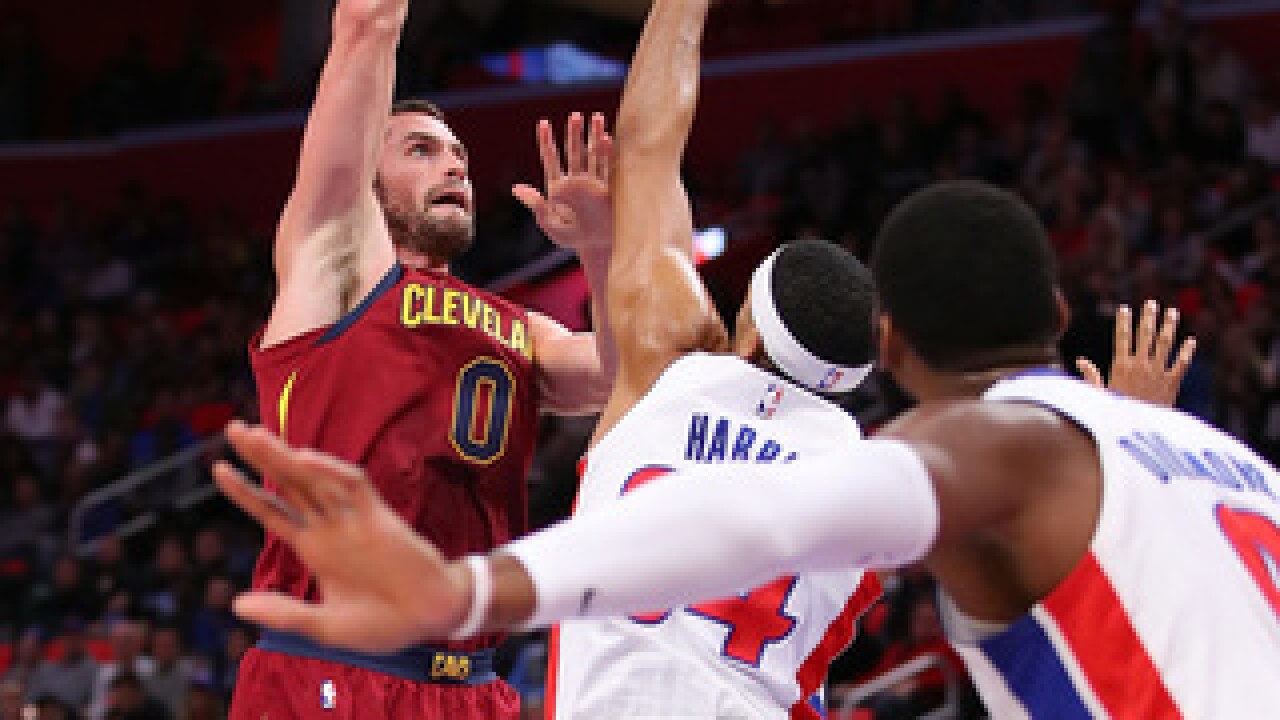 2017 Getty Images
Gregory Shamus
<p>DETROIT, MI - NOVEMBER 20: Kevin Love #0 of the Cleveland Cavaliers takes a shot over Tobias Harris #34 of the Detroit Pistons during the first half at Little Caesars Arena on November 20, 2017 in Detroit, Michigan. Cleveland won the game 116-88. NOTE TO USER: User expressly acknowledges and agrees that, by downloading and or using this photograph, User is consenting to the terms and conditions of the Getty Images License Agreement. (Photo by Gregory Shamus/Getty Images)</p>

LeBron James scored 16 of his 18 points in the first quarter and the Cleveland Cavaliers made 11 3-pointers in the first half on the way to a 116-88 rout of the Detroit Pistons on Monday night.

Cleveland led 73-46 at halftime thanks to an overwhelming shooting performance, an indication that Detroit's stay atop the Central Division might not last much longer. The Pistons still lead the Cavs by a game, but Cleveland has won five straight and scored at least 110 points in eight of its last nine.

The Cavaliers led 27-22 when James went to the bench late in the first quarter. By the time he came back in, it was 50-30. Cleveland's reserves ended up outscoring Detroit's 26-8 in the first half.

The Cavs shot 62 percent from the field in the first two quarters and 11 of 17 from 3-point range. They finished the game 16 of 33 from beyond the arc. Cleveland led 101-62 after three, and the top players for both teams had plenty of time to rest in the final period.

This had the feel of a big game before it started. Although there were still some empty seats at Little Caesars Arena, the Pistons' new home seemed closer to full than on previous nights, and the team played well on offense at the start. A 3-pointer by Avery Bradley put Detroit ahead 18-17.

James, however, answered with two 3s and a turnaround jumper, and the Pistons weren't able to keep up with Cleveland's torrid shooting. It was 36-23 after the first quarter, and the Cavs broke the game open at the start of the second. Channing Frye made back-to-back 3-pointers to make it 46-28.

The previous matchup between these teams wasn't much different. The Cavs beat Detroit 128-96 on March 14 in Cleveland. That was the largest margin of victory by the Cavs against the Pistons — although Cleveland nearly broke that mark Monday.

Pistons: Jon Leuer (left ankle sprain) did not play. ... Detroit's six-game home winning streak was snapped. This was also the first time all season the Pistons lost the latter half of a back-to-back. They had been 3-0. ... Andre Drummond moved into fifth place on the Pistons' career list with 5,205 rebounds. Larry Foust had 5,200.

Pistons: At the Oklahoma City Thunder on Friday night.