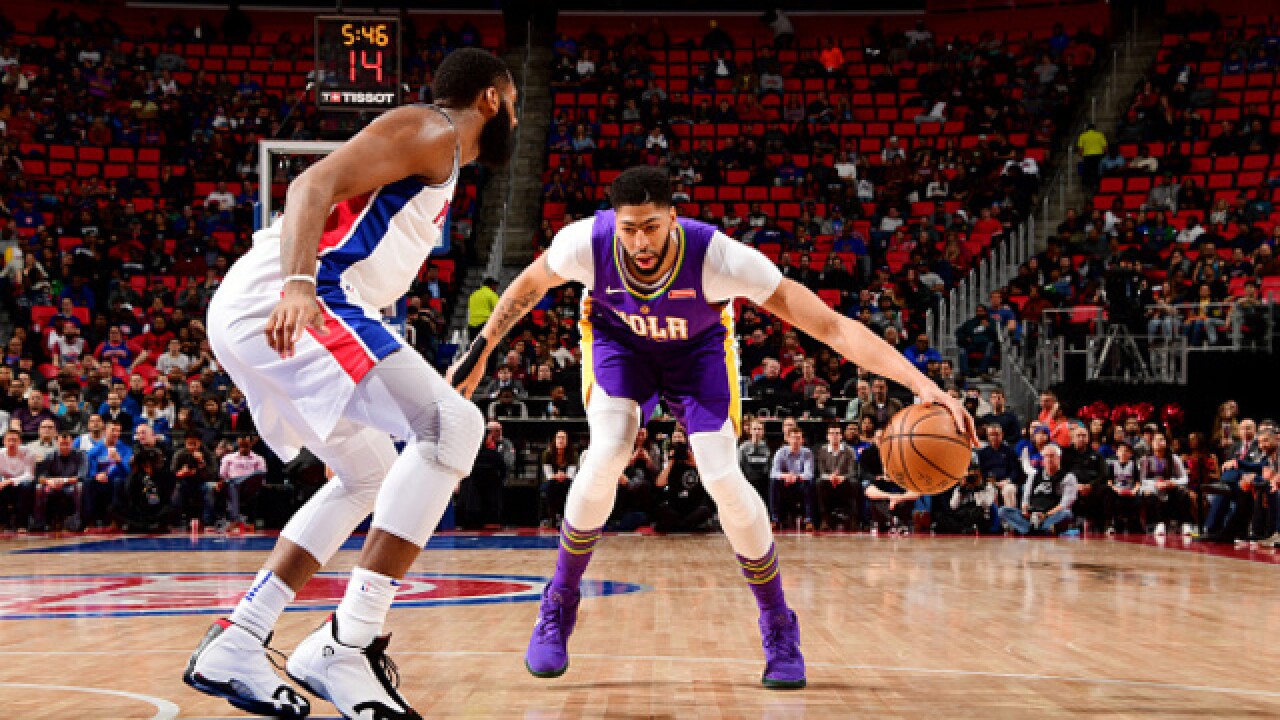 Copyright 2018 Scripps Media, Inc. All rights reserved. This material may not be published, broadcast, rewritten, or redistributed.
Chris Schwegler
<p>DETROIT, MI - FEBRUARY 12: Anthony Davis #23 of the New Orleans Pelicans handles the ball against the Detroit Pistons on February 12, 2018 at Little Caesars Arena in Detroit, Michigan. NOTE TO USER: User expressly acknowledges and agrees that, by downloading and/or using this photograph, User is consenting to the terms and conditions of the Getty Images License Agreement. Mandatory Copyright Notice: Copyright 2018 NBAE (Photo by Chris Schwegler/NBAE via Getty Images)</p>

New Orleans star Anthony Davis dominated Detroit as he usually does, scoring all over the court no matter who was trying to defend him in a red, white and blue uniform.

In another one of his strong performances against the Pistons, Davis had 38 points and 10 rebounds to lead the Pelicans to a 118-103 victory on Monday night.

Davis is averaging 30.4 points per game against the Pistons, his highest total against an NBA team. He scored a career-high 59 against them nearly two years ago.

"It's not just them," New Orleans coach Alvin Gentry said. "It might be him."

Davis is a key reason why the Pelicans have won 11 of the last 12 games against the Pistons.

Detroit attempted to defend Davis with Andre Drummond and Blake Griffin, but they were no match for Davis inside, off the dribble or on the outside. The All-Star was 14 of 24 from the field, including 3 for 6 on 3-pointers.

"I'm playing him as tough as possible, and I didn't give him any easy layups," Drummond said. "He's just a hell of a player, and he's making contested jumpers and contested 3s."

Davis had 10 points in the second quarter, powering New Orleans to a 60-52 lead at halftime.

Nikola Mirotic helped the Pelicans pull away in the third quarter and finished with 21 points and 12 rebounds.

"We were terrible on defense," Detroit coach Stan Van Gundy said. "I don't think we did anything well. When you aren't getting back in transition and you won't get your body between the ball and the basket, you aren't tough enough to win."

New Orleans has won two straight for the first time since DeMarcus Cousins tore his left Achilles tendon. The Pelicans are 3-5 without the All-Star center.

"He was such a big part of everything," Gentry said. "We have guys adjusting to new roles. It takes a little while."

The Pistons have lost three straight after winning five in a row, including four with Griffin.

"We haven't deserved to win these last three games," Van Gundy said. "There were five or six loose balls where no one got on the floor and too many times where people got behind us in transition. Those are inexcusable."

Pelicans: DeAndre Liggins limped toward the locker room late in the first half with a bruised left thigh, but not before drawing a charge against Stanley Johnson while hobbled on the court. Liggins stayed out in the second half. "He could've played, but we thought it would be better to rest him," Gentry said. ... Jrue Holiday had 21 points and 12 assists, and Darius Miller scored 12 points.

Emeka Okafor, who signed a 10-day contract with New Orleans earlier this month, started for the first time since the 2012-13 season. Gentry changed the lineup to bring Mirotic off the bench.

Van Gundy played Nelson in place of Ish Smith for long stretches of the second half and played rookie Luke Kennard more minutes than usual after halftime.

Pistons: Host Atlanta on Wednesday night. "We can't just limp into the All-Star break," Van Gundy said. "We need to get a win and start making up some ground to get back into this."