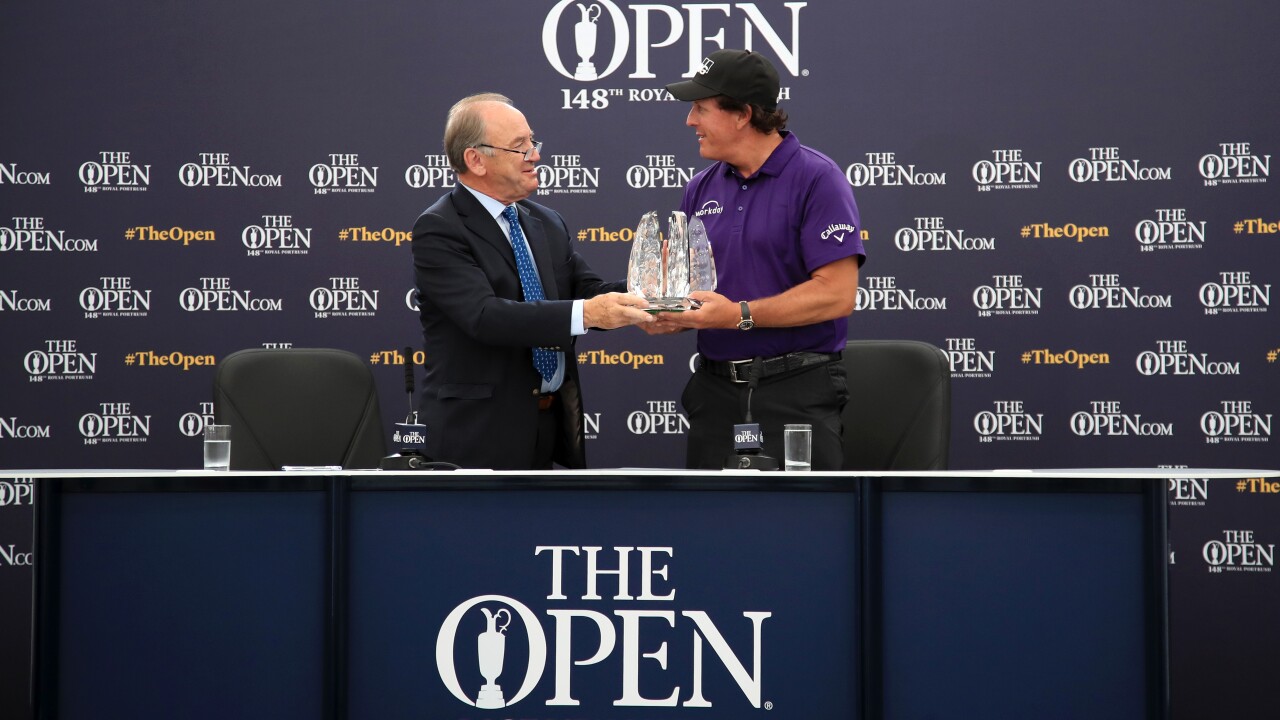 No, it wasn’t for most days without eating.

One of the hallmarks of Mickelson’s career is playing for so long at a consistently high level, and the Official World Golf Ranking board honored him for a feat that might be as remarkable as his 47 wins worldwide or his five majors.

Starting with a runner-up finish at the Casio World Open in Japan in November 1993 — the same year Jordan Spieth and Justin Thomas were born — Mickelson has never been outside the top 50 in the world. The award was for 25 consecutive years, and he’s still going.

“To play for this long, I’m very thankful and appreciative,” Mickelson said.

Peter Dawson, the former R&A chief who now chairs the OWGR board, said Mickelson has been among the top 50 for 1,338 consecutive weeks. The second-longest streak belongs to Ernie Els, at 965 weeks. Among active streaks, Rory McIlroy is next at 556 weeks.

How has Mickelson done it?

“I don’t have a great answer for that,” Lefty replied, though he suggested a long swing has led to a long career because it has kept him largely free of injuries.

As for the motivation, Mickelson has never lacked that.

“I love that I do,” he said, referring to golf as being a soothing, almost spiritual feeling. “I need it to function.”

Even with this remarkable accomplishment, Mickelson can’t avoid questions about his six-day fast in which he says he lost 15 pounds. He posted a message on Twitter that begins, “Let’s get real.”

He says he hasn’t been at his best and wanted a “hard reset.” So he did a six-day fast, drinking nothing but water and a special coffee blend designed for wellness. Mickelson says he craved food for the first day but was fine after that.

“I don’t know if it will help me play better, but it makes feel better about myself,” he said.

Justin Rose isn’t alone in trying to adjust to a schedule that stacks one major on top of the next one during four months — the Masters in April, PGA Championship in May, U.S. Open in June and British Open in July.

He mentioned earlier this year that previously, no one had to think about a major for nearly two months after the Masters. That’s no longer the case with the PGA moving to May, and Rose said he’s had a hard time finding a rhythm.

“I think we’re all trying to adapt to this new schedule, this new rhythm of the majors, and they seem to be coming thick and fast at the moment,” Rose said. “It’s about trying to peak, valley and peak again. ... I think it’s trial and error figuring out what’s going to work. One major a month ... in my opinion, they’re too soon.”

It hasn’t affected Brooks Koepka, who won the PGA Championship and was runner-up in the Masters and U.S. Open. No one has ever finished first or second in all four majors in the same year.

Justin Thomas can’t relate to other players because he missed the PGA Championship with a wrist injury.

“But I think it’s going to take a couple of years for everyone to figure out what kind of works for them and getting ready for the majors or playing in other events that maybe they didn’t have the opportunity to in previous years,” Thomas said.

The schedule was rearranged to allow the PGA Tour season to finish at the end of August, before football. Rose argues that majors should be “protected the most” because “that’s how all of our careers ultimately are going to be measured.”

For the second straight year, Dustin Johnson received a trophy at the British Open.

It was crystal for displaying, not a silver jug for drinking.

Johnson won the Mark H. McCormack Award again for spending the most weeks at No. 1 in the world in 2018 (35 weeks). He joins Tiger Woods and Rory McIlroy as the only player to win it more than once. Woods won it the first 13 years the award existed.

The other winners of the award, which began in 1998, were Luke Donald and Jason Day.

It was named after the founder of IMG who was behind the notion of ranking golfers worldwide, which became official at the 1986 Masters.

Gary Woodland’s wife is on bedrest as she awaits the birth of twins in a few weeks, while her husband is across the sea playing in the British Open.

At least she has the U.S. Open trophy to look at. It’s on the nightstand next to the bed.

“She is looking at it all the time,” Woodland said. “I don’t know if she’s excited about that. But it’s been pretty close to me.”

Woodland said he has it on the nightstand to remind him of the special moment when he won his first major championship, which happened last month at Pebble Beach.

Just as real is the impending birth of twin daughters, who Woodland hopes don’t arrive before their scheduled time.

“Our girls are supposed to come in two weeks,” he said. “So it was a decision, we sat down and we talked about it. And she was the one pushing me to come. Pretty confident they’re not going to come this week, but you never know.”

Justin Thomas never saw Royal Portrush before arriving here this week. But he did do some studying on video.

Nothing too extreme, though, because not a lot exists.

“I tried to watch some videos. I couldn’t find very much,” Thomas said. “Even though it’s been 2012 (since) the Irish Open was here, even in seven years how much the technology has changed or just how less video (there is).”

“I’ve watched a little bit,” he said. “Stuff on YouTube. Especially when I have the sleepless nights and mornings of doing nothing, you get bored pretty quickly.”

Thomas said he has been better served coming over early to play in the Scottish Open and to get adjusted to the time difference and different style that links golf is.