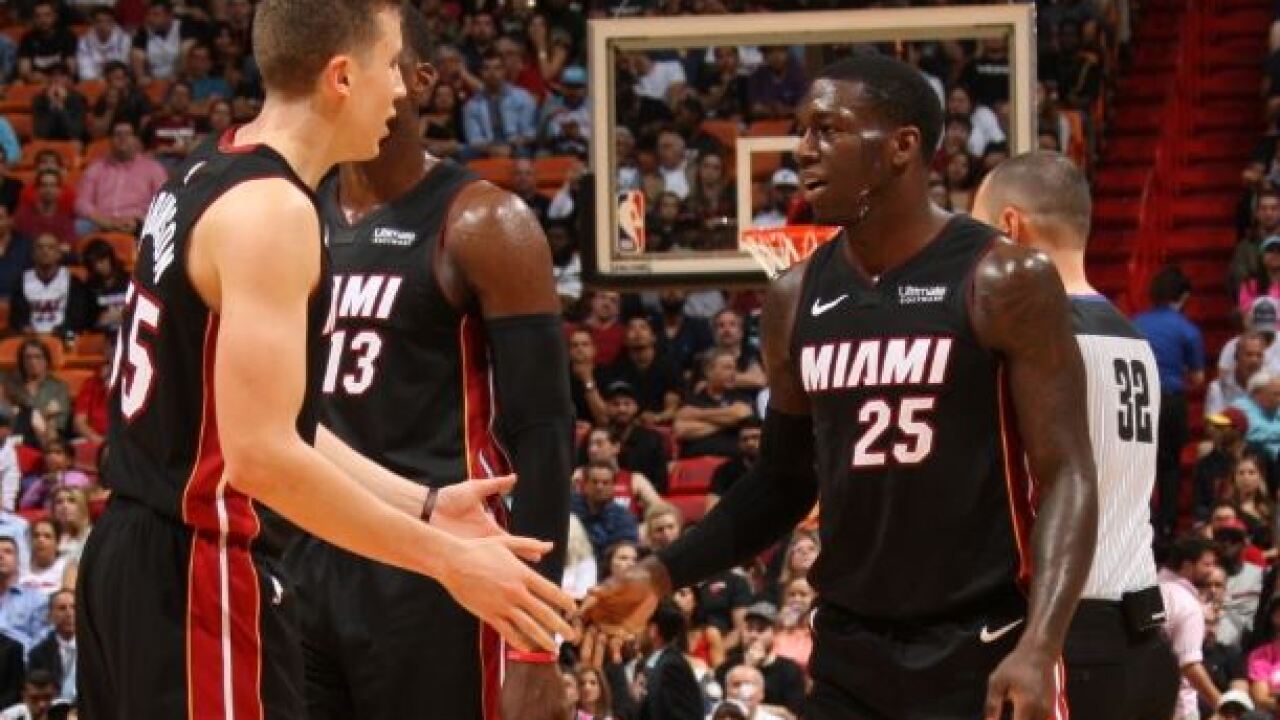 Turns out, Jimmy Butler and the Miami Heat were just getting started -- on one of the craziest stat nights in team history.

Duncan Robinson tied a franchise record with 10 3-pointers, Butler and Bam Adebayo each had triple-doubles and the Heat went on a wild late flurry to beat the Atlanta Hawks 135-121 in overtime on Tuesday night.

The Heat were down by six with 59 seconds left in regulation, the moment when Young took a celebratory walk back to the Atlanta bench for a timeout -- with Butler hearing him shout, “It's over.”

Miami scored the next 22 points, the last six of regulation and then the first 16 of overtime to improve to 18-6 overall and 11-0 at home.

And afterward, Butler couldn't resist a little jab at Young on Instagram -- a post that other NBA players like Draymond Green and Klay Thompson quickly noticed.

“Everybody in this locker room has a confidence that they're the best player on the floor at any given time,” Butler said. “Man, when you've got guys who think like that, nothing's ever over.”

De'Andre Hunter scored 28 points, and Young added 21 points and nine assists for Atlanta -- which fell to 0-3 against the Heat this season.

“What's tough is Robinson goes 10 for 14, a career high, two guys with triple-doubles, they played out of their minds a little bit with a couple guys and we still had a six-point lead with under a minute to go," Hawks coach Lloyd Pierce said. “I feel bad."

Vince Carter, in the 1,500th regular-season game of his career, scored 12 for the Hawks. Jabari Parker had 16 points and Cam Reddish added 12 for Atlanta.

The Hawks used a 13-0 run to take an eight-point lead early in the fourth, before the Heat clawed back and eventually tied the game at 111-111 on a 3-pointer by Robinson with 3:11 left.

Atlanta scored the next four to reclaim the lead, Butler missed a pair of free throws with 1:18 left and Alex Len had a dunk on the next Hawks possession for a 117-111 lead.

The rest was all Heat.

“Our energy was dead as soon as overtime started,” Young said.

In other words, it was over.

Hawks: Atlanta made 13 3-pointers in the first half, tying a team record set on three other occasions. The Hawks had only nine 2-pointers before intermission. ... Hunter returned to the starting lineup, and Reddish played off the bench. ... Kevin Huerter remains on a minutes restriction of about 25 per night, though that isn't expected to last much longer. He played 26 in regulation, then didn't play in overtime.

Heat: Miami again played without four of its six highest-paid players. Goran Dragic (groin strain), Justise Winslow (back strain), James Johnson (illness) and Dion Waiters (illness) were out. Dragic is working toward a return. Winslow has missed 14 of Miami's 24 games, Johnson has made only six appearances and Waiters has yet to play.

Barring a playoff meeting or trade, this was Carter's final game in Miami. He appeared in Miami as an opponent 36 times including playoffs, tying Allan Houston for third-most all-time behind Paul Pierce's 42 and Patrick Ewing's 37. Carter's 714 points are fourth-most of any opponent in Miami, behind Pierce's 867, Ewing's 754 and Michael Jordan's 722.

The Heat threw a “Star Wars”-themed celebration, replete with lightsabers on the court during the pregame delivery of the game ball, Darth Vader patrolling around the arena and radio analyst Ruth Riley Hunter with her hair done like Princess Leia. Heat coach Erik Spoelstra is a fan of the sci-fi saga. “Every summer, the whole family gets together in Hawaii and we end up watching ‘Star Wars,'” Spoelstra said.