Matthew Stafford: 'We have to listen' and 'can't just stick to football' while talking about racism 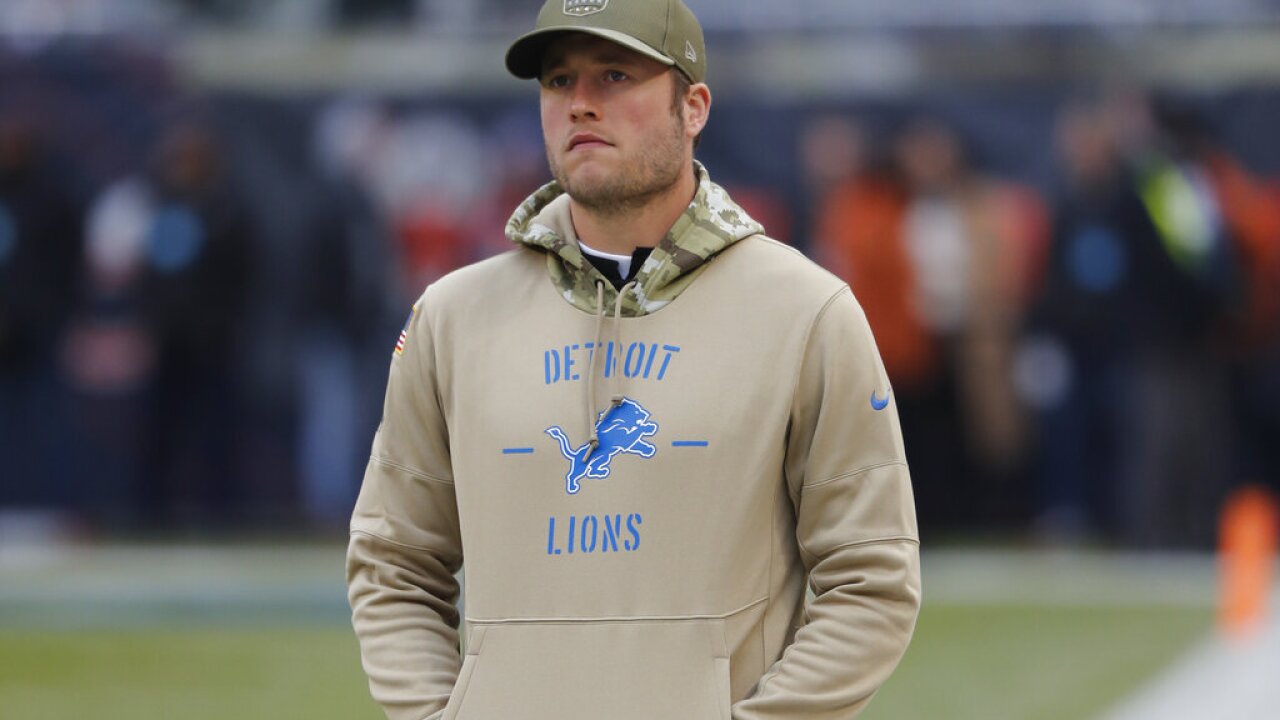 Copyright 2019 The Associated Press. All rights reserved
Charles Rex Arbogast/AP
FILE - In this Nov. 10, 2019, file photo, Detroit Lions quarterback Matthew Stafford watches from the sidelines during warmups before an NFL football game against the Chicago Bears in Chicago. Since the start of last year, Matthew Stafford has had to deal with a health scare involving his wife, his own injury problems -- and more recently, a coronavirus test that the team later described as a false positive. It's been a difficult period for the Detroit star. (AP Photo/Charles Rex Arbogast, File)

Detroit Lions quarterback Matthew Stafford, who is usually quiet when it comes to social media, published an article in The Players Tribune on Friday titled "We Can't Just Stick To Football."

In the article, Stafford said he loves football, but there are more important things going on right now.

"We can’t just stick to football. Not as a team. Not as an organization. And we shouldn’t as a country," he wrote.

Stafford said his proudest day as a member of the Detroit Lions was when the team came together, canceled practice and had conversations after the shooting of Jacob Blake.

"We had some extremely difficult conversations. We shared stories. We debated. We cried. We were vulnerable. We were uncomfortable. We were angry. We were everything.
But we went through it all as a team," he wrote.

Stafford, in the article, said police brutality, white privilege and racism are "all real.

"It’s time we stop pretending, or defending, or just closing our eyes to what’s right in front of us. We have to listen, and we have to keep having these hard conversations," he added.

Stafford then went on to tell a story about practicing in Atlanta during the offseason shortly after George Floyd was killed. He was working with Danny Amendola, a white player, and worked out together for four days without a problem.

"A week later, I went to do the same thing, at the same field, with four of my black teammates. We were just starting to dump all the footballs out on the field and some of the guys were still stretching when a gentleman came out and told us that we were trespassing — and to leave immediately," he wrote. "We didn’t even have our cleats on yet. I remember I was standing there in my socks, just kind of stunned and confused, like, What? But he didn’t even want to listen. We were still gathering up the footballs and trying to figure out another spot where we might be able to go when the gentleman pulled out his cellphone. He said, I’m calling the police.'"

Stafford said he was embarrassed to put his teammates in that situation.

"All I can ask you to do, as we continue through this NFL season, is to close your eyes and really put yourself in other people’s shoes. Try for a minute to put all the social media and the politics and the arguing aside, and look within yourself," he wrote. "Ask yourself hard questions. But more than anything, listen. It’s time."