Matthew Stafford might be playing the best football of his career 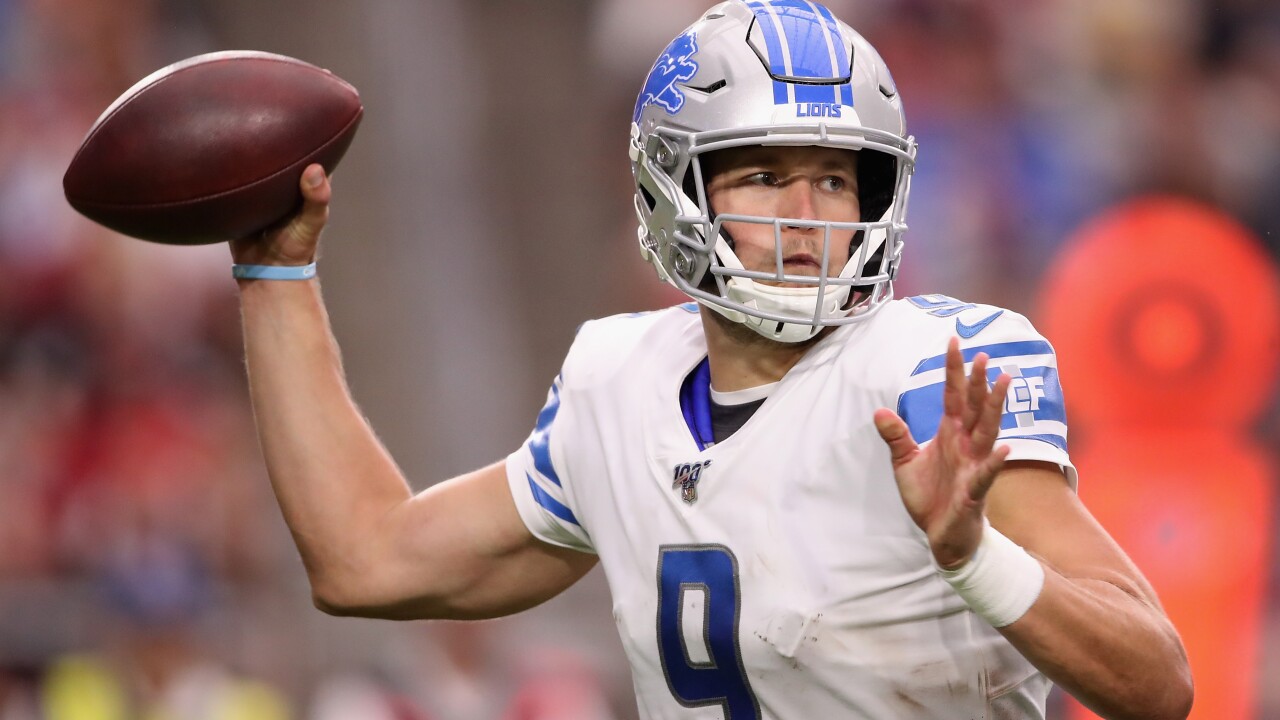 DETROIT (AP) -- The Detroit Lions wrapped up a turbulent week with an important victory -- thanks to another sharp performance by Matthew Stafford.

Stafford threw an ill-advised pass early on that was intercepted, but he played well the rest of the way, throwing for 342 yards and three touchdowns in Sunday's 31-26 victory over the New York Giants. Stafford has bounced back pretty well from a disappointing 2018. In fact, his passer rating of 105.3 would be the highest of his career if the season ended now.

Terry Bradshaw said Matthew Stafford is having his best season yet, and is having a Pro Bowl season (on FOX).

Stafford has 16 touchdown passes and only four interceptions.

"He is just a competitive, competitive guy. He always wants to be the best, and he's great," coach Matt Patricia said. "He works really hard, he's competitive, he's tough, he's grinding it out every single day."

The Lions had lost three games in a row, and last Tuesday, they announced that second-year running back Kerryon Johnson was going on injured reserve with a knee injury. That same day, Detroit traded defensive back Quandre Diggs to Seattle.

The Lions fell out of contention last year after trading receiver Golden Tate, and they certainly seemed to be heading in the wrong direction again going into the game against the Giants. But New York was a vulnerable opponent, and the Lions were playing at home. Detroit handed the Giants their fourth straight loss.

"I think the team has been working really hard. I think we had a rough couple of weeks, and I think the guys have been fighting," Patricia said. "I think they've been battling. I think we've been in a couple of close games where we had a chance to win, and that stuff is hard. These guys put a lot into this stuff, and when it doesn't go the way you wanted it to, it can weigh you down."

Lions fans were incensed earlier this season when some questionable calls hurt Detroit late in a loss at Green Bay. It should be noted, then, that the Lions were the beneficiaries of some important decisions Sunday. A running-into-the-punter call in the second quarter kept a drive alive, and Detroit ended up with a field goal. In the fourth quarter, a flag was thrown on a fourth-down incomplete pass by the Giants. But officials decided there was no foul for pass interference, and the ball went over to the Lions.

A week after Marvin Jones caught four touchdown passes, the Lions showed how many receiving threats they have. Kenny Golladay had six receptions for 123 yards and two touchdowns, and Danny Amendola caught eight passes for 95 yards.

"I'm just trying to get the ball to the guy that is open, to where the coverage tells me to throw it. I'm just trying to read every play appropriately and trust in our guys that they're going to win," Stafford said. "They are winning a bunch right now and making great plays for me, so that's just what I'm trying to do. I don't go into a game and go, `Man, I'm going to feed this guy or feed that guy."'

Detroit rushed for only 59 yards on 25 carries, so Johnson's absence was felt.

Defensive lineman Trey Flowers, a big acquisition in the offseason, has been fairly quiet since joining the Lions, but he had two sacks against New York and forced a fumble.

When the Lions traded Diggs, that suggested that they were pretty happy with their other options in the secondary, but the defensive backfield did not have a particularly good game Sunday. Darius Slay was out with an injury, and cornerbacks Justin Coleman, Rashaan Melvin and Mike Ford had problems against New York's passing game. Rookie quarterback Daniel Jones threw for 322 yards and four touchdowns for the Giants.

Adding to the secondary's issues was the fact that defensive back Tracy Walker injured his knee Sunday. Patricia said Monday that Walker is day to day.

40.2 -- Receiver Marvin Hall's average yards per catch. He has 201 yards on only five receptions this season, and he added another big play against the Giants when he caught a 49-yard touchdown pass from Stafford.

The Lions play their next two games on the road, starting this weekend against the Oakland Raiders.