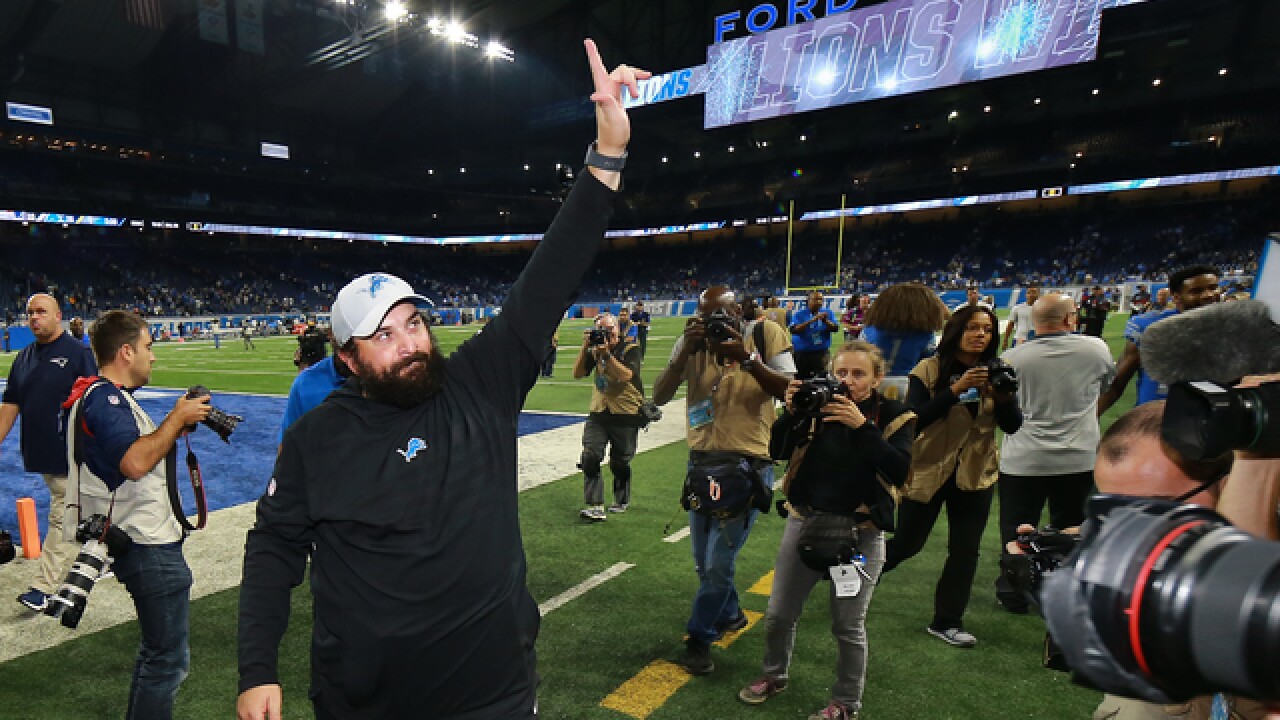 "I'm sure it meant a lot, his first win as a head coach," Detroit quarterback Matthew Stafford said. "Probably no sweeter than to do it against your old team.

"We needed this one."

The Lions (1-2) suddenly looked like a team with a plan on offense and defense under their first-year coach, and former New England assistant. They opened the season with a 31-point loss to the New York Jets at home and fell short in a comeback at San Francisco.

The Patriots (1-2) have had weaknesses exposed on both sides of the ball, losing two of their first three games for the first time since 2012.

And, Belichick was in no mood to reflect on his former defensive coordinator earning his first win.

"My job is my football team," said Belichick, who is 14-9 against former assistants. "That's what I'm worried about. That's what I'm concerned about."

Patricia and Patriots quarterback Tom Brady hugged briefly at midfield after the game.

Detroit was in control from the start, creating holes for rookie running back Kerryon Johnson and giving Matthew Stafford time to pass.

Johnson had 101 yards rushing on 16 carries, becoming the first player to reach the mark for the Lions since Reggie Bush ran for 117 yards against Green Bay on Nov. 28, 2013. Detroit's 70-game stretch without a 100-yard rusher was the longest since the NFL-AFL merger.

"We knew we needed to run the ball and take some of the pressure off Stafford and the receivers if we wanted to win this game," Johnson said. "The offensive line was hitting holes and we were attacking. That's the most physical game they've played all year, and we were able to take advantage of it."

Brady pulled the Patriots within three points on a 10-yard TD pass to James White early in the third.

Detroit refused to let the five-time Super Bowl-winning quarterback get any closer.

Stafford responded with a 33-yard TD pass, capping a 10-play, 75-yard drive that took more than 6 minutes off the clock.

Darius Slay picked off Brady's pass at the Detroit 15 midway through the fourth quarter, helping the Lions seal the win.

THAT'S COACHING
Detroit ran the play clock down often in the second half, seemingly choosing to shorten the game and keep Brady off the field.
"That was a key part of the game," Patricia said. "You certainly don't want to give the ball back to them."
Fans booed at Ford Field when Patricia chose to kick a 38-yard field goal instead of going for it on fourth-and-1.
"Any points against a team like that is going to be a good thing," Stafford said. "We had a positive drive and you would hate to come away from it with no points."
Patricia also won a challenge, getting a call overturned that gave Stafford a 5-yard touchdown pass to put Detroit ahead 10-0.

INJURY REPORT
Patriots: WR Josh Gordon (hamstring) was inactive, delaying his New England debut, after warming up with teammates. S Patrick Chung and DE Trey Flowers were inactive because of concussions. RB Rex Burkhead left the game in the second half with a neck injury.
Lions: DE Ezekiel Ansah (shoulder) was inactive.