Mariners slip past Tigers in 10 innings for series sweep 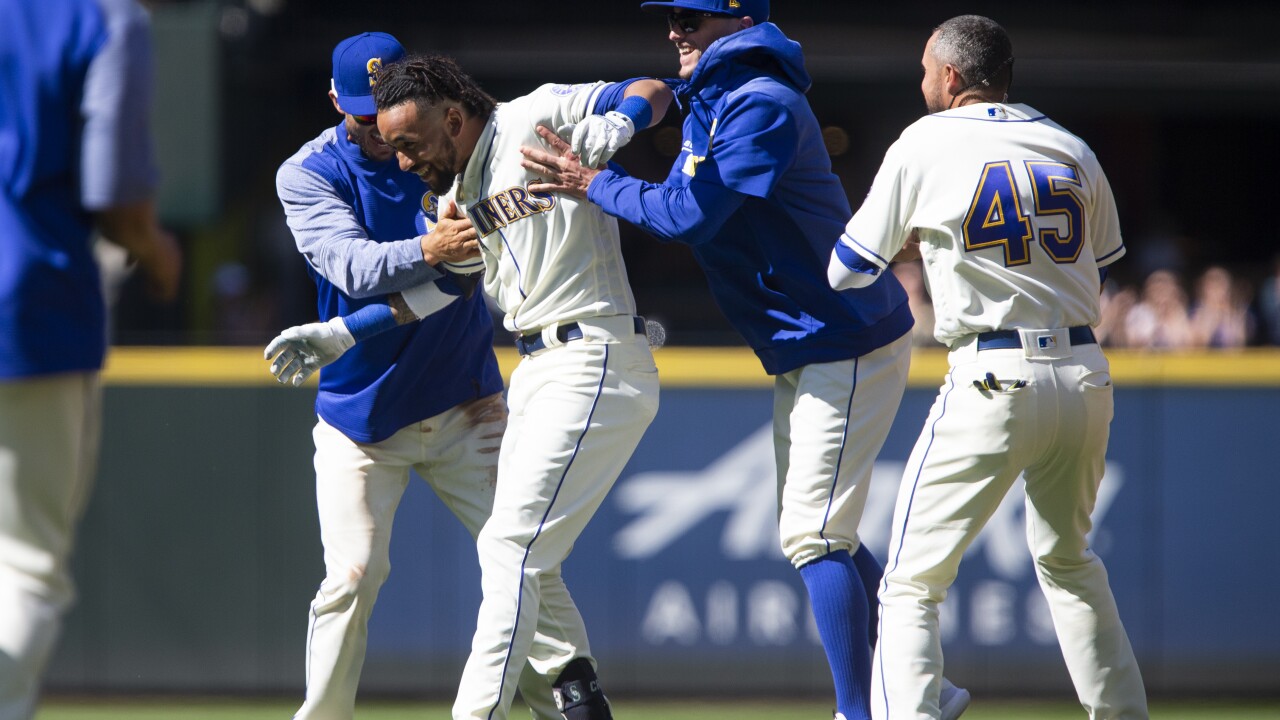 SEATTLE (AP) -- The Seattle Mariners are making a habit out of late-game heroics.

J.P. Crawford hit a walkoff single with one out in the 10th inning and the Mariners beat the Detroit Tigers 3-2 Sunday.

It was the second walkoff victory in the series for the Mariners. Mallex Smith hit an RBI single in the ninth inning to give Seattle a 3-2 win Friday.

Seattle won its fifth straight and swept a series for the first time since a four-game run against the Kansas City Royals in April.

Dylan Moore led of the 10th inning with a double against Jose Cisnero. After Mallex Smith struck out, Crawford flared a short single to center to drive in Moore.

Crawford's single dropped just out of the reach of multiple players. Moore didn't hesitate, getting an early jump and racing home with the winning run.

"Everybody's contributing which is awesome to see," Moore said.

Domingo Santana tied the game at 2-2 with his 20th home run of the season in the eighth, taking reliever Joe Jimenez deep to left field with two outs.

Santana struggled with an elbow injury earlier in the week, missing Wednesday's series finale against the Rangers and the first two games of the series against Detroit. He finished with two hits Sunday, including his third game-tying home run of the season.

Detroit starter Matthew Boyd held the Mariners to just two hits through six innings before Seattle broke through for its first run in the seventh.

A pair of walks set up Kyle Seager's one out RBI single and ended Boyd's outing.

"That's on me. I need to be sharper there at the end," Boyd said. "When you walk guys like that, it shifts the whole game."

Seager extended his hitting streak to seven games and moved past Alvin Davis for fifth on Seattle's career hit list with 1,164.

Boyd, a native of Mercer Island, Washington, struck out 10 in his third career start against his hometown team, but was left with a no-decision. It was the sixth game of 10 or more strikeouts for Boyd this season, and the seventh of his career.

Cisnero (0-2) was on the losing end of both walk-off defeats this weekend.

Niko Goodrum opened the scoring for Detroit with his 10th home run of the season, sending the first pitch he saw from Tommy Millone over the wall in right-center.

Harold Castro added an RBI single in the fifth for the Tigers, who fell to 1-16 against AL West opponents this season.

"A break is going to go our way in one of these ball games and it's going to work out for us," Tigers manager Ron Gardenhire said. "We just don't seem to get any breaks.

Millone allowed two runs on six hits while striking out five in five innings after opener Matt Wisler set down the Tigers in order in two innings.

Roenis Elias (4-2) picked up the victory for Seattle.

Seattle: RHP Hunter Strickland was reinstated from the 60-day DL after a three-game rehab assignment with Triple-A Tacoma. Strickland was originally placed on the 10-day DL with a right lat strain on March 30, and transferred to the 60-day DL on July 20. Strickland allowed one run while striking out four in three innings with Tacoma. RHP Matt Carasiti was optioned to Tacoma to make room for Strickland.

The Mariners also announced the transfer of RHP Felix Hernandez to the 60-day DL. Hernandez was originally placed on the 10-day DL with a right shoulder strain on May 12. In his last appearance, Hernandez allowed two runs on two hits in 2 ? innings for Triple-A Tacoma on June 14.

Seattle: Ryon Healy will travel to California on Monday to see a specialist for his hip, which has had him sidelined since May 20. Healy recently suffered a setback in his recovery and has no clear timetable for his return.

Detroit: Nicholas Castellanos was a late scratch from Sunday's lineup due to abdominal tightness and is day to day.