Lions get a breather amid tough stretch of opposing QBs 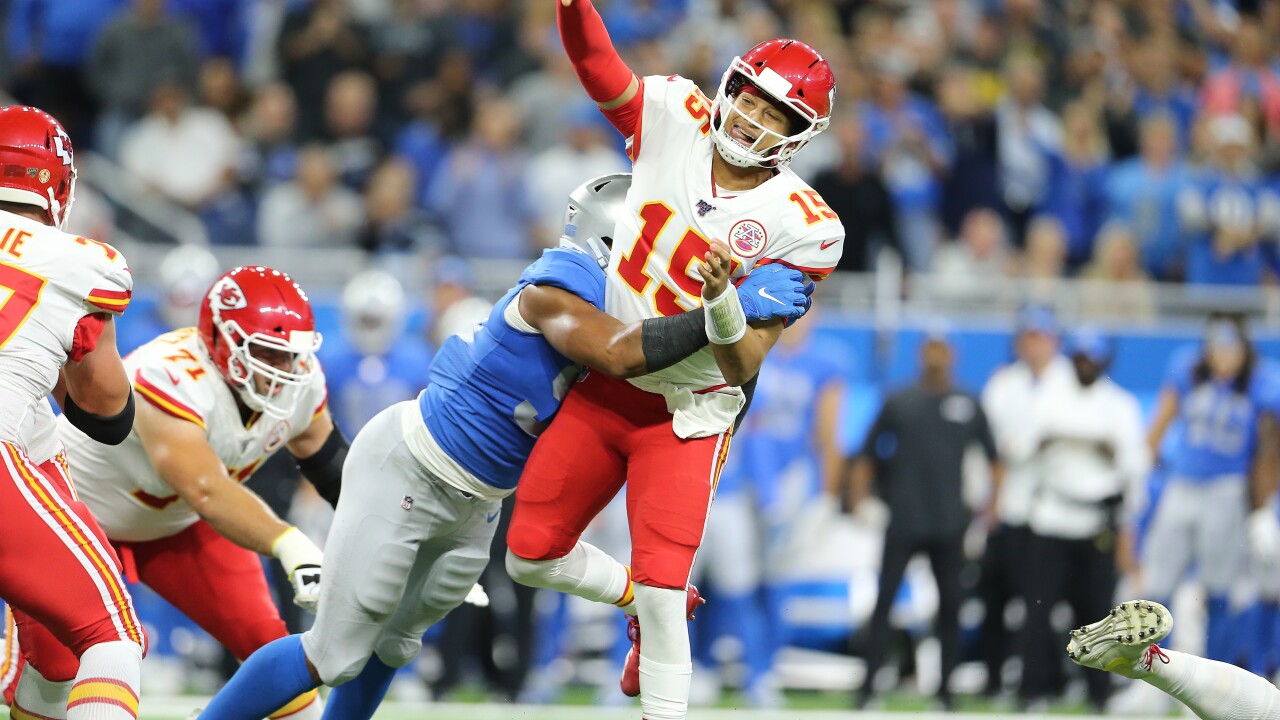 ALLEN PARK, Mich. (AP) -- Somewhere in the NFL, there are teams trying to win despite substandard quarterbacking.

That must feel like just a rumor to the Detroit Lions.

The Lions reached their open date this week after facing Philip Rivers, Carson Wentz and Patrick Mahomes in consecutive games.

When they return to the field a week from Monday, they will be at Green Bay, where Aaron Rodgers is off to another fine start. So far Detroit has held its own against this group of prolific passers. It's certainly been a challenge.

"I guess what we've done has been fairly successful," defensive coordinator Paul Pasqualoni said. "It doesn't mean that we're going to continue to go that way. It just means that it's the way we've gone so far. There are so many good quarterbacks and we're seeing another good one here as we come up -- a Hall of Fame kind of guy."

Through the first four weeks of the season, the Lions (2-1-1) allowed an opposing passer rating of just 80.3. Detroit held Rivers and Mahomes without a touchdown pass. The Lions also went on the road and beat Wentz and the Eagles. Detroit's defense hasn't necessarily dominated -- opponents are averaging more than 400 yards a game -- but given the competition, there are some encouraging signs.

"We know what we have, and we know that in a sense, we're kind of like a newly seeded plant," linebacker Jarrad Davis said. "We're starting to blossom a little bit. But we've got to keep watering, we've got to keep giving ourself that light. We've got to keep just making sure that we pay attention to things that are going to help us grow and get better."

Davis' analogy was an unusual one, but there's no question that the vibe around the Lions feels different than it did toward the beginning of last season, when Detroit seemed to be struggling with its transition to new coach Matt Patricia. The Lions finished 6-10.

They began this season with a tie against rookie quarterback Kyler Murray and Arizona, but then came that tough stretch of Rivers, Wentz and Mahomes. Detroit managed two victories, intercepting Rivers near the end of a 13-10 win over the Chargers, then holding off Wentz and the Eagles 27-24.

The Lions nearly knocked off the Chiefs last weekend, losing 34-30. Detroit couldn't hold off Kansas City at the end, allowing the winning touchdown in the final minute, but it was a credible defensive performance, especially since one of the Chiefs' touchdowns came on a fumble return.

The Lions haven't been at full strength. They faced Kansas City without standout cornerback Darius Slay, and safety Quandre Diggs left early in the game. Detroit was also without defensive tackle Mike Daniels. The defensive line was expected to be a strength, but injuries have been a concern essentially since the start of training camp.

"I think we have a mentally tough team. I think they push through any situation. I don't think our team blinks," Patricia said. "I think they kind of keep going forward and that's great to see. In the end all we want to do is win. That's our goal. That won't change."

Although the Lions appear to have made significant strides, they didn't actually win the game against Kansas City. They're also not in first place in the NFC North. Green Bay and Minnesota are tied for that spot, and they happen to be Detroit's next two opponents.

So the Lions get a breather, but the path forward remains challenging in what looks increasingly like a daunting division.