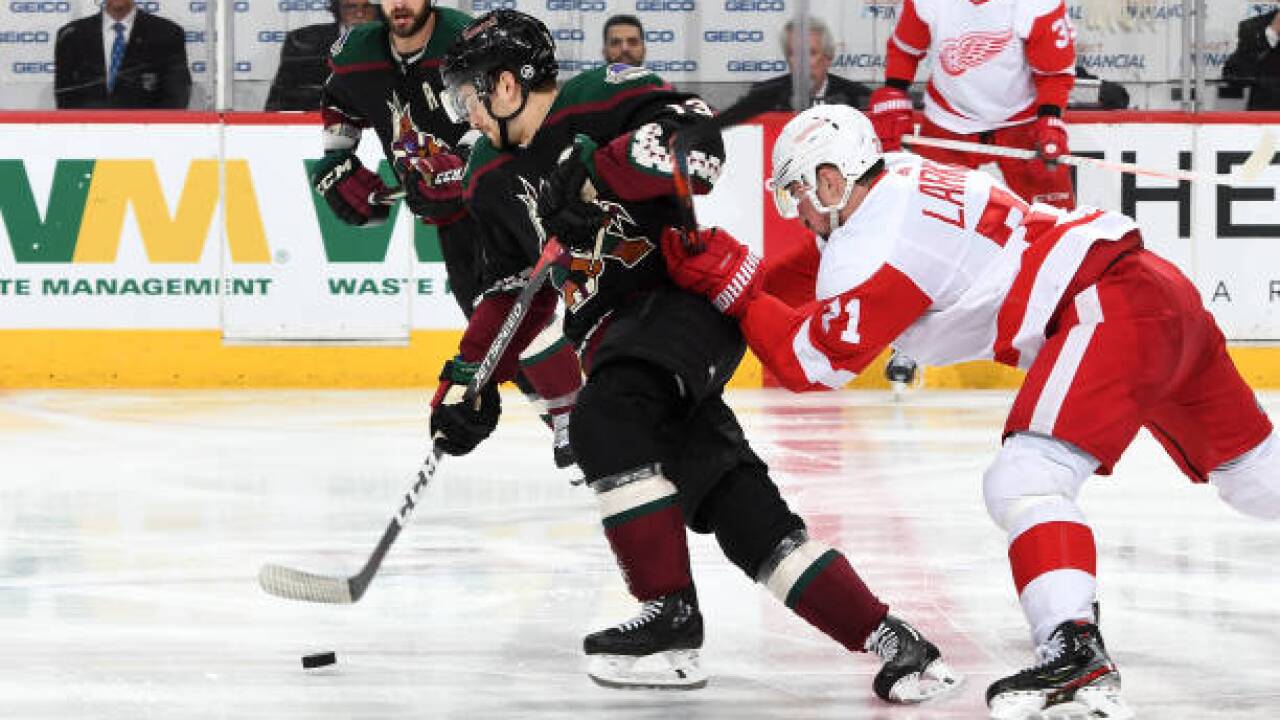 Oliver Ekman-Larsson and Vinnie Hinostroza each had a goal and assist, and the Arizona Coyotes beat the Detroit Red Wings 3-1 Saturday night for their sixth straight victory.

The Coyotes have won six in a row for the first time since Feb. 16-28, 2012, and are in contention for a Western Conference wild-card spot with 17 games left in the regular season.

Josh Archibald added his 10th goal of the season for Arizona, and Darcy Kuemper stopped 22 shots for his seventh straight win.

Hinostroza scored with the Coyotes clinging to a one-goal lead, putting in a rebound of his own shot at 4:37 of the third period.

The Red Wings had let up and thought the goal should've been disallowed, but after review it was deemed to be good, and the Coyotes moved out to a 3-1 lead.

The Coyotes, who lost 6-1 to the Red Wings in Detroit last November, struck first on Saturday and outshot the Red Wings 44-23. Ekman-Larsson's cross-ice pass found Archibald on the right wing, and his shot eluded Howard at 5:58 of the first period.

Before the period had ended, Ekman-Larsson registered his second point of the game. His shot from the left wing at 15:40 bounced up and crossed the goal line in midair before rattling out of the net.

Ekman-Larsson has a five-game point streak, with seven points in the span. He left for the dressing room midway through the second period after a mid-ice collision but returned after a few minutes.

The Coyotes were inches from an even bigger lead, but Howard made a glove save on a shot by Hinostroza from close range with 10:51 left in the first.

The Red Wings got on the board at 7:35 of the second period, in the last second of a power play. Larkin stuffed in Niklas Kronwall's pass, cutting the Coyotes' lead to 2-1.

NOTES: Former Coyotes center Antoine Vermette, who registered 149 points in 291 career games with Arizona, dropped the ceremonial first puck before the game. ... Ekman-Larsson reached 640 career games with the Coyotes, tied with Keith Tkachuk for sixth in franchise history. ... The Coyotes played their first game this season without center Derek Stepan, who is out four to six weeks with a lower-body injury suffered Thursday against Vancouver. ... Red Wings F Anthony Mantha played in his 200th career NHL game. ... The Detroit bench was issued a bench minor penalty for delay of game early in the third period.

Detroit: At Colorado Avalanche on Tuesday.