David Blough impressive in defeat in debut for Lions 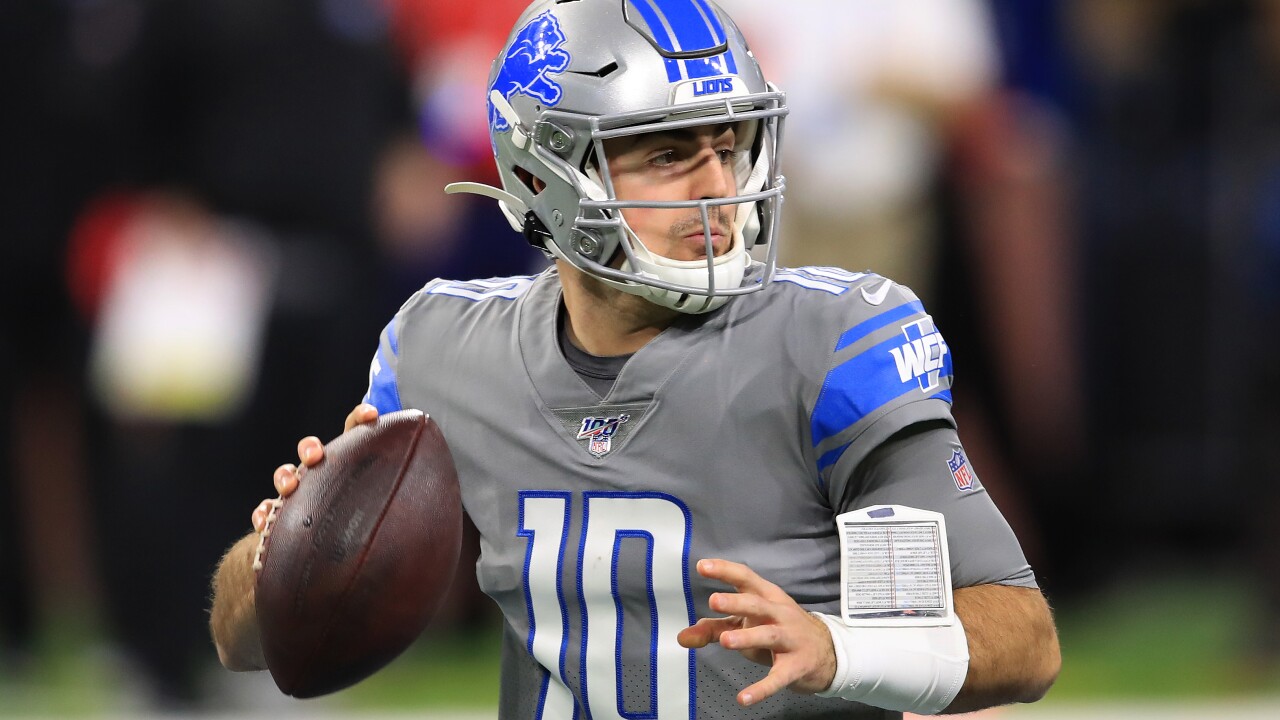 That wasn't enough for the Detroit Lions, who lost yet again despite a stirring debut from their third-string quarterback.

Blough settled in immediately, throwing a 75-yard touchdown pass to Kenny Golladay on his second pass attempt, but the Lions ultimately fell one TD short in a 24-20 loss to the Chicago Bears on Thursday. Blough -- pressed into action because of injuries to Matthew Stafford and Jeff Driskel -- threw for 280 yards and two early touchdowns.

"I've been playing football my whole life. I think one of the coolest things honestly was the amount of support I have," Blough said." When everybody found out last night, it was just -- I had to turn my phone off. There were guys -- family, friends, everybody, teammates from the past -- saying they believed in me."

Stafford missed a fourth straight game with back and hip injuries, and Driskel was dealing with hamstring problems. So Blough, an undrafted rookie from Purdue, made his NFL debut. With the Bears also struggling this season, there was every reason to expect a Thanksgiving day dud in Detroit.

But Chicago drove for a quick touchdown to start the game, then Blough went to work. After throwing incomplete on his first attempt, Blough found Golladay alone behind the defense for the touchdown that tied it at 7.

"(Offensive coordinator) Darrell Bevell had a great idea to kind of pump it against a coverage that we expected to get," Blough said. "Sometimes the stars just align, and he's 10 yards open, and you can throw a lollipop to him and he can score."

Blough also led a 78-yard drive on Detroit's second possession, which ended when he threw an 8-yard scoring pass to Marvin Jones.

"I think you guys obviously got a glimpse of him, and what we've all seen every single day," Lions coach Matt Patricia said. "His confidence, his ability to go out and compete, his focus, and how much he loves this game."

The Lions led 17-7 late in the second quarter before the Bears rallied. It was 17-all when Blough directed a 15-play, 70-yard drive that took 8:57 off the clock, but Detroit had to settle for Matt Prater's 24-yard field goal.

The Bears scored the winning touchdown with 2:17 remaining. Even after that. Blough and the Lions reached the Chicago 27. After a 1-yard completion, Blough threw incomplete and then was sacked, leaving Detroit facing fourth-and-22.

Blough's deep pass under pressure was picked off by Eddie Jackson for the Detroit quarterback's only interception of the game.

The Lions, who have lost eight of their past nine, have plenty of time before their next game, Dec. 8 at Minnesota. It's not clear what the health of their other quarterbacks will be like then, but Blough may have done enough to earn another shot.